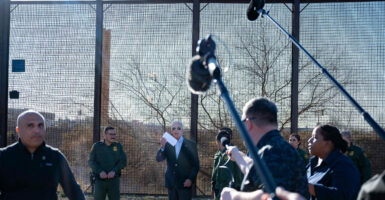 Stung by criticism that he had not been to the southern border during his nearly two years in office to see firsthand the consequences of his open-borders policies, President Joe Biden poses in front of the U.S.-Mexico border fence in El Paso, Texas, in a photo-op on Sunday. (Photo: Jim Watson/AFP/Getty Images)

The Biden administration’s open-border policies and its refusal to fully enforce federal immigration laws have imposed huge costs on local communities across the country. Border states are groaning under the enormous cost of sheltering, feeding, educating, policing, and providing medical care for tens of thousands of illegal aliens.

There are humanitarian costs, as well, paid by those who are assaulted and killed by the human traffickers, those who die from the fentanyl flooding across the border, and those victimized by vicious criminals who have entered illegally.

This crisis is unprecedented. And it is entirely man-made. Put more precisely: It is Biden-made.

The numbers don’t lie. In fiscal year 2022, ending Sept. 30, U.S. Customs and Border Protection reported a record 2.76 million alien “encounters” at our border. CBP reported another 278,102 in October and an even-more-staggering 283,189 in November. More than 3 million illegal aliens will have crossed our border illegally in the past 15 months—all because of the administration’s irresponsible stewardship of the Department of Homeland Security.

And that number is conservative. It doesn’t include the “gotaways”— those who made it across the border illegally, without getting caught. Border officials estimate there were at least 600,000 “gotaways” in fiscal year 2022, compared to only 60,000 in fiscal year 2020.

Supporters of open-border policies argue that this flood of illegal aliens is beneficial. Try telling that to the victims of violent crimes committed by illegal aliens who should never have been allowed to enter the United States.

Texas is one of the few states that provides reports on crimes committed by aliens, and the numbers are appalling. The latest report from the Texas Department of Public Safety notes that, from June 1, 2011, through Dec. 31, 2022, more than 389,000 criminal aliens were booked into local Texas jails. The U.S. Department of Homeland Security confirmed that 70% of those arrested were here illegally.

Keep in mind that DHS can only confirm the illegal status of aliens who were previously detained by DHS and had their fingerprints entered into the department’s alien database.  Given the huge number of “gotaways” whose fingerprints never make it into the system, it is highly likely that many more of those arrested are also here illegally.

Sanctuary states like California and New York deliberately refuse to collect or report this data. But we know that Americans are being killed and victimized all over the country. Just ask the families of the victims of criminal aliens at organizations like The Remembrance Project.

The violence, bloodshed, and mayhem caused by these criminals should shock the conscience of every government official, particularly President Joe Biden, Vice President Kamala Harris (his designated “border czar”), and Department of Homeland Security Secretary Alejandro Mayorkas. Those three have worked to obstruct the enforcement of our immigration laws and destroy the security of our borders.

Biden’s latest proposal for mass amnesty and mass parole would only make the problem worse.

Disregarding their fundamental duty to protect the public, they refuse to prosecute most misdemeanors, water down violent felonies, turn a blind eye to most illegal drug offenses, and refuse to seek cash bail for known criminals. These policies send a loud message to those inclined to commit crimes: Go ahead and do it!

One of the many reasons why people from all over the world come to the U.S. is because they want to live in a country where the rule of law, undergirded by the Constitution, matters and is honored. The rule of law is the cornerstone of an ordered society.

But when “progressive” officials—from the president down to local district attorneys—refuse to enforce the law, chaos ensues.

It’s time to end the chaos, enforce the law, and hold Biden and all federal and state executive branch officials accountable for failing to do their jobs.