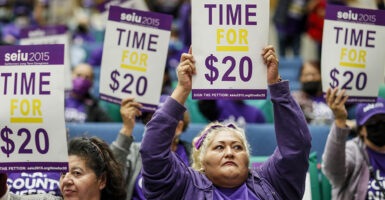 Rebekah Millard is a litigation counsel at the Freedom Foundation.

In its landmark Janus v. AFSCME ruling four years ago, the U.S. Supreme Court struck down a decades-old precedent that 22 left-leaning states used to justify forcing millions of public employees to join or fund a labor union against their wishes. Despite this decision, several unions have used legal action—and illegal actions—to try to prevent employees and their dues from leaving.

Since the Janus decision, several hundred thousand government workers have parted company with their unions—and kept hundreds of millions of dues dollars in their own pockets—after deciding the association no longer made sense for themselves and their families.

The question is how many more would have done the same if information about the Janus decision and the freedom to exercise the rights it affirmed had not been actively suppressed by the very unions claiming to have only their members’ best interests at heart.

Literally, before the ink on the ruling had dried, union leaders had concocted a laundry list of shady schemes to skirt the court’s clear intent, if not ignore it altogether. This included limiting defections to an arbitrary, union-created two-week annual opt-out “window.” It also included conspiring with union operatives in government agencies to block organizations from legally obtaining employee contact information to tell workers what the unions didn’t want them to know.

Horrified by the prospective loss of hundreds of millions in dues revenue that they had used to line their own pockets and to corrupt elected officials for generations, public-sector union leaders resolved to find ways to limit requests for freedom from union membership. They did so with preemptive intimidation in the workplace and—for those who didn’t frighten easily—legal action.

And when those tactics weren’t enough, there was always fraud to fall back on.

In approximately a dozen cases currently being litigated in the West Coast states of California, Oregon, and Washington, public employees were denied the right to opt out because their unions produced forged documents claiming they were valid union dues authorization agreements.

Two such cases, in fact, were appealed to the Supreme Court in December.

In the first case, Zielinski v. SEIU 503, the 9th U.S. Circuit Court of Appeals let stand a lower court ruling that no constitutional issue was raised despite the reality that the state of Oregon’s largest public employee union—the Service Employees International Union—forged the plaintiff’s signature twice on two separate dues authorizations. The court concluded that as long as the union said that it had the employee’s permission, the state may rely on the union’s statement.

In the second case, Wright v. SEIU 503, the union forged the employee’s signature electronically. While the court presumed the forgery took place, the 9th Circuit concluded neither the state of Oregon nor the union had any constitutional duty to obtain consent from the employee.

The Janus ruling, authored by Justice Samuel Alito, makes unequivocally clear that states cannot force a public employee to pay money to a union unless he or she has provided affirmative consent in the form of a waiver of his or her First Amendment rights to free association.

The state of Oregon and SEIU 503 have long demonstrated they have no respect for workers’ rights. Now, the 9th Circuit has rubber-stamped the state’s decision to let unions take what they want from individual workers—with or without their consent.

More to the point, when the same shady tactics crop up again and again in cases involving essentially the same defendants and the same motives, it can’t simply be written off as coincidence.

Taken collectively, the forgery cases clearly suggest a coordinated strategy on the part of unions panicked into breaking the law at the prospect of losing hundreds of millions of dollars in dues money when members they’ve spent decades preying on discover that the power to decide about workplace representation has always been in their own hands.

The Supreme Court made its intentions in Janus crystal clear. Public employees have an iron-clad First Amendment right to keep their jobs even if they choose to have nothing to do with a union.

And they can opt out on their terms, not those dictated—let alone forged—by union thugs.