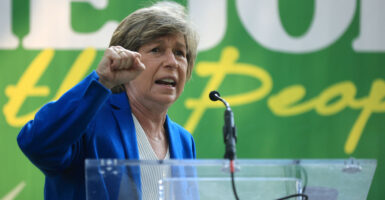 Teachers unions and liberal interest groups organize to move entire slates of candidates and their voters in their favor. Pictured: Randi Weingarten, president of the American Federation of Teachers, addresses a rally near the U.S. Capitol on Sept. 14, where activists called on the Senate to pass HR 1. Misleadingly named For the People Act, HR 1 is packed full of mandates to guarantee Democrats control future elections. (Photo: Chip Somodevilla/Getty Images) 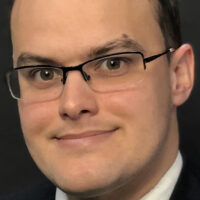 Liberal special interests have effective control of many municipal governments and government arms. The most notable case is school boards.

The teachers union’s endorsement frequently determines the winner of school board races. The endorsed board members do the union’s bidding, as school closures and eternal mask mandates during the COVID-19 pandemic demonstrate.

Liberal partisans see what they think is voter suppression when conservatives pass legislation that guarantees only each eligible voter casts a single private ballot. Once in power, these liberal special-interest groups are more than capable of actually exploiting electoral systems.

Teachers unions and other practitioners of the organization game gain an advantage when the elections they care about are the only game in town on a given election day.

Turnout for off-cycle elections held outside the every-other-November federal election cycle is always lower. As a result, the motivated core of loyal, dues-paying supporters (like, say, the membership of a teachers union) an organized interest commands carries more weight than during a presidential general election or a congressional midterm.

But in the 2020 presidential general election, the number of Chicago ballots cast was over 1.1 million. If the mayoral election were held concurrently, the Chicago Teachers Union’s theoretical bloc of voters would halve in proportion.

The Manhattan Institute released a report recommending the alignment of municipal elections with federal and state general elections. Reviewing academic research, its author concluded that “not only are local governments elected off-cycle chosen by fewer and less representative citizens … they are less likely to authentically represent the will of democratic majorities in their community.”

But off-cycle elections aren’t the only way teachers unions can use municipal election weirdness to their advantage. Nonpartisan races also advantage permanently organized interests, and this can lead to the election of school boards wildly out of ideological and practical alignment with communities.

Further, local, state, and national political parties and party committees push money and operational support into electing partisan candidates. In nonpartisan races, they usually don’t and may even be prevented from doing so by law.

But there are entities that will provide money and operational support: teachers unions and other government worker unions. Infamously, the teachers union endorsement—the “apple ballot”—can be near-determinative for election to a nonpartisan school board.

That endorsement not only comes with the coveted “educator endorsed” tag, but also campaign funds, slate-cards, and door-knockers—the sort of stuff that political parties do in normal elections that are denied to the unions’ opponents in the “nonpartisan” race.

The final piece of the union-advantage puzzle is the method of election. American federal elections and most states’ legislative elections are conducted by some form of single-member district election (by “first past the post”—most votes wins—in most states and ranked-choice voting in a handful).

But in many local elections, block voting is used. In block voting, a voter can vote for as many candidates as there are seats available. The candidates with the most votes win.

This is a massive advantage for organized interests that can endorse entire slates of candidates and move voters in their favor, while disorganized opponents either under-vote or even cast votes unknowingly for the slate they would rather not support.

What happened in Washington County, Maryland, a Republican stronghold, is one example of how block voting and nonpartisan races can create results out of alignment with a community’s interests. The teachers’ union slate won the block-elected school board races and, as a result, in the fall of 2020 the county kept its public schools locked down.