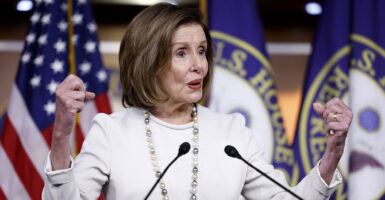 It is unprecedented for a lame-duck Congress to jam through an omnibus spending bill after the American people voted out the majority party in the House of Representatives.

However, Senate Republican leadership has worked with outgoing House Speaker Nancy Pelosi for one last liberal spending blowout before the conservative majority takes control of the House on Jan. 3.

The omnibus spending bill is loaded with thousands of earmarks, which are line-item funding for specific pet projects directed by members of Congress.

Many of these earmarks would advance the Left’s extreme agenda and fund its institutions using the taxpayer’s money. House Appropriations Chairwoman Rosa DeLauro, D-Conn., bragged that the omnibus “fulfills 98% of Democratic member requests in the House, with $5.4 billion for 3,213 Democratic projects.”

The types of woke-waste line items that some Senate Republicans will help fund, unless they change their minds, include these 12 projects:

These types of woke projects have no place in the federal budget.

House Republicans could have banned the corrupt practice of earmarking. But the GOP agreed to keep the pork money flowing with a 158-52 vote in November.

The earmarks in this omnibus spending bill should be a wake-up call to the dangers of allowing earmarks back into Congress’ appropriations process.

Rather than rubber-stamping these earmarks and the $1.85 trillion omnibus, lawmakers should kick government spending into next year. Then the new Congress can draft responsible bills that reflect the values of all Americans and cut wasteful spending.