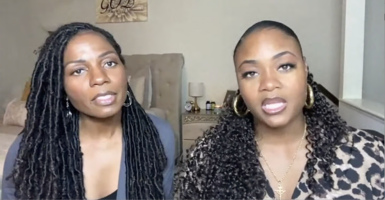 The Justice Department announced Friday it is charging two more pro-life women with violations of the Freedom of Access to Clinic Entrances (FACE) Act.

Bevelyn Beatty Williams, 31, and Edmee Chavannes, 41, are accused of trying to stop abortions from taking place, thereby violating the FACE Act in what the DOJ described as “a multi-year campaign to interfere with individuals seeking to obtain and provide lawful reproductive health services in New York and in several other states.”

In one instance, according to FBI Assistant Director in Charge of the New York FBI office Michael J. Driscoll, Williams reportedly injured an abortion clinic employee while attempting to block abortions from taking place in the building.

The two women surrendered to authorities on Friday and will be presented in the United States District Court for the Eastern District of Tennessee, the DOJ said in a release.

“As alleged, the defendants repeatedly attempted—including by using threats, and on at least one occasion, force—to prevent individuals from accessing their legal right to reproductive health services,” U.S. Attorney Damian Williams said in a statement. “This Office will remain committed to ensuring that healthcare facilities, their staff, and those seeking to obtain reproductive health services can continue to do so without unlawful interference.”

Videos purportedly show Williams and Chavannes, who are both black, trying to speak to Black Lives Matter activists about the dangers of abortion to the black population. In 2020, Williams was reportedly stabbed along with multiple Proud Boys during Black Lives Matter protests in Washington, D.C.

The two pro-life activists did not immediately respond to requests for comment.

Williams and Chavannes reportedly used “force, threats of force, and physical obstruction” to “injure, intimidate, and interfere” with women seeking to abort their unborn babies, according to an indictment unsealed in Manhattan federal court on Friday, the DOJ said.

She also said on the following day, according to the indictment: “We gonna stand here and we ain’t moving. We not moving. We’re standing here, so I guess no women will be coming in for abortions today. It’s a warzone.”

The indictment notes that Williams and Chavannes also sought to stop women from aborting their babies in Florida, Tennessee, Georgia, and Brooklyn, New York.

“The maximum potential sentences are prescribed by Congress and are provided here for informational purposes only, as the sentencing of the defendants will be determined by a judge,” the DOJ release said.

The Justice Department has been using the FACE Act to target pro-life activists as a response to the overturn of Roe v. Wade, Associate Attorney General Vanita Gupta said earlier this month.

At least 98 Catholic churches and 77 pregnancy resource centers and other pro-life organizations have been attacked since May, but the DOJ has apparently not charged a single person in connection with these attacks. Meanwhile, the DOJ’s Civil Rights Division has charged almost 30 pro-life individuals with FACE Act violations this year.

The DOJ has not responded to The Daily Signal’s requests for comment on this point.