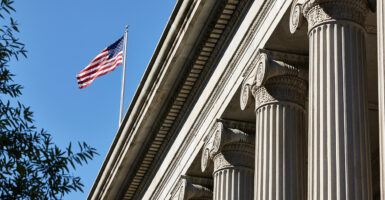 "Although the slowdown in inflation is certainly welcome, it’s not a sign of things to come. The latest data illustrate why families cannot afford to live in Biden’s America,” The Heritage Foundation's EJ Antoni says. Pictured: The U.S. flag waves in the sunshine over the columns of the Treasury Department. (Photo: Bjarte Rettedal/Getty Images)

An economist says the average American family has effectively lost more than $7,000 due to inflation and higher interest rates since President Joe Biden took office.

The consumer price index, a key inflation measure, increased 0.1% in November, up 7.1% from November 2021, the U.S. Bureau of Labor Statistics reported Tuesday. The figure marks a slowdown in rampant inflation, but not a reversal of the trend that has caused prices for everyday goods like food and gas to ratchet up in recent months.

“Although the slowdown in inflation is certainly welcome, it’s not a sign of things to come. The latest data illustrate why families cannot afford to live in Biden’s America,” EJ Antoni, a research fellow for regional economics in the Center for Data Analysis at The Heritage Foundation, said in a Tuesday report. (The Daily Signal is Heritage’s multimedia news organization.)

“Under Biden, prices have risen so much faster than wages that the average family has lost $5,800 in real annual income. That loss is thanks to the ‘hidden’ tax of inflation, caused by the Biden administration and congressional Democrats’ policies,” Antoni said.

Higher interest rates are now costing the typical family another $1,300 annually. Combined with a lower real income, this effectively costs families a total of $7,100 in annual income under Biden.

“An unexpected decline in the prices of beef, used vehicles, and vehicle rentals caused the latest inflation data to come in below expectations. While those price decreases are a welcomed relief for consumers, the decrease is being driven by a drop in demand, not an increase in supply,” Antoni told The Daily Signal in a statement.

“In other words, people simply cannot afford these items at current prices, so consumers are buying less, driving prices down. It is more a sign of desperation than wealth,” Antoni explained.

The November report marked an improvement over some economists’ expectations that the consumer price index increased 0.3% last month and 7.3% since Nov. 2021, CNBC reported.

Biden weighed in on the consumer price index report earlier today in remarks at the White House.

“This morning, we received some welcome news, in my view — and I think the view of most economists — on the economic front, news that provides a reason for some optimism for the holiday season and, I would argue, for the year ahead.  And we learned last month’s inflation rate came down, down more than experts expected,” the president said.

“In a world where inflation is rising at double digits in many major economies around the world, inflation is coming down in America,” Biden said. “In fact, this new report is the fifth month in a row where annual inflation has fallen in the United States. Inflation outside of food and energy, a key measure of — that economists use, also fell.”

Antoni pushed back on Biden’s comments.

“He is right to say inflation is going down, but that is not the same as prices going down. Inflation going down means that prices are still rising, just not quite as fast as before. A 7.1% inflation rate is still horrific. It means prices will double in about a decade,” Antoni said.

Treasury Secretary Janet Yellen said she “[believes] inflation will be lower” in 2023 during a “60 Minutes” interview with CBS’ Norah O’Donnell on Sunday.

“So I believe inflation will be lower. I am very hopeful that the labor market will remain quite healthy so that people can feel good about their finances and their personal economic situation,” Yellen said when asked what the new year will “look like for the average consumer.”

O’Donnell noted that “it’s been decades since the American consumer has had to deal with inflation like this.”

Yes, and I hope that it will be short-lived. We learned a lot of lessons from the high inflation we experienced in the 1970s.

And we’re all aware that it’s critically important that inflation be brought under control and not become endemic to our economy. And we’re making sure that that won’t happen.

Many Americans are struggling to afford groceries and have adjusted their grocery shopping habits throughout the past year, according to a Swiftly survey released last week.

Inflation and rising food costs are impacting most consumers’ grocery shopping habits, with over two-thirds struggling to pay their grocery bills.

Nearly half [of consumers] are shopping based on discounts and promotions; however, a majority spend an hour or less planning their grocery shopping trip, including time looking for discounts.

The producer price index, which “measures the prices that businesses are having to pay,” rose 0.3% last month, up 7.4% since Nov. 2021, the Bureau of Labor Statistics reported on Friday.

The bureau plans to release the December consumer price index on Jan. 12.