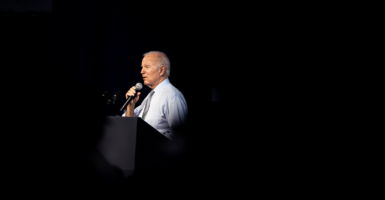 An economist says the average American family has lost upward of $7,000 due to inflation.

The consumer price index increased 0.4% in October, up 7.7% from Oct. 2021, the U.S. Bureau of Labor Statistics reported on Thursday.

“American are being crushed by higher prices. The average family has lost $6,100 in real income (how much their wages can actually buy) under President Joe Biden and rising interest rates have added another $1,300 in higher borrowing costs,” EJ Antoni, a research fellow for regional economics in the Center for Data Analysis at The Heritage Foundation, told The Daily Signal in a statement. (The Daily Signal is Heritage’s multimedia news organization.)

“These effects have effectively made the average family $7,400 poorer,” Antoni said.

“With winter setting in, Americans are facing 19% higher heating bills on average, due to the administration’s war on American energy,” Antoni said.

Joel Griffith, a research fellow in the Thomas A. Roe Institute for Economic Policy Studies at The Heritage Foundation, said that “today’s painful numbers don’t fully reflect the pain experienced by families.”

“Inflation is a direct result of politicians recklessly abandoning common sense and stewardship throughout the past couple of years,” Griffith said.

Biden said in a statement that “today’s report shows that we are making progress on bringing inflation down, without giving up all of the progress we have made on economic growth and job creation.”

“My economic plan is showing results, and the American people can see that we are facing global economic challenges from a position of strength,” said Biden.

In September, the consumer price index rose 0.4%, showing that inflation remained at a near four-decade high of 8.2%, the U.S. Bureau of Labor Statistics reported last month.

The next consumer price index report will be released on Dec. 13.