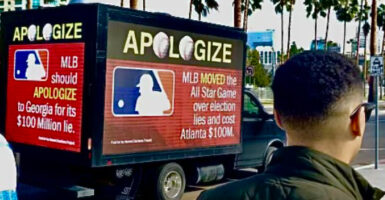 The Coca-Cola Co. and Major League Baseball both owe Georgia an apology, according to the Honest Elections Project.

The voter integrity group has launched a five-figure ad campaign targeting Coke and MLB, which claimed that Georgia’s election reform law—passed in 2021—would lead to “voter suppression.”

“Coca-Cola is based in Atlanta, and it bought into the Left’s lies about voter suppression,” Jason Snead, executive director of the Honest Elections Project, told The Daily Signal in a phone interview. “What we saw in the November elections blows those lies out of the water.”

The organization bought a full-page ad in The Atlanta Journal-Constitution calling for Coca-Cola to issue an apology.

The ad notes that Coke said the Georgia law would deter voting, even though Georgia had record early and absentee voting for the 2022 midterm elections. The ad concludes: “Coca-Cola should apologize for putting woke politics over safe and secure elections.”

It also paid for a billboard truck to drive around Major League Baseball’s Winter Meetings this week in San Diego. The billboard said, “Apologize. MLB lied about Georgia’s election law and moved the All-Star game,” and “MLB should apologize to Georgia for its $100 million lie.”

The Georgia legislation, signed into law by Gov. Brian Kemp, a Republican, extended voter ID requirements to absentee balloting, established guidelines for ballot drop boxes, aimed to shorten lines at polling places, and gave the State Election Board more oversight over election administration in the counties.

The Honest Elections Project interviewed several voters Nov. 8 in three Georgia counties: Fulton, Gwinnett, and Cobb. Voters generally said they were not aware of voter suppression themselves, although some said they believed it must be happening somewhere.

Coca-Cola weighed in on the voting law in 2021 after activists staged a “die-in” at its Atlanta headquarters. Once Coke spoke out against the law, more than 100 other companies joined in attacking the new law.

“We want to be crystal clear and state unambiguously that we are disappointed in the outcome of the Georgia voting legislation,” Coca-Cola said in an April 2021 statement. “Throughout Georgia’s legislative session we provided feedback to members of both legislative chambers and political parties, opposing measures in the bills that would diminish or deter access to voting.”

Major League Baseball pulled the All-Star Game out of Atlanta that year.

“Major League Baseball pulled the All-Star Game out and cost Atlanta hundreds of millions of dollars in revenue,” Snead said. “These companies owe Georgia an apology. … I like to be an optimistic guy and believe these companies will tell Georgians they were wrong.”

For the primary election, Georgia had record voter participation, about four times higher than in 2018, the last non-presidential year.

Early voting hit a record high before the 2022 general election, the Atlanta Journal-Constitution reported. However, since Election Day voting was lower, overall turnout was similar to the 2018 election, according to the newspaper.