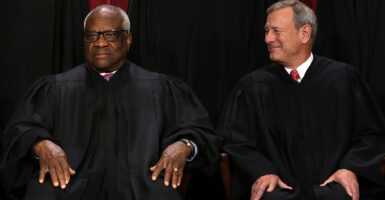 “It’s not even out of the cradle yet and you’re throwing it under the bus,” Chief Justice John Roberts tells the Biden administration's lawyer Tuesday, referring to the Supreme Court's June ruling on immigration policy. Pictured: Roberts, right, with Justice Clarence Thomas while sitting Oct. 7 for the high court's official portrait in Washington. (Photo: Alex Wong/Getty Images)

The Supreme Court heard oral arguments Tuesday in a lawsuit filed by Texas and Louisiana over Biden administration guidelines that severely restricted the Department of Homeland Security’s enforcement of federal immigration law against illegal aliens.

Twenty other states supported Texas and Louisiana with amicus briefs, ranging from Arizona to Florida and West Virginia to Wyoming. The Biden administration was appealing a federal district court judge’s ruling vacating its Sept. 30, 2021, guidelines nationwide after the judge concluded they violated U.S. law.

The guidelines are remarkably forthright in admitting the administration’s intent to minimize enforcement efforts and to remove as few illegal aliens—“undocumented noncitizens,” the guidelines call them—as possible.

According to the administration, the misnamed “enforcement” efforts of the Department of Homeland Security are to be “guided by the fact that the majority of undocumented noncitizens who could be subject to removal have been contributing members of our communities for years” and the fact that they are here illegally “should not alone be the basis of an enforcement action against them.”

Notice the complete absence of any reference to what the law actually requires.

The Biden administration’s memo set three priorities for removal of illegal aliens: those who pose a threat to national security, to public safety, or to border security. But the restrictions imposed on DHS agents carrying out those priorities limited their effectiveness.

For example, only “serious criminal” conduct could be considered in assessing a threat to public safety, and DHS agents had to consider the “individual and the totality of the facts and circumstances” such as the “sophistication” of the crime and the “nature and degree of harm caused by the criminal offense.” An entire list of “mitigating” factors could prevent detention or removal of an illegal alien.

Texas and Louisiana claimed this type of individualized review and discretionary decision-making violated federal law, specifically 8 U.S.C. §§ 1226(c) and 1231 (a)(2), which mandate that the executive branch “shall take into custody” or deport aliens convicted of specific types of crimes or who have final orders of removal issued against them by immigration judges.  Shall means shall (i.e., must), Texas argued in the lower court.

The district judge agreed, saying that the Biden administration offered an “implausible construction of a federal law that flies in the face of the limitations imposed by Congress” and that it was invoking “discretion and prioritization in an effort to evade meaningful judicial review.”

In two and a half hours of complicated legal arguments Tuesday, the Supreme Court questioned the lawyers not only on these substantive issues, but on whether the states even had standing to bring a lawsuit in the first place.

There is no way to discern how the high court will rule based on the arguments and the questions raised by the justices. However, some of the conservative justices sharply questioned arguments made by the federal government.

The solicitor general of the U.S., Elizabeth Prelogar, for example, argued that the states had no standing to sue the federal government, no matter how much they are damaged by the policy implemented by the Biden administration.

She also argued that the word “shall” in the immigration statutes—as in the federal government “shall” detain aliens convicted of particular crimes—does not actually mean “shall,” and the Biden administration instead has the “discretion” to decide which aliens it will detain.  In essence, she argued that the administration has the “discretion” to decide whether to comply with the law.

This is blatantly inconsistent with the Supreme Court’s June 2022 decision in Biden v. Texas—and Prelogar’s argument—that the administration could end its predecessor’s Migrant Protection Protocols (the “Remain in Mexico” policy) because that statute reads “may” rather than “shall.”

Chief Justice John Roberts sharply questioned Prelogar about her claim that states never have standing to “challenge immigration policies concerning apprehension or removal of aliens.” Roberts himself pointed out that the solicitor general’s claim conflicted with the Supreme Court’s decision at the end of last term in Biden v. Texas over the Biden’s administration’s cancellation of the “Remain in Mexico” policy implemented by the Trump administration.

The chief justice said he thought she would “have a little more concern about an opinion of ours that’s 4 months old” and chided her, saying, “It’s not even out of the cradle yet and you’re throwing it under the bus.”

Justice Samuel Alito was also skeptical of the government’s standing argument after Prelogar made the claim that while an individual might have standing to sue over “proprietary harms” or financial damages, states do not. This is an important consideration due to the enormous financial costs the states claim to suffer due to the Biden administration’s immigration policies.

Alito called this claim by Prelogar a “rule of special hostility to state standing” and said it conflicted with Supreme Court decisions that there should be “special solicitude for state standing.”

Justice Brett Kavanaugh also seemed surprised by the government’s position. He followed up by asking Prelogar whether she was saying that if a new administration came into office and decided it wouldn’t enforce any federal labor or environmental laws, no state would have standing to sue.

Amazingly, Prelogar said that was exactly the position the Biden administration was taking.

In response to a question from Justice Sonya Sotomayor, Prelogar denied that, with regard to the states, the administration’s policies had any “effects on their own taxing or spending or regulating.” This is a nonsensical claim to anyone who has dealt with the multiple costs and problems that illegal immigration is causing in border states such as Texas, as well as other states.

As to the government’s argument that “shall” doesn’t really mean “shall,” Roberts asked Prelogar if it is really the high court’s job to determine whether, as she was urging, the law is impossible for the government to comply with. Echoing language from Marbury v. Madison (1803), Roberts said that the court’s job is “to say what the law is, not whether or not it can be possibly implemented or whether there are difficulties there.”

Continuing, Roberts asked, shouldn’t the court simply “say what we think the law is, even if we think ‘shall’ means ‘shall,’ and leave it up” to Congress and the executive “to sort that out?”

The solicitor general replied that, in fact, the court should take into account “considerations of resource constraints” when interpreting the “meaning of ‘shall.’”

One of the more astounding aspects of Prelogar’s argument was her assertion that the lower court didn’t have the authority to vacate the administration’s guidelines and that the judge was misinterpreting the Administrative Procedure Act, which governs issuance of government regulations and these types of policies. In fact, Prelogar claimed that the U.S. Court of Appeals for the District of Columbia Circuit—a court that gets these cases most often—has ignored the text, context, and history of the statute.

Kavanaugh, who served on the D.C. Circuit for 12 years, was clearly offended by that claim, pointing out that “the government has never made this argument in all the years of the APA [Administrative Procedure Act].”

Kavanaugh named some judges from that court, both liberal and conservative, who he said paid “a lot of attention” to the text, context, and history of the APA.

What Prelogar was arguing was a “pretty radical rewrite” of the law, Kavanaugh said. He said he found it “astonishing” that she would come before the court and argue that it should “just toss out decades of this court’s law.”

Roberts, who served on the D.C. Circuit for two years, agreed that this argument by the government was “very radical,” and joked that D.C. Circuit judges often threw out actions of federal agencies “five times before breakfast.”

The solicitor general’s claim even went too far for Justice Ketanji Brown Jackson, the Supreme Court’s newest—and probably most liberal—member as well as an alumnus of the D.C. Circuit. Jackson’s questions, however, showed she was clearly hostile to the claims being made by the states.

On the costs states claim they are incurring due to the Biden administration’s guidelines, Jackson asked Texas whether the state’s own policies toward illegal aliens caused Texas to incur costs due to its decision to “incarcerate or parole certain non-citizens if the federal government decides not to detain them.”

But the Texas solicitor general, Judd Stone, rebutted that claim.

Stone said Texas incurs costs “regardless of what it does, whether it detains, releases, or paroles individuals, because we have not only law enforcement costs but social services costs and very serious threats of recidivism.” This last was a reference to illegal aliens, released by the federal government, who repeatedly commit crimes in Texas.

Even if the Supreme Court upholds the lower court’s decision tossing out the guidelines issued by Mayorkas, as the solicitor general of Texas admitted, such a decision would not “coerce” the government into doing anything.

The state’s contention is that the Biden administration’s guidelines “are unlawfully causing DHS agents essentially … to treat mandatory things as discretion,” thus leading them to not detain criminal aliens as well as other aliens that U.S. law says they shall detain.

That said, given this administration’s utter failure to enforce the immigration laws as written, even if the Supreme Court upholds the lower court’s decision, it is highly likely that administration officials simply will honor the court’s ruling in the breach. And they will continue to allow hundreds of thousands of illegal aliens into the country every month.