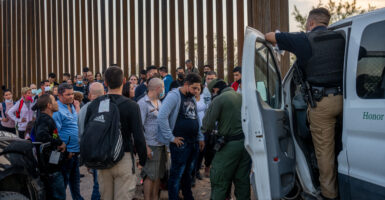 Hispanic voters say the U.S. government should do more to enforce immigration laws, according to new polling data.

An exit poll conducted by Rasmussen Reports and NumbersUSA found that more than half of Hispanics who voted in the 2022 midterm elections agree that the government isn’t doing enough to reduce illegal immigration.

The survey asked Hispanic voters if the government is doing “too much” or “too little” to “reduce illegal border crossings and visitor overstays.” Among the 515 respondents, 57% said “too little,” while just 16% said “too much,” 17% said “about right,” and 11% said they weren’t sure.

Specifically, even among Democratic Hispanic voters surveyed, 49% said they thought the government was doing “too little” to reduce illegal crossings at the border.

“Wanting a secure border and an orderly, fair migration process with some limits is like asking for safe streets and lower crime—a sensible and mainstream point of view,” Hankinson said. “Counting on Hispanic Americans as a permanent bloc vote against commonsense policies is a poor long-term strategy.”

However, the Brookings Institution’s Gabriel Sanchez said that 64% of Latinos reported “that they voted for a Democratic House candidate, compared to 33% who reported they voted for Republican candidates” in the 2022 midterms.

The Rasmussen Reports survey also asked Hispanic voters: In an effort to “control illegal immigration, how important is it to greatly increase the physical barriers, such as walls and fencing, on the U.S. border with Mexico?”

The poll found that 47% of Latino voters think that walls and fencing are “very important” to limit illegal immigration, and an additional 19% of Hispanic voters surveyed said walls and barriers are “somewhat important.”

When it comes to policies related to illegal migrants’ access to jobs in America, 56% of survey respondents said they “favor immigration policies that prevent illegal border crossings and illegal immigrants from getting jobs in the U.S.”

In addition to asking Latino voters their views on immigration policies, the survey also asked about their approval rating of the current president.