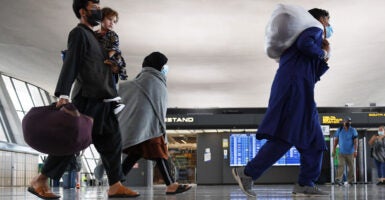 As inadequate as the Biden administration's security vetting is for Afghans seeking refuge in the U.S., it's better than the Border Patrol's vetting of the millions of illegal aliens crossing our southern border. Pictured: Afghan refugees arrive Aug. 27, 2021, at Dulles International Airport in Dulles, Virginia, after being evacuated from Kabul during the Taliban takeover of Afghanistan. (Photo: Olivier Douliery/AFP)/Getty Images)

Hannah Davis is a research assistant in the Border Security and Immigration Center at The Heritage Foundation.

The Biden administration has failed significantly in bringing Afghan evacuees into the country after the chaotic U.S. withdrawal from Afghanistan.

According to a new inspector general’s report from the Department of Homeland Security, the administration had no contingency plans to support emergency operations, no proper vetting procedures for refugees, and no standardized policies.

Because of this, the report concludes: “DHS may have admitted or paroled individuals into the United States who pose a risk to national security and the safety of local communities.”

President Joe Biden, who ironically refers to the processing of Afghan refugees as “Operation Allies Welcome,” likely allowed some of the nation’s enemies to infiltrate the U.S.

The lack of intelligence available about Afghan evacuees directly correlates with Biden’s removal of America’s presence from Afghanistan. The withdrawal of U.S. forces resulted in a power vacuum that quickly was filled by the Taliban.

Thousands of Afghans sought to flee their country and the U.S. immediately put them on planes and brought 79,000 of them, inadequately vetted, straight to the interior of our country. All of this was orchestrated, regardless of the fact that a lack of an American footprint in Afghanistan equates to a lack of intelligence and verification on the ground there.

Much like what happened in former President Barack Obama’s Syrian migrant fiasco, the Biden administration is cutting corners to “streamline” the vetting process in the same way.

Then-FBI Director James Comey, referring to Iraqis and Syrians accused of terrorism-related crimes making it into the U.S., said: “There’s no doubt that was the product of a less than excellent vetting.”

“If we don’t know much about somebody, there won’t be anything in our data,” Comey added. “I can’t sit here and offer anybody an absolute assurance that there’s no risk associated with this.”

As inadequate as the security vetting is for applicants seeking refuge, it is better than the vetting that Border Patrol agents are able to do with the millions of illegal aliens crossing our southern border. The influx of illegal migrants in the past 18 months has resulted in 81 individuals on the U.S. terrorism watchlist being encountered at the border.

In previous years, when border security actually was enforced, fewer than five encounters occurred with individuals on the terrorism watchlist.

“The sharp rise in apprehensions of the watchlisted individuals coincides with a significant rise in overall border encounters,” according to the Border Patrol.

Because the Biden administration has compromised border resources, the nation’s domestic security also is compromised. Reports suggest that nearly 1 million “got-aways” are roaming the country, unvetted, undocumented, and possibly dangerous.

According to Department of Homeland Security sources, that is over 55,000 “got-aways” every month.

Appallingly, White House press secretary Karine Jean-Pierre recently stated that illegal immigrants are not simply walking across the southern border, even though media footage tells another story. Border Patrol agents were quick to respond, asking: “How out of touch can this administration possibly be? Well, I guess this is a new level.”

Expressing disbelief, Sen. Ted Cruz, R-Texas, said of Jean-Pierre on his podcast: “There are two and only two possibilities … either she is deliberately ignorant—she has no idea what’s happening at the border—or she’s deliberately lying. There’s not a third possibility. It is one or the other.”

Cruz went on to invite Jean-Pierre and Biden to the southern border at any time of the day to witness rampant illegal crossings.

“You can pick any damn hour of the day you want,” the Texas Republican said.  “You can come at 2 in the morning, you can come at noon. You will see them coming because they are coming every single hour.”

Not long after, the White House press secretary clapped back, saying that she had been to the border before and didn’t need “lectures or invitations from Republicans about the border or border policy.”

Homeland Security Secretary Alejandro Mayorkas insists that the southern border is secure. On the record, he has stated this multiple times; each time, it has been a downright lie.

The fact that our southern border is open and unsecured is not and never should be a right versus left or conservative versus liberal issue. It is simply a fact.

Securing the border is a “historic challenge,” Mayorkas said. This was a rare moment of truth and transparency from the homeland security secretary.

In fact, Biden even disposed of Obama-era border policies, such as the routine removal of illegal aliens who pose national security threats and who obstructed immigration controls through visa fraud, identity fraud, and illegal reentry, or who didn’t leave when legally instructed to do so.

Because of the removal of sensible border policies, over 2 million encounters with illegal aliens have occurred at the border since fiscal year 2022 began Oct. 1, 2021. The year also saw over 20,000 searches and rescues, over 25,000 encounters with previously convicted criminal illegal aliens, over 400 pounds of fentanyl seized, over 600 apprehensions of known gang members, over 300 apprehensions of individuals on the terrorism watchlist, and over 3,000 weapons and ammunitions seizures.

The recidivism rate for illegal reentry is 27%, a higher rate than in the previous six years.

However shocking these statistics may be, Biden’s border crisis is much worse.  These statistics represent what is known. What is statistically unknown is the true amount of illegal aliens within the U.S. interior, the actual amount of life-threatening drugs smuggled into the U.S., how many gang- and terrorist-affiliated individuals are in the U.S., and just how high the recidivism reentry rate truly is.

When the southern border is as unsecured and porous as it is now, there is no possible way to gauge the actual number of illegal aliens within the U.S. at any time, nor is there a way to gauge crime associated with illegal aliens.

It needs to be noted that Biden’s self-made border crisis was never only his. It belongs to all American citizens. The onslaught of illegal immigration has drained public funds, raised taxes, and created more competition for jobs.

Legal immigration does the exact opposite; in fact, it allows for the flourishing of western society via a robust economy. That is why Biden’s open-border policies burden only those who are legally and rightfully citizens of the U.S. These policies also disincentivize individuals who were eager to enter America legally but decided not to, based on Biden’s message: The border is open, come as you wish, and we will take care of you.

Mayorkas, as homeland security secretary, has not upheld his oath to protect America from foreign enemies, nor has he defended the tenets of the Constitution or the laws of the U.S. He, along with others in the Biden administration, has done the complete opposite.

The purposeful dismantling of the concept of border security, coupled with direct assistance to illegal aliens from taxpayers and allowing unvetted Afghans into the country, proves one thing: Biden and Mayorkas have compromised the security of the U.S. and may be the biggest known threats to the homeland.