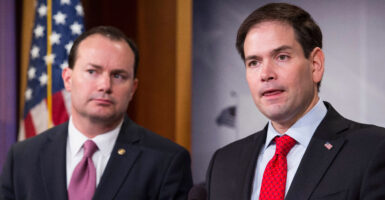 In just a couple of hours, the Senate is gearing up for a final vote on the misnamed “Respect for Marriage Act.” The vote is set to begin at 3:30 p.m. EST with the full Senate voting on the First Amendment Defense Act amendment from Sen. Mike Lee, R-Utah, and two other amendments from Sen. James Lankford, R-Okla., and Sen. Marco Rubio, R-Fla.

Afterward, a final vote on the Respect for Marriage Act will likely take place with a 60-vote threshold required for passage. The stakes are high, but it’s not too late for a final “push” of opposition to quash the bill.

Republicans have long been sounding the alarm that religious liberty is under attack in the United States. It seems that many people, especially in the infamous Gen Z category, have grown deaf to many of the religious liberty concerns latent in legal debates surrounding same-sex marriage, gender, and more.

Nonetheless, the import of today’s vote on the Respect for Marriage Act cannot be overstated. If the bill passes as it currently reads, the United States is looking at a fundamental shift in its religious liberty protections. This bill could impact not only how religious institutions function, but whether they’ll even be able to afford to do so.

The perfect example of this is the current bill text of the Respect for Marriage Act. With the amendment by Sens. Susan Collins, R-Maine, and Tammy Baldwin, R-Wis., the act seemingly provides protections for religious individuals and institutions who still believe that marriage is between one man and one woman.

The only problem? It doesn’t do that at all.

What would affirmative protections look like? In short, it would look like Lee’s First Amendment Defense Act amendment. Lee’s amendment does what the Collins-Baldwin amendment fails to do; namely, provide explicit protections for people of faith.

Lee’s amendment states that it “[e]nsures that the Federal Government shall not take any discriminatory action against a person, wholly or partially on the basis that such person believes, speaks, or acts in accordance with a sincerely held religious belief or moral conviction that marriage is or should be recognized as the union of one man and one woman.”

In short, if you believe that marriage is between one man and one woman, then you have the right to believe and act in accordance with those beliefs. Lee’s amendment explicitly protects the tax-exempt status of religious individuals and institutions, their eligibility for government contracts, grants, or accreditation, and licenses for adoption, foster care, or counseling services.

But, without Lee’s amendment, the Respect for Marriage Act would make same-sex marriage the de jure “law of the land” and make anti-discrimination cases against religious schools and nonprofits the norm.

These aren’t just ambiguous “religious” persons who would be affected. That would mean that a religious school or adoption agency that desires to act in accordance with its belief that marriage is between one man and one woman would be subject to losing its tax-exempt status or their license to operate.

Think about your local Catholic school or perhaps the faith-based adoption agency that works tirelessly to provide safe, lasting homes to children who have lost their parents. If the Respect for Marriage Act passes as it is currently written, then these cornerstones of your community will be subject to rigorous anti-discrimination lawsuits unless they comply with same-sex marriage.

While this bill does not provide any additional protections to those in same-sex unions, it does empower an ideologically motivated bureaucracy and activist regime with all the legal fodder necessary to attack people of faith. While Christians are used to the false claim that they are bigots, this bill would impact religious persons who hold to traditional marriage, including those of the Jewish or Muslim faiths, or Mormons of the Church of Jesus Christ of Latter-day Saints.

If these groups think that their places of worship and nonprofits will be exempt from anti-discrimination lawsuits and attacks on religious liberty, they are sorely mistaken. Unless they embrace the demands of same-sex marriage anti-discrimination requirements hook, line, and sinker, then they will be subject to the same concerns regarding tax exemption and licensure.

The risk this bill poses cannot be understated.

The big “so what?” is that without decisive action from Senate Republicans, many religious institutions will not be able to exist unless they change their sincerely held beliefs on the nature of marriage between one man and one woman.

Not only will religious institutions be subject to losing their tax-exempt status, grants, licensure, and more, they will likely not be able to continue to offer their services in the community.