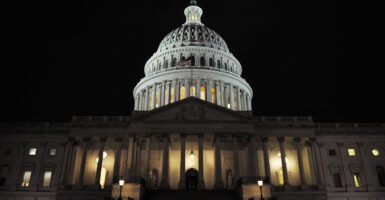 United States senators voted Monday on a motion to invoke cloture on an amendment to the so-called Respect for Marriage Act, advancing the legislation one step closer to passage. Pictured: The Capitol Oct. 1, 2008 (Photo: Mandel Ngan/AFP/Getty Images)

United States senators voted Monday on a motion to invoke cloture on an amendment to the so-called Respect for Marriage Act, advancing the legislation one step closer to passage.

Lee has repeatedly raised concerns about the contents of the Respect for Marriage Act, urging Democrats and Republicans to come to an agreement on his amendment creating a strict policy that the federal government can’t discriminate on either viewpoint of marriage, whether same-sex or traditional.