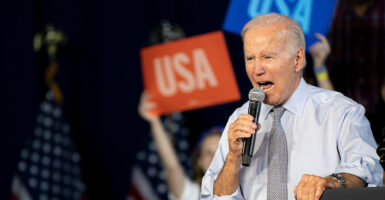 Woke attitudes are becoming pervasive among young people, even outside the United States.

Recently released research by Eric Kaufmann, a professor of politics at the University of London, shows how concepts such as critical race theory and radical gender ideology have become common concepts taught in U.K. schools.

The research was based on a YouGov survey of 1,500 U.K. residents ages 18 to 20. It reinforces the fact that radical ideas such as critical race theory are not just relegated to the United States.

And even Winston Churchill isn’t safe, that survey shows.

“A majority, 59%, of British school leavers say they have either been taught, or heard from an adult at school, about at least one of ‘white privilege’, ‘unconscious bias,’ and ‘systemic racism,’ three concepts associated with applied critical race theory,” the study found.

That number rises to 73% when the research included “critical social justice” approaches to gender, patriarchy, and the concept that there are many genders.

The study noted that CRT concepts are even more frequently picked up on social media, though Kaufmann said schools are reinforcing these concepts.

According to the research, left-wing cultural attitudes are most prevalent among Britain’s young “elite,” who are at or plan to attend universities.

In an UnHerd article explaining his findings, Kaufmann said schools aren’t just teaching critical race theory as a concept, they’re teaching it as fact: “68% of those taught these ideas said that they were either not taught competing perspectives, or that they were told that the alternative views on offer were not ‘respectable.’”

So this is more along the lines of indoctrination, not pedagogy.

Kaufmann also noted that these polls reflect other findings about young people in the United Kingdom. He noted a separate survey showed stark differences in attitudes toward free speech between the young and old, especially on the Left. The politics professor used the case of J.K. Rowling, author of the “Harry Potter” series, who has criticized the transgender movement.

“When asked whether J.K. Rowling should be dropped by her publisher, young people split evenly while the over-50s plumped 82-3 for Rowling. The biggest age gap is within the Left, between illiberal young leftists and their liberal older counterparts,” Kaufmann wrote.

It gets worse. From Kaufmann:

18-25s are evenly divided over whether Churchill’s statue should be removed from Parliament Square whereas those over 50 oppose it 83-6. Just 9% of 18- [to] 20-year-old women report a positive opinion of the wartime leader. When asked whether Britain is a racist country, the 18-25 group responded in the affirmative by a 61-39 margin compared to 35-65 against among the over-50s. Indeed, nearly 6 in 10 of these young people thought Britain was as or more racist than most countries.

Apparently, leading the fight against a genocidal Nazi Germany isn’t good enough for a huge number of penitent woke youths in the modern U.K.

What’s notable, and deeply disconcerting, about these polls is how similar woke attitudes have spread so quickly among young people in the West. This isn’t just a disease infecting American institutions.

At one time, the “West” generally meant “Western Christendom.” Despite often stark cultural differences between countries, countries within Western civilization shared a certain moral basis—even as they fought over borders and other details.

What we now have is a competing belief system that’s spread by academia and a globalized elite culture.

In just a short amount of time, fringe concepts such as critical race theory—once relegated to small corners of academia—became not only common but in some cases the dominant theories being taught and transmitted to young people.

The increasingly dominant ethos in the West among the young and elites in general has exacerbated the warped loathing of all things Westerners were once proud of—Winston Churchill, in the case of the U.K.—and combined it with an increasing inability to criticize anything outside the West.

Western business leaders seem to have particularly glommed onto this trait so that they may continue to contribute to progressive projects at home while making money in countries that practice brutal repression of their citizens, or simply modern slavery. Our new robber barons not only get rich thanks to Western laws and institutions, they now lecture us about our bigotry and backwardness while operating businesses in countries with concentration camps.

Zealotry for the cause, whether grounded in deep belief or not, is often tied to self-interest. To be a member of the elite in good standing, you must embrace these views or risk cancellation.

But this hypocrisy shouldn’t lead conservatives or centrists to think that the rising woke ideas aren’t deeply felt by many. For young Westerners—many of whom are detached from family, religion, community, and tradition—woke ideas provide a framework to live by.

As I wrote in my book “The War on History,” attacking and rewriting the past is how the far Left shapes the present and the future. The old pillars of the West and the United States—Christianity, liberty, self-government, and even democracy properly understood—are being uprooted, torn down, and ultimately replaced by the new faith.

That’s why the political battles over education and schools are so important.

Insiders, educrats, and union bosses won’t save us. They’ve only reinforced the mechanisms of indoctrination that have poisoned the minds of young people. But there are ways of fighting back.

Some governors are proactively preventing woke indoctrination in public schools. Parents are organizing to reshape local school boards and taking their children out of failing schools that won’t change.

Yes, many woke concepts will continue to get to young people through media and entertainment. That’s almost unavoidable at this point. But ceding our schools to fanatics exacerbates the problem and creates the perception that this is the only way to think about the world.

Preserving the free world, for ourselves and posterity, means that these battles over education are of the greatest importance.

There is no escaping the culture war or the diversity, equity, and inclusion regime. They are coming for you and your children here and throughout the Western world. If we fail, we will slip into a new dark age, as Churchill warned us a few generations ago.

The rot within goes deeper than ever before, but it will become total if we don’t draw lines in the sand now.