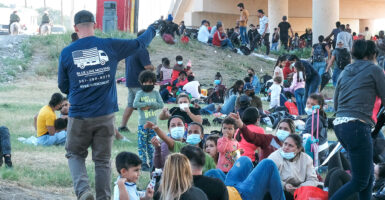 Chris Magnus was forced to resign as head of U.S. Customs and Border Protection on Nov. 12. He was unprepared for the job, never had the support of the workforce, and cared more about internal “social justice” than executing CBP’s mission. Not surprisingly, he utterly failed to secure the U.S. border in his tenure of almost a year.

Magnus ignored the advice of experienced professionals and abandoned successful policies that had reduced illegal migration to historic lows. Instead, he allowed his agents to be pulled off the border and aid his boss, Secretary of Homeland Security Alejandro Mayorkas, and the “Mayorkas Migration Machine” to process and parole well over a million mostly single illegal alien adults into the United States, despite few of them having any chance of qualifying for asylum.

Half or more of these illegal aliens, plus over a million unrecorded “gotaway” arrivals, plus others encountered at official ports of entry, are now living in the U.S., adding to insurmountable and growing administrative and court backlogs.

Meanwhile, Immigration and Customs Enforcement, hobbled by Mayorkas’ guidance not to deport illegal aliens, managed to expel only 59,000 in all of fiscal year 2021. That’s just a quarter of  the illegal immigrants that arrived this October alone, so, it’s not exactly keeping up with the flow.

How did Magnus last even 11 months in his job?

First, he was doing President Joe Biden and Mayorkas’ bidding. Incompetence in enforcement is a feature, not a bug, of their unspoken immigration policy.

Elected to be a safe centrist, Biden has instead been led by the nose on policy issues by the far Left of his party. On immigration, advocates of mass amnesties and open borders are running the show. The results have been exactly what they want: unlimited inflows of illegal aliens from all over the world under the pretense that they are all seeking asylum for political reasons, combined with no plan and zero intent to remove even those who, after due process, are ruled ineligible to remain in the U.S.

Second, Magnus is an example of the Peter Principle and its Pierre Corollary. Lawrence J. Peter’s “Peter Principle” proposed that people rise to the level of their incompetence—they get promoted into increasing positions of responsibility that require greater and greater skills until they are promoted beyond their abilities and can’t do their jobs. For example, a police chief like Magnus might handle a mid-size town like Richmond, California, or Tucson, Arizona, but will fail when promoted to manage a federal agency with over 60,000 employees charged with defending the nation’s borders.

The Pierre Corollary, named after White House spokesperson Karine Jean-Pierre, states that the more ticks you have on your intersectional bingo card, the more reluctant a woke employer will be to fire you. As an immigrant, lesbian woman of color, KJP has an impermeable four-point suit of armor against calls for her replacement by a spokesperson that could answer routine press questions without reading from a binder like it’s the Gospel.

Poor Magnus has only two ticks in his favor: He will usually be “the first openly gay” [insert his next job title here] and he’s a social justice warrior. That bought him some time in this latest job, but in the end, it wasn’t enough to save him from the axe.

If he wasn’t enforcing the law, what was Magnus doing? Apparently, his focus was on improving the internal culture of CBP and especially the Border Patrol.

For example, to placate advocates for illegal migrants, Magnus reorganized the Border Patrol’s internal investigation units. You see, the most important thing for border law enforcement is to be sensitive to their illegal alien, drug smuggler, and foreign criminal customers, even if they aren’t allowed to detain or deport any.

Magnus was reputed to nod off in meetings, which he blamed on his multiple sclerosis, not on boredom with the details of trying to enforce border and immigration laws. That might be true, but as with Sen.-elect John Fetterman, if there comes a point where poor health renders someone apparently incapable of doing an assigned job, it’s not “ableist” to point that out.

Instead of giving fashionable “unconscious bias” training to CBP staff and failing to defend Border Patrol agents from false accusations of whipping Haitian illegal aliens, Magnus could instead have advocated for them with Mayorkas and the White House. He could have worked with Mexico, Haiti, Cuba, and other countries to stem the flow of illegal migrants and establish safe refugee adjudication facilities outside our borders.

A review of Magnus’ tweets over several years shows that social activism was more important to him than law enforcement. In July 2020, when federal agents were called to protect the federal courthouse in Portland, Oregon, Magnus called it “an affront to constitutional, professional law enforcement.”

As a police chief, he consistently hyped the alleged mistreatment of detained migrants, downplayed the numbers coming in illegally, and expressed support for amnesties. When Magnus was police chief in Tucson, he placed the comfort of illegal alien residents ahead of federal enforcement of immigration laws. The local National Border Patrol Council chapter called him “an ultra-liberal social engineer” and had no confidence in his ability to control crime or enforce laws.

In short, Magnus was the kind of woke police chief that, combined with rogue prosecutors, no cash bail, and other progressive policies, has brought a fresh wave of high crime to residents of major cities like New York and Philadelphia.

All in all, Magnus’ resumé showed no sign of him being an obvious fit for promotion to supervise the nation’s front-line defense against terrorists, fentanyl, and plain old illegal immigrants.

He was reportedly sidelined by the Biden administration in interagency meetings on immigration with the White House and other Department of Homeland Security components. It would be charitable to suppose this was on the grounds of incompetence, but perhaps he was just unable to sell the lie that “the border is secure” as smoothly as Mayorkas.

One thing America should count on: Any replacement Biden chooses will hardly be any more inclined than Magnus was to protect the border and enforce the law.