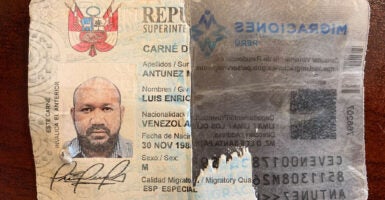 Luis Antunez’s ID card, found last week on the banks of the Rio Grande in Eagle Pass, Texas, while the author visited communities along the U.S.-Mexico border with Daily Signal reporter Virginia Allen. (Photo: Simon Hankinson for The Daily Signal)

EAGLE PASS, Texas—Meet Luis Antunez, your new neighbor from (probably) Venezuela. He’s a 40-year-old trader from Tucupita. Or a policeman from Puerto Carreno, or a criminal from Caracas. We may never know for sure.

I found Antunez’s ID card the week before last on the banks of the Rio Grande here in Eagle Pass while visiting border communities with Daily Signal reporter Virginia Allen and our guide, Frank Lopez Jr.

Antunez apparently chucked the identification after wading across the river into the U.S. as one of over 200,000 illegal immigrants who entered our country in September.

As you can see in the photos above and below, Antunez likely cut the ID card to obscure his last name and other details.

Why, you ask, would Antunez mutilate and ditch his own identification card?

Here’s a possible version of events, based on the limited facts we have.

Antunez probably left Venezuela some time in the past decade that Nicolas Maduro, socialist successor to Hugo Chavez, has been running the world’s most oil-rich country into the ground.

Antunez went to Peru, a nearby, safer country, where he obtained a residence card recognizing his temporary status. According to the U.S. Agency for International Development, he would have been one of 1.3 million Venezuelan refugees there.

A Likely Journey From Venezuela

Sometime this year, Antunez may have learned on the Venezuelan expatriate grapevine that the U.S. was letting in pretty much everyone who arrived at the southern border, with no requirements other than to promise to show up for some kind of immigration process later.

In the meantime, his friends told him, you can work, find housing, and live unmolested anywhere you want (except Martha’s Vineyard). So, Antunez left his safe third country and took his chances to come here, crossing through at least one other safe country (Mexico) on the way.

Antunez may have walked and taken buses from Peru all the way to Mexico and up to the border at Piedras Negras. More likely, he flew to Mexico City and took a bus the rest of the way.

The trip could have cost him a few thousand dollars in tickets and bribes. At the end, he likely paid a few hundred bucks to an alien smuggler who helped him and others get across the Rio Grande into the U.S.

Once on the riverbank in Eagle Pass, Antunez ditched his Peruvian refugee card. Soldiers of the Texas National Guard, detailed under Operation Lone Star, babysat his group until the U.S. Border Patrol arrived.

The Border Patrol told the illegal immigrants to ditch their wet clothes and most other items, which were thrown onto an existing trash mound of water bottles, clothes, food, and personal items dumped by previous migrants on private and public land. Piles of such detritus line the border and the banks of the Rio Grande.

Antunez and his group of illegal border crossers, mostly from South and Central America, were put on a white, unmarked bus (or van if the group was small) and taken by the Border Patrol to a giant tent-city compound locally, or elsewhere if that one was full.

At that migrant processing center, U.S. Customs and Border Protection agents took Antunez’s photo and wrote down the name and date of birth he told them, or which were on his original Venezuelan documents if he still had them.

This information may not have been the same as the details Antunez gave the Peruvians, and it may or may not have been true. U.S. officials neither have means nor time to verify any of it, unless the migrant was previously detained, arrested, or sought immigration status.

Antunez has no current address, of course, and no phone. Federal officers gave him five sheets of paper in English—one stamped “Paroled,” another telling him to “report to the nearest ICE [Immigration and Customs Enforcement] and office within 60 days or face removal.” This was a totally empty threat.

Other officials with the Department of Homeland Security, parent agency to both ICE and CBP, then took Antunez and hundreds of others picked up that day to a migrant shelter in San Antonio run by a nongovernmental organization, or NGO, assisted by various charities.

These centers receive millions of dollars in federal taxpayers’ money from the Federal Emergency Management Agency and other agencies, and their owners and managers are well paid.

Antunez got a bed and food and was told that he could stay three days. NGO workers asked him where he wanted to go and if he had relatives who could pay for the ticket.

Maybe Antunez went to Washington, D.C., like this group of fellow Venezuelans. Maybe he wanted to go to Florida but didn’t have anyone to pay, so the NGO bought him a plane ticket to Miami. Or maybe he had to wait out on the street until something turned up, like this former Venezuelan soldier.

Flight Out of San Antonio

Two days later, Antunez went to San Antonio International Airport with only the five pages from the Department of Homeland Security as identification.

He wore a mask (often around his chin) because the shelter told him to; he had not actually been vaccinated or tested for COVID-19.

With variations, something like this story is happening tens of thousands of times each month.

Just like Antunez, around 1,000 illegal immigrants a day are crossing from Mexico into the U.S. in the Del Rio sector alone, which covers 245 miles of border, including Eagle Pass.

In under two years, President Joe Biden’s administration has re-wired and inverted the entire U.S. immigration system. While the legal process for immigrant and visitor visas alike is backlogged at historic levels, we have well over a million illegal arrivals such as Antunez who have begun to live in the U.S. since January 2021, when Biden took office.

On top of that are about a million more “gotaways” who didn’t even give border officials putative biographic and actual biometric information. Exactly who they all are, and where they are now, no one would be able to tell you.

“The test of a first-rate intelligence is the ability to hold two opposed ideas in mind at the same time and still retain the ability to function,” American novelist and essayist F. Scott Fitzgerald famously wrote in 1936.

American adults can understand that millions of people in the world are in difficult circumstances, such as Antunez and the 5 million other Venezuelans who fled that country in the past decade, and at the same time realize that the United States cannot possibly take them all in. Hard choices have to be made and then enforced.

A functional U.S. refugee system exists, but that isn’t what the Biden administration is using for migrants coming from south of the border.

This Isn’t a Process

For now, legal, front-door, orderly immigration to the U.S.—including the refugee program—has been eclipsed by a massed rushing of the back gates encouraged and abetted by Biden’s homeland security secretary, Alejandro Mayorkas, and his Mayorkas Migration Machine.

All available Department of Homeland Security resources are going to the giant inward-sucking sound in the south. Deciding who enters the U.S. and gets to stay based on mere physical proximity—and not by due, legal process—allows foreigners to steam-roll over the laws that Americans, through Congress, have enacted.

Only a second-rate intelligence could imagine that we will be able to process the millions of migrants who have arrived illegally already since Biden took office, plus millions more on the way, while simultaneously handling over 10 million cases pending action in immigration courts or with U.S. Citizenship and Immigration Services.

White House press secretary Karine Jean-Pierre tells us: “We have had a process in place. There’s a legal way of doing this and—for managing migrants.”

But what we’re experiencing isn’t legal, and it’s not a process. It is chaos.