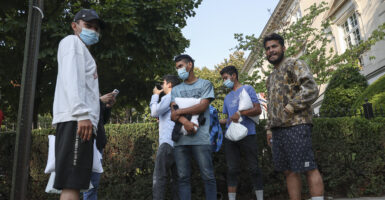 The Biden administration's failure to reach ambitious refugee targets results from a loss of control at the southern border. Pictured: These men are among 101 illegal immigrants waiting Thursday morning near the Washington residence of Vice President Kamala Harris after buses dispatched by Texas Gov. Greg Abbott dropped them off there. (Photo: Kevin Dietsch/Getty Images)

The Biden administration recently sent Congress a proposal to admit a total of 125,000 refugees in the fiscal year that begins next month.

The Biden administration would like to blame its failure to reach ambitious refugee targets on COVID-19 or the Trump administration rather than on the true cause: a wholesale loss of control at the southern border that has exacerbated massive backlogs in both the legal immigration system and the asylum process.

“Refugees” mostly are recommended to the U.S. by the United Nations High Commissioner for Refugees or other partners in foreign countries. Based on U.S. priorities, the State Department and other U.S. agencies interview applicants and screen them for criminal history and health issues. If they are approved as refugees, the government pays private organizations to transport them to the U.S. and integrate them into our society.

“Asylum,” on the other hand, is something that illegal immigrants ask for at the border or after already entering the U.S. without permission. Their claims are handled domestically by U.S. Citizenship and Immigration Services or the Justice Department’s immigration courts.

Imagine someone hosting a fancy party at his mansion. He lets the guests in at the front door, checking their tickets to confirm they were invited. Meanwhile, around the back, the kitchen staff is letting in 15 times as many people, with no tickets, no reliable identification, and no background checks.

Biden’s new target numbers for the Refugee Admissions Program are contained in a State Department document, “President’s Report to Congress on Proposed Refugee Admissions for Fiscal Year 2023.” The ceiling of 125,000 refugees proposed for the new fiscal year “would address the growing needs generated by humanitarian crises around the globe,” according to the report submitted to Congress on Sept. 9.

Compounding the morass at the border has been the Biden administration’s slapdash effort to admit nearly 80,000 Afghans following the panicked American evacuation from Afghanistan in August 2021.

This chart of U.S. refugee admissions shows that 125,000 would be ambitious even if the border disaster wasn’t sucking up all available resources, and if we weren’t expecting tens of thousands more Afghan refugees. The only times in the past 40 years that we’ve come anywhere close to the refugee cap was 1980 (the Mariel boatlift) and a couple of years in the 1990s.

The Obama administration tried shifting resources to refugee processing, but only at the cost of massively increasing delays in the cases of asylum-seekers. Resources to handle the border and subsequent immigration cases are finite: The government has to rob Peter to pay Paul—or more likely, delay an application by Pavel the Ukrainian overseas to admit Pedro the Venezuelan at the border.

For all its flaws, the Refugee Admissions Program is time-tested, organized, and methodical. In comparison, the Afghan and southern border streams are about as orderly as the U.S. evacuation from Saigon in 1975.

For the Afghans of Operation Allies Welcome, the vetting process administered by U.S. Customs and Border Protection was supposed to get at least a name and date of birth for each individual from some kind of identity document, plus biometric information (photo, fingerprints). If both revealed nothing derogatory in U.S. databases, the Afghan would get to fly here.

However, a recent report by the inspector general of the Department of Homeland Security, parent agency to Customs and Border Protection, found that “CBP admitted or paroled evacuees [from Afghanistan] who were not fully vetted into the United States” and who “may … pose a risk to national security.”

The inspector general’s report observed the obvious: The biographic information on these individuals was rudimentary, unreliable, and sometimes not collected at all.

Having processed tens of thousands of visas in Third World settings, I can vouch that even a full “vetting” is nowhere near definitive. In developing countries, few reliable records exist.

Even when applicants have locally issued identity documents, attempting to verify them takes time. Applicants often don’t know the date they were born, so they obtain affidavits—sworn statements “signed” with a thumbprint—from kindly but illiterate village elders to get the documents they need for U.S. immigration purposes.

Not surprisingly, the inspector general’s report found that more than 10,000 of the 79,000 Afghans were recorded as being born on Jan. 1. As they say in computing: Garbage in, garbage out.

Foreigners will generate “hits” in records controlled by U.S. agencies only if they are accurately recorded in those databases.

As for criminal history, visa applicants from undeveloped countries obtain a clearance certificate from a police station that usually has no database and no way to search nationally for records other than local paper files. Refugees often can’t procure even these worthless police clearances, especially from the country they fled.

What we’re left with is their word, and people who are desperate to flee a country tend to leave out the inconvenient details in their applications.

While the Afghan influx was going on, over 150,000 migrants have crossed the border illegally each month on average under the Biden administration, with well over a million of them released into the country after minimal processing.

The situation is so out of control that hundreds of illegal aliens recently were released in El Paso, Texas, due to lack of capacity to house them even for the brief time needed to obtain unreliable personal data and move them into the interior. With over 1,000 migrant arrivals per day, El Paso, one of America’s poorest cities, is considering paying for four buses a day to move the migrants out of town.

In addition, the 200,000 illegal immigrants now coming per month are the ones who actually want to get “arrested” at the border, so they get their free bus ticket to Sanctuary City and public benefits. An estimated additional 900,000 foreigners have entered utterly without inspection on Biden’s watch.

Those with reason to avoid detection, such as recidivist criminals, can cross the border undetected. Most just find a sector that is unpatrolled, thanks to Homeland Security Secretary Alejandro Mayorkas’ prioritizing social work in a migrant processing facility.

But check out these images of creative types wearing camouflage and scaling a section of border wall with barbed wire. Did they maybe have something to hide?

According to the Immigration and Nationality Act, a refugee is a person outside his country “who is unable or unwilling to return” due to a “persecution or a well-founded fear of persecution on account of race, religion, nationality, membership of a particular social group or political opinion.”

Under the Biden administration, every migrant arrival is assumed to be an asylum-seeker, even when that is patently ludicrous, and processed accordingly. The administration is abandoning use of the Title 42 public health measure and the “Remain in Mexico” policy, the only inconvenient obstacles.

As we are seeing, this approach encourages many more arrivals from all over the world, rampant asylum fraud, hopeless backlogs in immigration courts and at U.S. Citizenship and Immigration Services, and a perpetual dysfunction that open-borders advocates can exploit to claim that a “broken system” needs “reform.”

The U.S. never can bring in enough refugees to solve the world’s problems. If we’re going to show preference to any population, it should be refugees, who are selected and securely processed overseas. The illegal aliens crossing the border by the thousands every day, supposedly to claim asylum, present risks of which we are unaware. And these migrants will be difficult to expel whatever the outcome of their cases.

The Refugee Admissions Program is intended to show good will and encourage other countries to do the same. For this to work, we need to bring in a reasonable number of refugees per year who can be properly, if not perfectly, screened and assimilated.

To hit his own ambitious targets, Biden would have to end the insanity at our southern border.