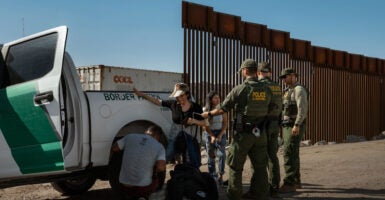 Illegal immigrants are processed by the U.S. Border Patrol after crossing the border from Mexico into Yuma, Arizona, on Aug. 19. Easing the public charge rule, as the Biden administration is seeking to do, will only further incentivize illegal immigration. (Photo: Qian Weizhong/VCG/ Getty Images)

In its latest effort to “remove barriers” to immigration, the Department of Homeland Security is finalizing the long-awaited public charge rule, codifying a weak standard that upends congressional intent, decades of precedent, and the core American value of self-reliance.

The term “public charge” first appeared in statute in 1882, when Congress barred the admission of “any person unable to take care of himself or herself without becoming a public charge.”

More than 100 years later, Congress issued a statement of national policy on self-sufficiency and immigration when it enacted the Personal Responsibility and Work Opportunity Reconciliation Act of 1996. The statement confirmed that aliens within the United States should not be reliant on public resources, lest those public benefits become an incentive for immigration.

For more than 30 years, temporary guidance governed our understanding and administration of the public charge doctrine. This narrow interpretation was merely a placeholder for final regulations. When the only meaningful reforms were made to the doctrine during the Trump administration, liberal activist courts invalidated the rules to gut this commonsense requirement.

The Biden administration has seized on that to issue a weak rule that undermines Congress’ intent on the Personal Responsibility and Work Opportunity Reconciliation Act. Under its new rule, only the receipt of cash benefits or long-term institutional care could trigger a public charge finding.

The rule ignores the myriad medical, housing, educational, and other public benefits routinely doled out by federal, state, local, and tribal agencies. And, more importantly, it ignores the tremendous cost of those benefits to the government and to the American taxpayer.

Congress unambiguously expected that aliens would not rely on public benefits. It thought that self-sufficiency was a cornerstone of the American experience, and that anything to the contrary would encourage immigration that depresses our economy and drains our public coffers.

The Biden administration’s proposed rule flies in the face of the envisioned merit-based immigration system found in the Personal Responsibility and Work Opportunity Reconciliation Act, as the vast majority of public benefits are excluded from any consideration.

The proposed Biden rule erroneously claims that aliens have long shied away from public benefits, but the truth is that public charge determinations have never been fully utilized as Congress intended. Examples of immigration benefits being denied because the alien or the alien’s family partook of a public benefit are almost nonexistent.

In fact, most cases where there is a specter of reliance on public welfare are cured by form affidavits filed by a friend or relative promising to support the alien.  Those legally enforceable contracts are ignored by the government, which almost never pursues an action against those relatives when an alien receives a public benefit paid for by citizen taxpayers.

True to form, this new rule provides no additional mechanism to provide any degree of real enforcement either. For the Biden administration, enforcement is anathema to its ongoing efforts to “break down barriers in the immigration system” and open our borders to unlimited immigration.

As the Department of Homeland Security rests on its laurels and claims it’s not penalizing aliens and is engaged in creating a system that is “fair and humane” and is “[c]onsistent with America’s bedrock values,” it is actually penalizing and financially burdening states, localities, and taxpayers.

With the public charge doctrine whittled down to be virtually nonexistent, the disincentive to use the programs by aliens eventually seeking green cards is gone, and what remains is akin to an unfunded mandate.

As state attorneys general should be huddling on litigation strategy to stop this new rule from being implemented, state legislatures must also act. Placing limits and restrictions on public benefits for illegal and legal aliens and setting strict eligibility conditions would stave off some of the burden.

Congress must legislate to counteract the complacency within our immigration system and the burdens on our public welfare systems that a public charge doctrine devoid of merit provides. Statutory definitions alongside unambiguous agency mandates are the only remaining avenues to ensure compliance.

The Department of Homeland Security is continually abusing the rule-making process to implement the administration’s open-borders agenda at any cost. This latest move comes on the heels of other legally dubious moves in the Deferred Action for Childhood Arrivals and asylum contexts.

As the administrative state and the unaccountable federal bureaucracy does not respect statutory law or congressional intent, it’s imperative that states ensure that the courts rein in the clear abuse of a bloated and unchecked executive branch.