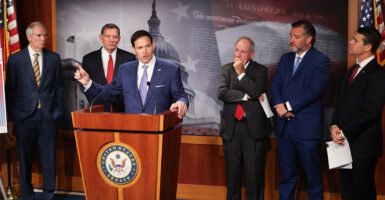 The report, “Biden’s Border Crisis: Examining Policies that Encourage Illegal Migration,” concludes that “the illegal migration crisis at the U.S. southern border has worsened under President [Joe] Biden and is the result of a variety of domestic and foreign policy factors.”

The 56-page report cites several areas of concern, such as increasing levels of illegal immigration over the southern border, Obama and Biden administration policies that have incentivized illegal immigration, and the fostering of transnational criminal organizations through unmonitored sections of the U.S. border.

The report also cites the failure of Mexico, Honduras, El Salvador, and Guatemala to enforce their own border security and to mitigate transnational crime.

“This is a crisis in America today. Transnational criminal organizations are also capitalizing on the weak U.S. and regional enforcement of border security and immigration controls, and evolving their human smuggling and trafficking tactics. Over 6,000 migrants were victims of kidnapping and related abuses since last January,” Risch said, adding:

Violent criminals and deadly fentanyl are making their way across the border. Over 16,000 criminals have been arrested at the border since the beginning of last year, for crimes that include homicide, assault, sex crimes, robbery, and trafficking.

The safety of U.S. citizens is at risk. This can’t continue, and this can’t be ignored.

“[The southern border crisis] is a national security crisis, a humanitarian crisis, and a crime crisis,” Barrasso agreed.

Rubio contended, contrary to what the left claims, that illegal migration through the southern border is neither safe nor humane.

“There’s nothing compassionate about luring people into a trip where rapists and murderers and the worst human beings on the planet get their clutches into them and abuse them, their children, women traveling alone,” the Florida lawmaker said. “It’s a horrifying experience.”

Not only does transnational organized crime affect those making the journey to America via the southern border, the senators argued, but it directly affects American citizens through increased violence, human trafficking, and an upsurge of illegal drugs such as fentanyl, which alone caused more than 71,000 deaths last year.

Additionally, the senators noted that unmonitored and unsecured portions of the southern border present a prime opportunity for potential terrorists to enter the U.S. unbeknownst to authorities, citing the 50 illegal migrants apprehended this year near the border who appeared on the FBI’s terrorist watchlist.

All of the senators called upon Biden to address the crisis at the border and reevaluate his administration’s harmful policies and apathetic attitude toward illegal immigration.

“It’s time for the president to go to the southern border and see the chaos that he has created and explain to the American people why he’s done it, and what he’s going to do about it,” Barrasso said.

“We have here serious legislators who are telling the administration that we have to see a change in policy in order to stop what is a totally out-of-control border,” Portman added. “It is a full-blown crisis.”

Cruz contrasted the White House’s priorities with the urgency of the illegal immigration crisis.

“Joe Biden has been president for a year and a half, but he hasn’t been to the border once,” he said. “He has time to answer questions about his favorite flavor of ice cream. The Biden White House has time to write speeches at something called a ‘Latinx’ conference where they very kindly called Latinos ‘tacos.’”

Cruz blasted the Biden administration for its poor treatment of border security officials, most recently seen in Biden’s criticism of the Border Patrol agents falsely accused of whipping migrants crossing the southern border in September. The Department of Homeland Security investigation proved these claims were false, but Biden has failed to issue an apology or retraction of his statements about the agents. The Texas senator called the incident a “cynical, cruel, vicious lie for which the president never responded.”

Cruz left for the Rio Grande Valley on Thursday with GOP Sens. John Cornyn of Texas, James Lankford of Oklahoma, Joni Ernst of Iowa, Ron Johnson of Wisconsin, and Barrasso to examine the U.S.-Mexico border and receive briefings from Customs and Border Protection and local law enforcement officials.

“Joe Biden seems to be much more willing to go and attack the hardworking members of the Border Patrol, who are out there trying to do their job and protect the border and protect this nation, than he is willing to do his own job of providing the security for this nation at the time of this southern invasion,” Barrasso added.

The senators criticized what they said is the political motivation behind the Biden administration’s encouragement of illegal immigration.

“Joe Biden and [Vice President] Kamala Harris and the Democrats do not give a damn. They created this [crisis]. They could stop it tomorrow, and they don’t want to,” Cruz said, adding:

They believe open borders are good for Democrats politically. Every illegal alien they see, they view as a future Democrat voter, and if people have to die, so be it.

“We have an administration that doesn’t care about enforcing the law. Their base—their activists and supporters—supports open borders,” Rubio said. “They’ll never say it, because it doesn’t poll well, but they think the borders should be open, and anyone who wants to come across should. There’s no country in the world that would tolerate that, and we shouldn’t either.”

Cruz condemned the “crime and disease and suffering and misery caused by Joe Biden’s open borders” and demanded that the president witness the effects of his policies.

“Joe Biden needs to get down to the border and see it firsthand,” the Texas lawmaker said. “This is cruel. It is immoral, and it is causing absolute chaos and human suffering.”

Although they are calling on the president to take action, the senators said that they are determined to address the border crisis to the best of their ability and ask Americans to demand that their leaders do the same.

Risch and Portman introduced the Solving the Border Crisis Act on Wednesday, which would extend Title 42, the emergency public health order that turned away migrants from the southern border due to the COVID-19 pandemic; resume border wall construction; and return asylum-seeking migrants to their home countries while awaiting immigration court hearings.

“We need to turn our concern as citizens into action,” Young said. “I’m persuaded this administration is not going to do anything about this national security situation, this humanitarian situation, until we make it hurt. So, I’m asking the citizens across the country to mobilize, to make this a first-priority issue. I am persuaded this is the only way we can get the administration to move on this issue.”