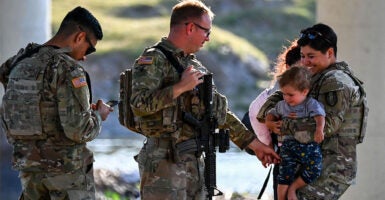 In September 2021, many people, including prominent Democrats and activists, mistook Border Patrol’s reins for whips and alleged the agents were whipping Haitian migrants. Pictured: US Border Patrol and National Guard troops play with a migrant child on June 30 in Eagle Pass, Texas. (Photo: Chandan Khanna/Getty Images)

U.S. Customs and Border Protection found that Border Patrol agents who many mistook to be “whipping” Haitian migrants at the border never whipped anyone, according to CBP Commissioner Chris Magnus.

The September 2021 “whipping” incident took place in Del Rio, Texas, when Border Patrol agent on horseback attempted to push back dozens of Haitian migrants at the U.S.-Mexico border. Several agents were seen using their horses’ reins to maneuver around the migrants and push them back.

Many commentators, including prominent Democrats and activists, mistook the reins for whips and alleged the agents were whipping the Haitian migrants.

“Whips are not part of Border Patrol training or equipment,” Magnus said, adding that CBP found no evidence Border Patrol agents struck any migrants, either intentionally or on accident, with their reins.

However, CBP did find that the Border Patrol unit involved in the incident “twirled” their reins in violation of CBP guidance, according to Magnus.

One agent was found to have used harsh language toward migrants, and several agents were found to have acted improperly when herding the migrants toward the Rio Grande river. Magnus declined to discuss specifics of the discipline to be handed down to the agents.

Magnus went on to call the actions of the agents “unprofessional and deeply offensive” despite finding they did not whip any migrants.

The findings are the conclusion of a nearly year-long investigation by the Department of Homeland Security into the incident. DHS Secretary Alejandro Mayorkas and President Joe Biden both condemned the agents involved.

The Daily Caller News Foundation previously reported at least one agent had been charged with “unsafe conduct” and poor judgment” for their actions.

“You knew or should have known that using your horse to block a noncitizen from exiting the water at the boat ramp created an unsafe situation, particularly for the noncitizen, but also for you and your horse,” the charges read.

The administration already declined to levy criminal charges against the agents following an investigation into their conduct.