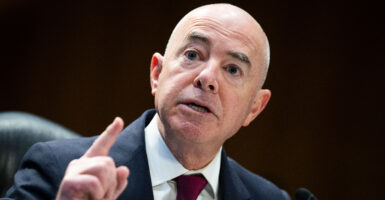 Homeland Security Secretary Alejandro Mayorkas—seen here testifying before a Senate subcommittee May 4—is engaging in gaslighting when he claims in the face of evidence to the contrary that the previous administration handed him “a broken and dismantled immigration system.” (Photo: Tom Williams/CQ-Roll Call Inc./Getty Images)

As May 23 neared, when border agents’ Title 42 public health authority to quickly expel illegal aliens was due to expire, U.S. Customs and Border Protection already had seen predicted increased numbers of illegal aliens.

Even the Biden administration admitted that “migration levels will increase.”

Homeland Security Secretary Alejandro Mayorkas issued a 20-page memo April 26 detailing his agency’s plan for coping with the expected surge of illegal immigration after the lifting of Title 42.

Title 42 authority has been used more than 2 million times since March 2020 to expel illegal entrants at the border, in a process much quicker than the normal Title 8 process.

Unfortunately for America, Mayorkas’ six-pillar “Plan for Southwest Border Security and Preparedness” is a continuation of the Biden administration’s approach to those illegally crossing the border; namely, quickly process them into the U.S., release them under parole, and grant them asylum.

The plan is lightly sweetened with optimistic, underfunded measures to mitigate the collateral damage on local communities. For example, DHS’ Southwest Border Coordination Center and Customs and Border Protection leaders would engage in regular coordination, which “includes a focus on noncitizen transport and capacity planning, resolving logistical challenges, and addressing community concerns through shared solutions.”

In the very first lines of his plan, Mayorkas gaslights Americans by blaming the previous administration for handing DHS “a broken and dismantled immigration system,” but still claims credit for managing “an unprecedented number of [illegal aliens] seeking to enter the United States” and higher numbers of drug and smuggling interdictions.

None of those is grounds for asylum, yet the administration’s plan is for all those illegally crossing our border to be able to seek asylum, in most cases under fraudulent pretexts, then expecting to be released into the interior.

The plan’s first pillar is a small increase in Customs and Border Protection staff and enlarged or new facilities to increase its capacity to hold aliens up to 18,000 at a time, from 13,000 currently. DHS has also doubled its ability to transport illegal aliens, mostly by bus, away from processing centers once they have been given paperwork to pursue asylum.

This is the essence of the plan: Get the illegal entrants out of detention and into the asylum pipeline as fast as possible, all to avoid media scrutiny and political outrage.

The first joint center was scheduled to go online April 29 in Laredo, Texas, and more are planned. Nongovernmental organizations will be present to provide legal orientation services and “onward transportation” for the vast majority of the illegal aliens who will be released into the country.

In Pillar 3, Mayorkas disingenuously promises “consequences for unlawful entry, including removal, detention, and prosecution,” and that “[c]ore to this plan is our commitment to continue to strictly enforce our immigration laws.”

In reality, he has already issued multiple memos to prohibit most ICE arrests, detentions, and prosecutions.

Mayorkas is also well aware that immigration court cases take years due to the 1.7 million-case backlog and an abusive number of continuances, motions, and appeals—all of which buy illegal aliens more time in the U.S. and make their ultimate removal increasingly unlikely.

When immigration judges do issue final orders of removal, Mayorkas has prohibited ICE from detaining and removing such aliens, so they will remain in the U.S.

Pillar 4 reveals the growing administration reliance on nongovernmental organizations to perform government functions and provides a mere glimpse into the money going to these groups.

Mayorkas’ plan states that these groups will “receive” illegal aliens, who will be released directly into the community and provide them with “onward travel” out of sight and mind. The DHS offers $150 million in taxpayer-funded Federal Emergency Management Agency grants to nongovernmental organizations “to help alleviate” the population and fiscal “pressures” that communities experience from “increased migration levels.”

States should note this admission when they sue the Biden administration for the expenses they incur due to its refusal to secure the border or enforce immigration laws.

The Biden administration is thus both rewarding its ideologically aligned nongovernmental organizations and attempting to buy off community leaders to accept the illegal aliens the administration is encouraging and processing into this country.

Pillar 5 targets “transnational criminal organizations and smugglers who take advantage of and profit from vulnerable migrants and who seek to traffic drugs into our country.”

The Biden administration’s open-border policies have caused the smuggling of humans and drugs to thrive, and yet Mayorkas has the audacity to pat himself on the back for increased drug and smuggling arrests.

What would really disrupt the cartels would be preventing illegal immigration in the first place and cutting off their revenue source.

This plan will only further enrich the cartels and smugglers, kill more Americans with more drugs and crime, and endanger more migrants.

Pillar 6 is a pie-in-the-sky search for a magical deal with Latin American countries that will somehow stem flows of illegal migration with causes far beyond the control of foreign governments.

Mayorkas touts recently struck deals with Panama and Costa Rica, but the deals have few practical applications yet.

He boasts of “close cooperation with Mexico,” but the illegal immigration numbers are increasing, not decreasing. As the memo states, “In the past three weeks, [Customs and Border Protection] has encountered an average of over 7,800 migrants per day across the Southwest Border … compared to a historical average of 1,600 per day in the pre-pandemic years (2014-2019).”

Pillar 6 contains the forlorn hope that sending a counter-message through media and diplomacy that “the termination of the Title 42 public health order does not mean that the U.S. border is open” will fool anyone.

In short, Mayorkas’ “Plan for Southwest Border Security and Preparedness” is a 20-page, six-pillar delusion.

There’s nothing safe, orderly, or humane about the border currently. As a result, neither our national security nor our public safety is protected.

Mayorkas concludes that DHS has been “able to manage increased encounters because of prudent planning and execution.” Yet, privately, he has told his agents that the border numbers are unsustainable.

The bottom line is this: Mayorkas’ public statements cannot be taken seriously, and his policies have put Americans in daily danger.

Editor’s note: This article has been updated with new developments since initial publication.