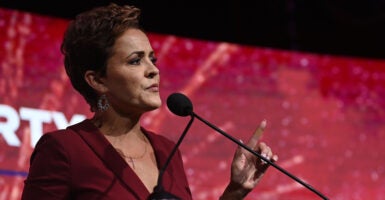 For the second consecutive election cycle, Arizona's Maricopa County is in the national spotlight for problems during and after the voting.  Pictured: Kari Lake, Republican candidate for Arizona governor, speaks during a GOP election night event in Scottsdale, Arizona. (Photo: Joshua Lott/The Washington Post/Getty Images)

On Election Day, Cathi Herrod received calls and emails about problems in Arizona’s Maricopa County about voting machines not accepting ballots, ballot tabulators being broken, and other questions regarding paper ballots.

“Voters are skittish in Maricopa County about election integrity,” Herrod, president of the Center for Arizona Policy, a conservative think tank, told The Daily Signal in a phone interview Thursday. “People wonder why it is that Florida is so quick to count votes and it takes Arizona days.”

For the second consecutive election cycle, Maricopa County is in the national spotlight for problems during and after the voting.

In 2020, Joe Biden’s victory in the county helped him to win a narrow victory over Donald Trump for the state’s 11 Electoral College votes.

Both contests are too close to call with about 600,000 ballots still not processed statewide, about 340,000 of those in Maricopa County.

Maricopa, which encompasses Phoenix, is Arizona’s largest and most populous county and the fourth-largest county in the United States.

J. Christian Adams, president of the Public Interest Legal Foundation, an elections watchdog group, was in the county Thursday, having traveled there to give a scheduled speech.

“Part of it is just the size,” Adams told The Daily Signal in a phone interview. “Maricopa County is geographically one of the largest voting jurisdictions in the country. It is gigantic. And a push for mail-in voting just makes it more complicated with delays and glitches.”

Here’s a look at the big problems in Maricopa County’s administration of elections.

1. What Are the Tabulation Machine Issues?

Voters were asked to drop their ballot in “Door 3,” a drop box, to be counted later.

“Some voters didn’t trust Door 3, and that’s why they voted on Election Day,” George Khalaf, president of Data Orbital and managing partner at the Resolute Group, a Phoenix political consulting firm, told The Daily Signal in a phone interview.

Maricopa County officials said printing problems prevented voting machines from reading about 17,000 ballots—or 7% of all those cast for the 2022 election.

“We understand that for the people who went through it, this was frustrating, inconvenient, and not how they pictured Election Day. We plan to get to the bottom of it,” Gates and Board Vice Chairman Clint Hickman said in a prepared statement. They added:

The printer settings for the Ballot-on-Demand printers at vote centers were the same ones we used in the August primary. The paper was the same thickness. Prior to the general election, the Elections Department test-printed and test-tabulated hundreds of ballots without issues.

The Maricopa County officials did not respond to phone and email inquiries from The Daily Signal for this report.

But during a press conference Thursday, Gates said the situation is no different from previous years, but more noticeable when election contests are closer. Gates said he anticipated that 99% of the ballots would be counted by Friday.

He said that “no county or state is done with counting right now.”

The problems should be temporary and all votes should be counted, Public Interest Legal Foundation’s Adams said.

“Tabulators were just spitting out ballots and that can be fixed,” Adams said. “Think of a Coca-Cola machine after you put in a crinkled-up dollar bill.”

“It is a mystery why tabulation machines worked a week before Election Day in a test and then didn’t work at 60 voting centers on Election Day,” Herrod said in the phone interview.

2. What Happens With Mail-In Ballots?

About 8 in 10 Arizona voters cast their ballots earlier than Election Day, either in person or through mail-in voting, according to The Associated Press.

This situation can lead to a lengthy process, as voters’ signatures are checked against registration records to ensure they didn’t already vote through other means. Before attempting to put a ballot through a tabulator, election workers are supposed to physically smooth it out.

Of Maricopa County’s 400,000 uncounted ballots, about 290,000 were mail-in ballots dropped off Tuesday at voting sites. That drop-off number broke the previous record by 70%, Gates told reporters at the Thursday press conference.

“Why is it taking the amount of time it is taking? A lot of people are talking about this,” Gates said. “It’s very standard. This is how things work in Arizona and have for decades. This is due in part to mail-in voting.”

As for the comparison with Florida’s relatively quick count, Gates seemed to take exception.

Election Day problems in the county were real but small compared to those with mail-in ballots, Adams added.

“Elections are complicated, and not making them more complicated is one way to avoid these problems,” he said. “Mail-in voting added steps to the process.”

3. What About Litigation Before Election?

In early October, the Republican National Committee and other GOP-aligned organizations sued Maricopa County after county officials refused to share the partisan makeup of poll workers.

That litigation resulted in the county’s sharing the information, and hiring more Republican election workers.

After the Arizona state Senate authorized a forensic audit of Maricopa’s 2020 ballot counting, county officials acted indigent. Among them were Gates and another Republican official, county Recorder Steve Richer.

The controversial audit, completed in 2021, found problems with the county’s procedures but reaffirmed Biden’s victory there over Trump.

Still, a lot of eyes were on the county, Data Orbital’s Khalaf said in the interview.

“This election needed to go off without a hitch,” Khalaf told The Daily Signal. “This is a Maricopa County thing, not an Arizona thing. All of the other Arizona counties did fine. We need changes to the law to ensure this scenario doesn’t keep happening.”

Though affirming Biden’s 2020 win in the county, the 2021 state Senate audit found:

Objections to the audit were based on hiring Florida-based cybersecurity firm Cyber Ninjas to conduct the review, because the company had little experience with elections, critics contended.