Dr. Oz Lost Pennsylvania by Putting His Head ‘in the Sand’ on Abortion: Pro-Life Leader 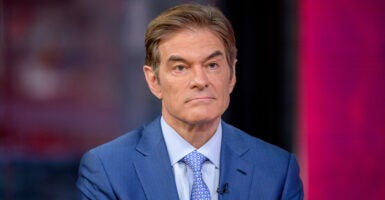 Mehmet Oz’s failure to capture a Pennsylvania Senate seat is due, in part, to his refusal to position on abortion in a “mature, deliberative, and principled manner,” a major pro-life leader said on Wednesday.

Susan B. Anthony Pro-Life America President Marjorie Dannenfelser applauded those candidates who aggressively defined their own stances on abortion, explained their opponents’ extreme stances, and then exploited the contrast between the two.

“Works every time,” she said.

“Candidates who conversely adopt the ostrich strategy, which is putting their head in the sand and hoping the reality goes away, or the possum strategy, which is to pretend dead and hope nobody notices your body is lying there, they lose,” Dannenfelser added. “And I think that our candidate in Pennsylvania is an example.”

The United States Supreme Court overturned Roe v. Wade during the election cycle of candidates like Oz—who lost because he “hoped that the issue would go away” rather than facing it head on, according to Dannenfelser.

Dannenfelser said that Oz, who conceded the race Wednesday morning, took political advice from leadership in Washington, D.C., which reportedly urged Oz and fellow candidates to pretend the abortion issue did not exist and avoid the topic as much as possible.

“There should not be involvement from the federal government in how states decide their abortion decisions,” Oz said in late October, when asked whether there should be a federal ban on abortion. “As a physician, I’ve been in the room when there’s some difficult conversations happening. I don’t want the federal government involved with that, at all.”

Oz repeatedly stuck with this doctor reference throughout the election cycle, questioned by conservative and liberal media alike on his abortion record (his past comments indicated that he supported abortions, though he insisted that he was pro-life).

But he didn’t go much further than that.

“Define who you are, define who they are, exploit that contrast, it works every time,” Dannenfelser insisted. “But instead they engaged in what is really political malpractice and that is to advise the ostrich or the possum strategy or all sorts of other analogies which lead to a dysfunctional political environment, one in which those contrasts can’t be made. And the positive contrast can’t be leveraged into marginal wins at polls.”

“We win when we take a position that is popular and clear and confident, and we contrast that position with our opponents,” Dannenfelser explained. “And in this environment, that is a contrast that wins because our popular position over and over contrasts well with 100% abortion up until the end, paid for by taxpayers.”

“Those are very important highlights because they have been so high profile and there’ll be a lot of analysis of why they landed where they have,” she added. “Brian Kemp signed the heartbeat law, won by 8%. Mike DeWine signed a heartbeat law, won by 26%. Greg Abbott signed the same, which was a trigger law complete with protections, and won by nearly 12%. Ron DeSantis signed a pain capable law at 15 weeks and won by nearly 20%.”

“This basic political rule works,” she insisted: “find your position, contrast with your opponent, and make sure that gets communicated over and over again.”