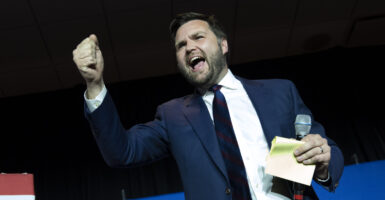 “The two US Senate candidates that stood out the most this cycle are J.D. Vance and Blake Masters,” Schilling told The Daily Signal on Tuesday evening. “And the reason is simple—they focused their campaigns on working families and told voters that they had a simple goal: restore the American family to greatness. And with God’s help, they will.”

Ryan, who sought to portray himself as a unifying moderate focused on the needs of Ohio’s working-class families, has twice voted for the Women’s Health Protection Act. That legislation specifically states that the right to abortion “shall not be limited or otherwise infringed.” It would have allowed abortion providers to determine whether a pregnancy is considered “viable” or not, effectively enabling abortions at any point.

Video footage obtained by The Daily Wire this summer exposed Ryan admitting that he was avoiding discussing “culture wars” on the campaign trail because these issues “don’t serve us very well in Ohio.”

“You want culture wars? I’m not your guy. You want a fighter for Ohio? I’m all in,” he said in one of his first TV ads during the general election.

“We’re keeping the message very much around economics,” Ryan said during a virtual March Zoom meeting with the Cuyahoga Democratic Women’s Caucus. “You know, staying away from the culture wars, which don’t serve us very well in Ohio.”

A woman on the call asked him: “You keep mentioning that you’re not about the culture wars and you know you’re talking about these bread-and-butter issues for people. But as a young woman of reproductive age, as someone who identifies as queer and who has a lot of friends in the queer community, I just want to make sure, like, will you be the advocate that we need on abortion rights, the advocate that we need on trans people’s human dignity and their human rights and on gay rights?”

Ryan reminded the woman that he gave a floor speech in support of the Women’s Health Protection Act before voting for the legislation.