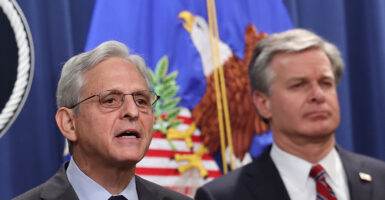 Republican staff at the House Judiciary Committee released a report Friday detailing the claims of “a multitude of whistleblowers” at the Federal Bureau of Investigation, who alleged that the FBI is abusing its law enforcement authority to prosecute political opponents, artificially inflate the amount of “hate” in the country, and removing from its ranks staff who refuse to parrot the leftist agenda.

“Under the malevolent leadership of [Attorney General] Merrick Garland,” the report charges, “the FBI and Justice Department has been a willing participant of the Biden Administration’s weaponization of law enforcement.”

“President [Joe] Biden has shown no problem in labeling his political opponents as racists, fascists, and domestic terrorists,” the report states. “The FBI under Director [Christopher] Wray has been willing to exert its law enforcement tools in a manner guided by political calculations. Whistleblowers allege that the FBI is manipulating data about domestic violent extremism to support the Biden Administration’s political agenda.”

The report cites whistleblowers and other reports, claiming that “the FBI prioritizes investigations and uses differing tactics based on political considerations—using aggressive tactics against political opponents of the Biden Administration while going softer on, or outright ignoring, allegations against the Administration’s political allies.”

According to the report, whistleblowers have described the FBI’s Washington, D.C., leadership as “rotted at its core,” with a “systemic culture of unaccountability,” and full of “rampant corruption, manipulation, and abuse.”

In response to a request for comment, the FBI sent this statement:

The FBI has testified to Congress and responded to letters from legislators on numerous occasions to provide an accurate accounting of how we do our work. The men and women of the FBI devote themselves to protecting the American people from terrorism, violent crime, cyber threats and other dangers. Put quite simply: we follow the facts without regard for politics.  While outside opinions and criticism often come with the job, we will continue to follow the facts wherever they lead, do things by the book, and speak through our work.

The Republican report claims the FBI is “artificially inflating statistics about domestic violent extremism” by pressuring agents to report irrelevant incidents as violent extremism and by categorizing Jan. 6th-related investigations as separate cases, not as related to one single incident.

Republican staff claim the FBI is abusing its counterterrorism authority to investigate parents who spoke out at school board meetings. According to the report, whistleblowers explained that, after the National School Boards Association urged Biden to investigate concerned parents, the FBI opened investigations into one mother who told a school board “we are coming for you” and one dad because he “rails against the government” and “has a lot of guns.”

The report blames the FBI for protecting Hunter Biden, despite multiple reports about his lucrative foreign business dealings while his father, Joe Biden, was vice president. The report cites Meta CEO Mark Zuckerberg, who admitted that Facebook took “meaningful” steps to censor articles about Hunter Biden’s laptop following an FBI warning. This example highlights the FBI’s collaboration with Facebook and other social media platforms, which the report describes as the bureau’s “helping Big Tech to censor Americans’ political speech.”

The FBI also allowed attacks on pro-life pregnancy centers and other facilities to go on unabated while prosecuting pro-life protesters, the report adds.

The report also faults the FBI for using its authority under the Foreign Intelligence Surveillance Act to spy on American citizens, including those associated with Donald Trump’s 2016 campaign. While these incidents have been exhaustively reported, the report adds that “there is little indication the FBI has changed—or is willing to change—course.”

Whistleblowers also claimed that the FBI is culling staff who “dissent from its woke, leftist agenda,” according to the report. The bureau is seeking to “purge” FBI employees holding conservative views, they said. The report even claims the FBI took retaliatory action against at least one whistleblower who spoke out.

Several whistleblowers claimed that the FBI is taking steps toward firing employees who engaged in protected First Amendment activity on Jan. 6, 2021, according to the report. The bureau has suspended the security clearances of these staff and questioned their “Allegiance to the United States.”

“Multiple whistleblowers have disclosed how the FBI leadership is conducting a ‘purge’ of FBI employees holding conservative views,” the report states.

Finally, the Republican report faults the FBI’s “political meddling” for “dragging the criminal side [of the bureau] down,” pulling resources away from more relevant enforcement duties. One whistleblower said he was “told that child sexual abuse material investigations were no longer an FBI priority and should be referred to local law enforcement agencies.” The Republican staff call this “misprioritization” both a “dereliction of duty” and “a grave disservice to the victims of crimes that do not advance the FBI’s political agenda.”

Rep. Jim Jordan, R-Ohio, ranking member of the House Judiciary Committee, shared a page from the report, encouraging FBI staff to come forward and saying that they have a “right to speak with Congress.”

The DOJ did not respond to The Daily Signal‘s request for comment by publication time.