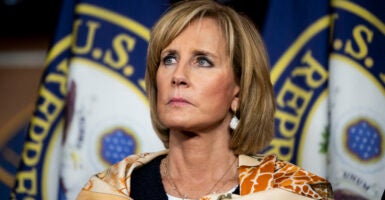 Rep. Claudia Tenney, R-N.Y., is calling on the Small Business Administration to explain why it forgave $67 million in Paycheck Protection Program loans to Planned Parenthood affiliates—loans that these abortion clinics should never have gotten in the first place.

In a letter first obtained by The Daily Signal, Tenney and her Republican colleagues told Inspector General Hannibal “Mike” Ware that the Small Business Administration “decided to forgive” 38 Paycheck Protection Program loans given “in violation of the guidelines set by Congress” to Planned Parenthood affiliates.

Those loans totaled at about $67 million, the letter said.

“Then perplexingly, your office found in its September 2022 report that Planned Parenthood affiliates are not actually affiliates of Planned Parenthood Federation of American (PPFA),” Tenney continued. “In response, we ask you to clarify how you came to this conclusion and explain to Congress how, despite PPFA’s clear methods of exerting control on their member organizations, these organizations do not qualify as affiliates.”

Over the past few years, Tenney’s fellow Republicans have repeatedly accused Planned Parenthood of illegally receiving those loans and called on the Small Business Administration to investigate how and why the abortion giant was given coronavirus aid.

“Planned Parenthood affiliates abide by corporate guidelines, follow affiliation mandates, and must be certified before becoming an affiliate,” Tenney told The Daily Signal. “Clearly, then, they are an integral part of the Planned Parenthood Federation of America and do not meet the size restrictions for the Paycheck Protection Program, which was intended to keep smaller businesses and organizations afloat during the darkest days of the pandemic, not create a slush fund for our nation’s largest and most politically connected abortion provider.”

“Republicans in Congress are committed to government accountability, and I will continue fighting to ensure strong oversight over how taxpayer dollars are spent,” she added.

“The purpose of this restriction was to ensure PPP aid only went to smaller companies and organizations that were truly independent of larger national companies,” the congresswoman explained. “These smaller businesses and organizations have historically had much more difficulty in receiving financing and absorbing shocks. The provision also prevented larger companies from organizing themselves as a network of affiliates in order to access these limited funds.”

“Considering PPFA affiliation can result in considerable funds and support for the affiliate, the powers held by the PPFA are an effective way for the central office to control its affiliates,” Tenney wrote. “This should have disqualified PPFA affiliates from receiving PPP loans and having them forgiven. These PPFA affiliates are not members of a trade association but a component of the largest abortion provider in the United States.”

The congresswoman called for an explanation as to “how these methods of PPFA control over its affiliates do not disqualify PPFA affiliates from the PPP.”

“Through incorrectly awarding loans to Planned Parenthood affiliates, the SBA used up limited funds that could have gone to the many truly independent small businesses, which did not have their applications approved before the program concluded,” she added.

In a statement to The Daily Signal, Rep. Chris Smith, R-N.J., said the $67 million in taxpayer funds funneled to Planned Parenthood through the Paycheck Protection Program is “an outright and egregious violation of the law.”

“The Paycheck Protection Program was intended to help small businesses struggling from COVID-19 restrictions—not enlarge the pockets of big abortion corporation Planned Parenthood, which has killed over 9 million innocent children since 1973 and reported more than $1.4 billion in affiliate revenue in a single year during the pandemic,” Smith said. “The Biden Administration must answer for this clear disregard for the law and be held accountable for this misuse of American taxpayer dollars.”