Arkansas’ Save Adolescents From Experimentation Act Is About Protecting Minors, Experts Say 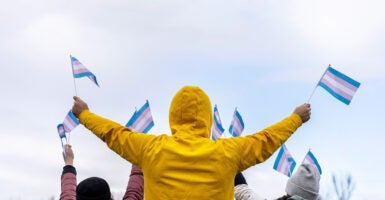 Families of transgender-identifying youth and doctors offering gender-reassignment treatment testified in federal court in October against Arkansas’ Save Adolescents From Experimentation Act. Backers of the temporarily enjoined law will get their turn next. (Photo: Vladimir Vladimirov/Getty Images)

The battle over “gender transitions” for minors is playing out in dozens of American states. Some states are seeking to ban cross-sex hormones and transgender surgeries. California Gov. Gavin Newsom, meanwhile, hopes to make his state a “magnet” for minors seeking those interventions.

Arkansas state Rep. Robin Lundstrum, a Republican, introduced the Save Adolescents From Experimentation Act in February 2021. The SAFE Act became state law in April of that year after legislators overrode a veto from Arkansas Gov. Asa Hutchinson, also a Republican. Hutchinson described the SAFE Act as a “vast government overreach” by the Arkansas General Assembly, arguing that it would add “legislative interference” between doctors and parents.

“One thing that needs to be emphasized is that the Arkansas SAFE Act and bills like it do not preclude the decisions of adults,” Quena Gonzalez, senior director of government affairs at the Family Research Council, told The Daily Signal. “This is about minors.”

The Arkansas law prohibits transgender procedures for minors, but does not criminalize them. Instead, it creates strong legal remedies for victims who later decide to sue.

The bill states that Arkansas has a “compelling government interest in protecting the health and safety of its citizens, especially vulnerable children.” It adds: “Only a small percentage of the American population experiences distress at identifying with their biological sex.”

The Arkansas law reflects a concern that “gender affirming” interventions may be short-circuiting the natural resolution of most teen gender dysphoria.

“At least 11 studies demonstrate that prior to society-wide transgender propaganda, the vast majority of children with transgender belief went on to embrace their bodies and genetic sex by young adulthood,” Dr. Michelle Cretella, former executive director of the American College of Pediatricians, told The Daily Signal. “This proves that the use of puberty blockers, cross-sex hormones, and mutilating surgeries are not required for trans-believing youth to live as the transgender activists claim.”

Before the SAFE Act could take effect as scheduled on July 28, 2021, U.S. District Judge Jay Moody temporarily enjoined the law at the request of the American Civil Liberties Union. The group filed a lawsuit on behalf of four families of transgender-identifying youth and two doctors.

In August of this year, a three-judge panel of the 8th U.S. Circuit Court of Appeals upheld Moody’s preliminary injunction.

Moody, an appointee of President Barack Obama, is now presiding over a two-part trial to determine the fate of the SAFE Act. The families of trans-identifying youth and doctors testified against it in the first week of the trials, which began Oct. 17. The second part of the trial is set to take place in November.

One psychiatrist, Dr. Dan Karasic, who testified against the SAFE Act, claimed that a patient’s mental health worsens if he or she is prevented for any reason from receiving sex-reassignment treatments. According to Karasic, that can include an increase in suicidal ideation or substance abuse, as one Centers for Disease Control and Prevention report claims.

Dr. Michele Hutchison, former medical director of the Gender Spectrum Clinic at Arkansas Children’s Hospital, also testified before the court in the October hearings. Hutchison has previously testified against the SAFE Act.

“Just as this bill passed the House, these kids heard about it,” she said in the Arkansas General Assembly last year. “I’ve had multiple kids in the emergency room because of an attempted suicide just in the last week.”

Hutchison—no relation to the governor—said a number of children called her saying they would kill themselves if the SAFE Act became law. “I guarantee … if this bill passes, children will die,” she argued.

One parent with a trans-identifying 17-year-old said in her testimony: “As a parent, I never imagined I’d have to fight for my daughter to be able to receive medically necessary health care her doctor says she needs, and we know she needs.”

Youth with transgender belief are at no greater risk of attempting suicide than any other high-risk group of young people. For example, a report out of the U.K. found that transgender belief increases youth suicide risk by a factor of 13, which is on par with other mental illnesses, like depression and anorexia nervosa.

Dr. Jennifer Bauwens, director of the Center for Family Studies at the Family Research Council and a trauma-focused clinician, told The Daily Signal: “From my perspective, being in the psychological field and being in the research realm in that field, I look at this body of work and I’m flabbergasted.”

“When we look at suicide … in the psychological field, just in general,” she said, “nobody’s making that claim that we know that if you have this particular condition that it’s going to lead to someone committing suicide.”

“We have risk factors,” Bauwens added. “We know if somebody’s depressed, … abused, or has experienced a traumatic event … that might indicate that they’re more likely to commit suicide.”

But it’s not conclusive, she said: “There’s nothing in the psychological field that gives this kind of causal connection.”

Remarking on her time working for a suicide-prevention hotline, Bauwens said it’s medical malpractice for a clinician or medical practitioner to say, “If you do not transition, you will commit suicide.”

The Family Research Council’s Gonzalez addressed the claim that sex-reassignment treatments are a necessary medical procedure.

“I can see how people would feel immense relief at the hope and the prospect that they’re entering something that will be a ‘new normal,’” he told The Daily Signal. “I think the evidence … is that this ‘new normal’ is a mirage and will not last.”

Arkansas Attorney General Leslie Rutledge said in a prepared statement on the SAFE Act trial that puberty blockers and cross-sex hormones are experimental and permanent.

“The [Food and Drug Administration] has never approved the use of puberty blockers and cross-sex hormones to halt a child’s normal, biological development,” she wrote.

Rutledge explained: “This is about protecting children. Nothing about this law prohibits someone after the age of 18 from making this decision. What we’re doing in Arkansas is protecting children from life-altering, permanent decisions.”

Cretella, commenting on so-called puberty blockers, told The Daily Signal that package inserts for Lupron, the leading puberty blocker in America, and for cross-sex hormones “warn that these drugs cause emotional lability, worsening of psychiatric disease, or new-onset mental illness.”

“Puberty is not a disease,” she said.

Even temporary use of puberty blockers can cause permanent harm, because normal developmental time is forever lost!

Studies show that youth on blockers lose normal bone density (they will have osteoporosis in their [20s] rather than well over age 50), do not undergo normal brain development, and miss out on normal psychosocial milestones.

Gonzalez cited the disclosure forms some gender clinics have posted on their websites. They warn that “medicine does not know, and science does not know, the effect of a lifetime of administering estrogen or testosterone in levels to cross-sex hormones.”

These are levels of “wrong-sex hormones, never found in the natural population,” he explained. “These are grave experiments that we’re running on kids.”

Karasic, Hutchison, and the ACLU did not respond to The Daily Signal’s request for further comment by publication time.

Editor’s note: This article has been corrected to reflect that a number of organizations also crafted the SAFE Act policy, along with FRC.