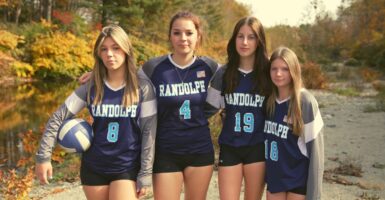 Our Daily Signal team traveled up the coast this week to the town of Randolph in northeastern Vermont, just in time to catch the last few days of the town’s beautiful fall foliage. We wanted to meet these girls, cheerful young ladies who chatted with us over pancakes and coffee. They shared their stories and anxieties from the past few weeks of tension and acknowledged the risks of publicly addressing such a controversial topic.

It’s an issue that not many parents expect their 14-year-old daughters to grapple with, much less address publicly: a biologically male student identifying as a transgender girl, playing on the girls’ volleyball team, and using their locker room.

But in this Vermont school district, school officials cite state law allowing for students to use locker rooms and bathrooms that align with their stated gender identity. These officials say that they care about everyone’s safety and that Randolph Union High School is investigating whether harassment took place when the girls told their biologically male classmate not to come into their locker room while they were changing.

During a well-attended Tuesday evening forum with parents, school Superintendent Layne Millington claimed that coverage of the girls’ pushback has sparked hatred and bigotry toward both the trans-identifying student and the school district. And other parents and students criticized Blake and her family for speaking up on the matter.

Parents who spoke with The Daily Signal said the superintendent and the forum did not focus on the most pressing matter at hand: their daughters’ discomfort at having a biologically male student in the locker room able to observe them while they are changing.

Early on a foggy Wednesday morning, we met up with some of these young ladies at the local bowling alley-turned-diner. Nervous to speak out, but determined to speak her truth, each girl sat down, mic’d up, and offered her own explanation as to why she believes her voice is not being respected.

These girls tell us they bear no ill will toward the trans-identifying student—they just don’t believe a biological male should be in their locker room and they can’t understand why school officials seemingly don’t care about their feelings and their discomfort.

“A male was in our locker room when volleyball girls were trying to get changed,” said Blake. “And after I asked him to leave, he didn’t, and later looked over at girls with their shirts off. And it made many people uncomfortable and feel violated. And I left as soon as I could in a panic.”

“It’s not fully the trans student’s fault,” she added. “It is much more the school board’s fault and they’re failing everyone. Not just the volleyball team, not the transgender student. They did nothing to help this situation. They still aren’t. They just want people to be in trouble and they’re not trying to help make a change.”

A female member of the volleyball team who identified herself as Lilly claimed at Tuesday evening’s forum that none of the girls in the locker room were changing when the trans-identifying student entered the room. Kayla, one of the volleyball players who sat down with us, says that’s simply not true.

“So why would someone say that they weren’t?” I asked her.

“I feel like everyone’s just trying to twist the story on us and make us look like the bad people in this situation,” the high school student said.

The trans-identifying student’s guardian, Melissa Sivvy, has insisted to The Daily Signal that her child is a girl, deserves to use the girls’ locker room, and never behaved inappropriately.

Offered a chance to respond to this story, the child’s guardian asked The Daily Signal to explain what “biologically male” means and what the girls meant by saying that they were uncomfortable having her child in their space while they were changing.

“Your child is biologically male, correct?” I asked Sivvy on Wednesday evening.

She responded: “Do you think adults should be thinking about what is under children’s clothing? Seems a little inappropriate to me.”

Parents we spoke with told us that they are outraged that the school district and the high school would allow such an incident to even occur—they don’t want biological boys in their daughters’ locker rooms, and they are bewildered as to why the school system is apparently prioritizing the needs of students who identify as transgender over their daughters. They also strongly pushed back against allegations that speaking up is hateful.

“I want all kids, all kids at RUHS to feel safe, all kids nationwide to feel safe in their spaces where they need to change or are supposed to be private spaces,” Blake’s mother, Jessica Allen, told us. “We have to get creative as a nation to really figure out how to keep everybody safe, and everyone working together. The hate really does need to stop, because that’s not what this is about…let’s have an open dialogue about how to keep everybody safe and feeling comfortable, because we’ve taught children to protect their bodies.”

“I feel it’s not the place for them,” added Eric Messier, Kayla’s father. “My daughter feels uncomfortable … while that other student’s in the locker room.

“All that matters is she’s uncomfortable. It’s pretty simple,” he added, describing his daughter and her friends as “tough, resilient young girls.”

“They need to make a change and make everybody comfortable.”

School officials keep pointing to Vermont state law on the matter, Jessica Allen noted.  “But the law, as it reads, has some room for creativity,” she said. “So let’s get creative and let’s make that happen so everyone does feel safe.”

Blake tells us that she is not only failing to get support from the school—she’s also facing punishment. Emails viewed by The Daily Signal show that school officials are investigating her for “harassing someone based on their gender” and have launched an investigation into this allegation following a “Hazing, Harassment, and Bullying” process.

School officials would not comment specifically on these allegations against Blake. Co-Principal Lisa Floyd told The Daily Signal: “Student safety is our District’s highest priority. We always do our best to maintain a supportive learning environment for all of our students.”

“The District has policies and procedures to respond to student harassment based on protected characteristics or other misconduct,” she added. “We are not able to discuss any specific students because of federal privacy laws. However, when we become aware that there has been a violation of our policies, including harassment of other students, we respond immediately. Where the policies and expectations are violated, we take disciplinary action consistent with the law and reasonably calculated to prevent further misconduct. We also do our best to give victims supportive measures.”

Blake says she does not regret speaking out.

“I’m glad I spoke out because there’s still so much that could be done, that the law could be changed, because now it’s national news,” she told me. When it comes to the trans-identifying student, “He had the right to go in, but once we said we were uncomfortable, he should have just left. It should have been that simple.”

“I don’t want other girls to have to feel uncomfortable about it,” the high school student added. “I think everyone should be able to just get changed in a locker room that they were born as. If you were born a girl, you can go in the girls’ locker room, get out when you’re done. It should be simple and it’s not anymore.”

Kayla said she’s heard a lot of people saying that school officials are treating the trans-identifying student as if that student has more rights than the girls.

“That’s a good way to put it,” she said. “They care more about that one single student than the rest of the girls. So they’re telling us all to go get changed in the single stalls instead of the locker room. And the trans person can have the locker room while all of us go into different places.”

“I feel like the team’s really brave about doing this because we all knew what was going to happen if we did, the consequences. If one of us were to get a scholarship, they could find this on the internet and take it away,” she added. “And so there’s many consequences to doing it, but I think it’s really important that we’re doing it.”

“Is it hatred and bigotry to say that you don’t want a biological male in your bathroom or locker room?” I asked most of the girls.

“No,” says Blake’s mother. “It’s about their comfort and their feelings.”

“It’s also a fact,” adds Grace, “because they are a biological male and it’s not hatred. It’s just we want to feel comfortable.”

“Talk about women’s rights,” the student added, “we should have the right to go to the bathroom without a male in our bathroom.”