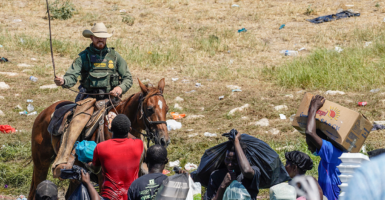 "The Biden administration has demeaned and degraded our brave Border Patrol agents," Rep. Elise Stefanik says. Pictured: A Border Patrol agent on horseback tries to stop illegal aliens from Haiti from entering an encampment on the banks of the Rio Grande in Del Rio, Texas, on Sept. 19, 2021. (Photo: Paul Ratje/AFP/Getty Images)

“The Biden administration has demeaned and degraded our brave Border Patrol agents. I proudly represent many Border Patrol agents and their families in my district whose lives have been uprooted because of Joe Biden and House Democrats’ open border policies, and I am outraged by these new revelations,” Rep. Elise Stefanik, R-N.Y., told The Daily Signal in an email.

Stefanik, the No. 3 House Republican, added:

Unfortunately, the media is all too eager to act as the Democrats’ stenographers instead of looking at the facts. When Republicans earn back the House this November, we will hold Homeland Security Secretary Mayorkas and anyone else in the Biden administration accountable for the slanderous lies they launched against our brave Border Patrol agents.

Marsha Espinosa, the assistant secretary for public affairs for the Department of Homeland Security, emailed Mayorkas on Sept. 24, 2021, alerting him that a photographer who took widely distributed photos of the incident five days earlier said Border Patrol agents did not “whip” illegal immigrants from Haiti as they entered the U.S. at Del Rio, Texas, Fox News reported Wednesday.

The Heritage Foundation’s Oversight Project obtained the Espinosa email to Mayorkas and other documents through a Freedom of Information Act request, or FOIA. (The Daily Signal is Heritage’s multimedia news organization.)

Espinosa emailed Mayorkas, her top boss, after President Joe Biden commented the morning of Sept. 24, 2021, five days after the incident, which the president described as “people being strapped.”

The department’s top public relations official sent the email to Mayorkas about two and a half hours before a White House press briefing where Mayorkas condemned the Border Patrol agents’ depicted actions, Fox News reported.

“The photographer behind images depicting Border Patrol agents or horseback told [El Paso TV station] KTSM things are not exactly what they seem when it comes to the photos,” Espinosa said in her email to Mayorkas at 12:05 p.m. that day.

“The photographs, which were taken Sunday [Sept. 19], appear to show agents on horses with a whip in hand. The photos caused outrage because from certain angles, it appears to show Border Patrol whipping migrants,” Espinosa emailed the homeland security secretary, “but photographer Paul Ratje said he and his colleagues never saw agents whipping anyone.”

Mayorkas spoke about the incident at a White House press briefing around 2:30 p.m., after receiving the email from Espinosa. He did not mention her email in his remarks to reporters, however.

“First of all, the images, as I expressed earlier—the images horrified us in terms of what they suggest and what they conjure up, in terms of not only our nation’s history, but, unfortunately, the fact that that page of history has not been turned entirely. And that means that there is much work to do, and we are very focused on doing it,” Mayorkas told reporters during the press briefing.

“But I will not prejudge the facts. I do not, in any way, want to impair the integrity of the investigative process. We have investigators who are looking at it independently. They will draw their conclusions according to their standard operating procedures, and then the results of that investigation will be dete- —will be determined by the facts that are adduced,” Mayorkas said.

As The Daily Signal reported, after vowing to investigate the incident and punish those responsible, the Biden administration released a 500-page report earlier this year showing that Border Patrol agents did not in fact “whip” Haitian migrants.

“Secretary Alejandro Mayorkas must be impeached; he should have been impeached long before this for a host of reasons,” Rep. Chip Roy, R-Texas, told The Daily Signal on Wednesday.

“I laid out the case for impeachment [of Mayorkas] last spring, and this latest revelation demonstrates a total disregard for his duty and those he is entrusted to lead,” Roy added.

If only he had an ounce of the courage [of U.S. Customs and Border Protection that] he purports to lead. He should be impeached.

Rep. Yvette Herrell, R-N.M., slammed Mayorkas on Twitter for throwing Border Patrol agents “under the bus to look good for his media friends,” and called on the homeland security secretary to resign.

“Mayorkas was presented with the opportunity to do the right thing on multiple occasions, yet he made the wrong decision at every turn. He deliberately chose to obfuscate the whole truth,” Rep. Ralph Norman, R-S.C., told The Daily Signal in an email.

Norman called on Mayorkas to resign or face impeachment in addition to apologizing to the Border Patrol agents.

Roman Jankowski, senior investigative counsel for the Oversight Project at The Heritage Foundation, told The Daily Signal in an email:

The Heritage Foundation’s Oversight Project knew from the beginning that Secretary Mayorkas was throwing these CBP agents under the bus for political reasons. We wanted to ensure that the truth came out about our brave Border Patrol agents, so we filed a FOIA request regarding this event.

Unfortunately, DHS was slow-rolling their response to our request, so we were forced to sue them in federal court. This email and others like it should be used to impeach Secretary Mayorkas. Our goal is to expose the Biden administration’s woke and progressive policies and we are just getting started.