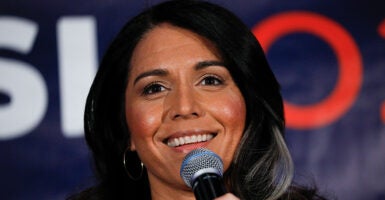 Former Hawaii Rep. Tulsi Gabbard announced that she is leaving the Democratic Party over its authoritarianism and anti-white racism in a Tuesday video.

“I can no longer remain in today’s Democratic Party that is now under the complete control of an elitist cabal of warmongers driven by cowardly wokeness, who divide us by racializing every issue and stoking anti-white racism, who actively work to undermine our God-given freedoms that are enshrined in our Constitution,” says Gabbard in the first episode of her new YouTube channel, The Tulsi Gabbard Show.

“This party is led by warmongers who are firmly in the grips of the military-industrial complex,” Gabbard says. She charges that Democrats have led us to the brink of nuclear war, which is “the most urgent existential threat we face.”

Gabbard, who ran for president as a Democrat in 2020, notes, “I didn’t win that election, so I don’t have the power to do what’s necessary to prevent it.”

“I’m calling on every one of you to stand up to these cowardly politicians,” she declares, adding that this may be Americans’ last chance to do so.

Today’s Democratic Party has been “weaponizing the security state and federal law enforcement for their own partisan, political ends,” Gabbard continues. In doing so, Democrats have undermined democracy and the rule of law.

She slammed them for advocating defunding of the police and for enacting laws that prioritize criminals over ordinary Americans. “Is it any surprise that crime and murder rates are rapidly increasing?” she remarks.

Gabbard comments on the Department of Justice’s recent arrest of 11 pro-life activists for blocking an abortion clinic entrance. “They didn’t use physical force, they weren’t dangerous,” she says. But seven of these activists are facing 11 years in prison and fines up to $250,000 if they are convicted, she notes.

“The Biden [Department of Justice] and Department of Homeland Security are using their newly formed domestic terror unit to target parents who are vocally standing in opposition to radical curriculums and explicit sexual content being taught to their kids in schools,” she adds.

Gabbard laments that President Joe Biden campaigned on unity in the 2020 presidential elections, yet he recently gave a speech claiming his political opponents are domestic terrorists and extremists. “That’s half the country,” says Gabbard.

She also notes that the Biden administration did nothing when protesters gathered outside the homes of Supreme Court justices following the leak of the Supreme Court’s decision in Dobbs v. Jackson Women’s Health Organization. While these protests were in clear violation of federal law, it’s nonviolent, pro-life activists who have been targeted by Biden’s Department of Justice, she argues.

“When the party in power does not believe in the rule of law, but they’re responsible for writing and enforcing laws, our democracy is doomed.”

Nor do Democratic Party leaders believe in freedom of speech, religion, and the right to bear arms, Gabbard continues. “They try to censor speech they don’t like, labeling it as misinformation and hate speech.”

Democrats are “working hand-in-glove with corporate, for-profit media and Big Tech to smear and silence political opponents and anyone who dares to challenge their authority,” she says.

Gabbard notes the Biden administration’s recent attempt to create a “ministry of truth,” which would control information Americans read and share online. Democrats’ objective is to “determine what is misinformation, what is true and what is not,” says Gabbard. “Their ideology is one of hate and divisiveness, rather than respect and love.”

Today’s Democrats are also hostile to people of faith, she adds. During the 2020 Democratic National Convention, Democrats chose to omit “under God” from the Pledge of Allegiance. “Freedom of religion does not mean freedom from religion.”

Americans should be free to practice religion without fear of reprisal or punishment, Gabbard argues. “Any political party trying to erase presence of God in every facet of public life … cannot be trusted to protect our inalienable, God-given rights enshrined in the Constitution, and therefore should not be in power.”

Moreover, “the Democratic Party’s hatred of the Second Amendment and their increasing authoritarian instincts poses a serious threat to our freedoms.”

She cites comments from Rep. Beto O’Rourke, D-Texas, who said, “Hell yes, we’ll take your AR-15 and your AK-47,” in a 2020 presidential debate as one example of Democrats’ hatred of the right to bear arms.

Today’s Democrats are “Big Brother undermining our civil liberties,” Gabbard argues. “Every time they’ve had the opportunity, they choose to side with the security state instead of siding with our liberty, our freedom.” She notes Democrats’ opposition to her bill in Congress, which would have repealed the Patriot Act.

According to Gabbard, Democrats have betrayed Martin Luther King Jr.’s dream that we are judged by the content of our character rather than the color of our skin. Democrats have used identity politics to divide Americans and propagate “anti-white” racism, she contends. “They have become the racists they claim to hate.”

Gabbard also notes the Democratic Party’s erasure of women by rejecting biological reality and demanding that we replace words like “mother” with “birthing person.”

America is putting women at risk “just to please biological men who claim to be women at any given moment,” she warns.

Democrats are taking away opportunities from women in sports by allowing biological males to compete against them, she adds. “Behind the scenes … the Biden administration is trying to change Title IX by a backdoor rule that would remove women and biological sex from the Title IX statute.”

“What they’re really trying to do is force us to comply,” she says. “They’re trying to regulate our speech and thought with the threat of punishment. … By denying the biological differences of men and women, they’re erasing women.”

In doing so, Democrats are erasing objective truth. That’s really the issue here, she argues: “When one denies existence of objective truth, then there are no boundaries, no limits in society. Truth becomes whatever those in power want it to be.”