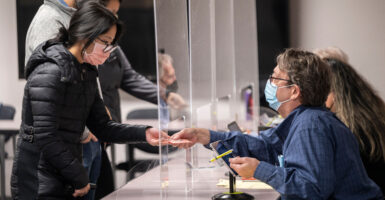 After the arrest last week of the CEO of an election software company amid alleged ties to China, at least two suburban counties outside the nation’s capital canceled contracts with the company, Konnech Inc.

The moves by Virginia’s Fairfax and Prince William counties follow cancellations by Detroit and Los Angeles County, where the District Attorney’s Office has alleged that Michigan-based Konnech stole information about election officials and poll workers.

Fairfax and Prince William canceled their contracts to use Konnech’s primary product, PollChief.

“Effective this week, we have suspended using PollChief and are erasing any data contained on their server to avoid any further data issues,” Prince William County announced in an Oct. 7 tweet.

Eric Spicer, Fairfax County’s director of elections, issued a statement that the county emailed Tuesday to The Daily Signal.

“Out of an abundance of caution, the Fairfax County Office of Elections has ceased its use of PollChief election officer management software used in Fairfax County, and is ending its contract with the software’s developer, Konnech,” Spicer said in the prepared statement.

Eugene Yu, founder and president of Konnech, was arrested by local police in Michigan in connection with an investigation into the possible theft of personal identifying information from election workers in Los Angeles County.

The Epoch Times reported Fairfax County’s decision Thursday, the day after the arrest became national news. The Fairfax County Republican Party noted that it previously made public records requests to the county about Konnech before the arrest of Yu, the company’s top executive.

“It is important to note that Fairfax County has never used software from this company to collect or store sensitive personal information such as Social Security numbers or banking information,” Spicer said in the written statement. “Furthermore, this software is not connected to the county’s voting systems or the state voter registration system. It cannot be used to tabulate votes or election results.”

Yu, born in China, emigrated to the United States in 1986, Newsweek reported. His company has 21 employees in America and six in Australia. Konnech had garnered contracts with 32 clients in North America.

Los Angeles County canceled a five-year, $2.9 million contract with Konnech. Los Angeles County District Attorney George Gascón, a Democrat under fire for being soft on criminals, said the alleged offense by Konnech had no impact on election results.

Detroit terminated its $320,000 contract with Konnech, which was approved last year by the City Council, the city’s NPR affiliate, WDET, reported Friday. The company had worked for the city since 2008.

“Our data, which is now back under our exclusive control, was housed on servers located in Lansing, Michigan. Konnech, per its contract, only provided logistical and call center support,” Detroit City Clerk Janice Winfrey told WDET.

“Out of an abundance of caution, all proper steps are being taken — including the termination of Konnech’s contract. My staff and I are confident that the 2022 election process will run smoothly, delivering, after all votes have been counted, an unimpeachable work product,” Winfrey said.

A Konnech representative asked The Daily Signal on Tuesday to send an email inquiry, which the company representative said would be passed along to the election software company’s public relations firm. No one had responded to that email inquiry as of publication time.

Konnech promotes PollChief as an “Election Worker Management System,” saying on its website: “Manage your poll workers with one comprehensive and intuitive software tool.”

The marketing text continues: “Our poll worker management tool is specifically designed for election managers. This software tool will eliminate the tedious portions of your management process and help you organize and streamline your operations, saving you time and money.”