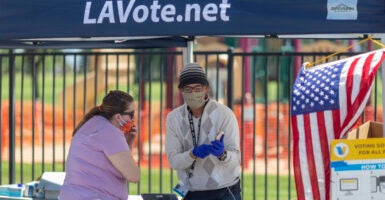 “Allegations that the personal data of election workers was criminally mishandled … raise deep concerns both for the privacy of Americans and for the integrity of our elections,” Rep. Claudia Tenney, R-N.Y., says. Pictured: Voters check in at a polling place at the National Soccer Center on May 12, 2020, in Lancaster, California. (Photo: David McNew/Getty Images)

Criminal charges in California against the chief executive of a software company said to be tied to China have sparked national concerns about election security.

Eugene Yu, founder and president of the election software company Konnech Inc., was arrested by local police in Michigan in connection with an investigation into the possible theft of personal identifying information for election workers in Los Angeles County.

“Allegations that the personal data of election workers was criminally mishandled by a company involved in the administration of elections raise deep concerns both for the privacy of Americans and for the integrity of our elections,” Rep. Claudia Tenney, R-N.Y., co-chairman of the House Election Integrity Caucus, told The Daily Signal in a written statement.

“Those involved in election administration must always be held to the highest standards for security, transparency, and accountability,” Tenney said.

The criminal case is part of a larger problem, Rep. Jim Banks, R-Ind., chairman of the Republican Study Committee, told The Daily Signal.

“This is just the latest example of why we need to do more to increase election security and transparency,” Banks said in a written statement. “That is why I introduced the Save Democracy Act to require nationwide voter ID, [which] allows two representatives from each presidential campaign to observe poll and ballot counting operations and ensures ballot counting is not interrupted or delayed once it has begun.”

Konnech, based in Michigan, develops software to manage election logistics such as scheduling poll workers. The company previously denied that it kept records anywhere outside the United States.

However, a press release issued Tuesday by the Los Angeles County District Attorney’s Office says that investigators “found that in contradiction to the contract, information was stored on servers in the People’s Republic of China.”

Los Angeles County District Attorney George Gascón, a Democrat under fire for being soft on criminals, said the alleged crime had no impact on election results.

“This investigation is concerned solely with the personal identifying information of election workers,” Gascón said. “In this case, the alleged conduct had no impact on the tabulation of votes and did not alter election results.”

He added: “But security in all aspects of any election is essential so that we all have full faith in the integrity of the election process.”

At the top of its landing page, the website says: “Streamline your election management process and save your staff time and money with our industry leading software products.”

“At Konnech, election logistic software is all we do,” Konnech’s “About page” says, adding:

For nearly 20 years we have been refining our software solutions based on the feedback and advice from the election managers we partner with and can confidently say that our technology is among the most effective, nuanced, and cost-saving in the industry. …

[O]ur founder and president, Eugene Yu, has implemented a client-centered approach. We listen to what you need in a system and will configure and customize our products so that you receive the exact solution you need.

Yu, born in China, emigrated to the United States in 1986, Newsweek reported. His company has 21 employees in America and six in Australia. Konnech has 32 clients in North America.

The Meridian Township Police Department in Michigan took Yu into custody Tuesday after the Los Angeles County District Attorney’s Office called for his extradition to California on suspicion of stealing personal identifying information.

The Daily Signal sought comment from Konnech by both email and telephone. A company employee said she would pass along the request and contact information to a media spokesperson, but no one had responded by publication time.

Based on what appears to be Konnech’s unverified Twitter account, the company’s most recent tweet was June 23, and said: “Konnech has been recognized as one of the 2022 ‘Michigan 50 Companies to Watch,’ an awards program presented by Michigan Celebrates Small Business.”

A Konnech spokesperson told The New York Times that the company wanted to learn the facts “of what we believe to be Mr. Yu’s wrongful detention.” The unnamed spokesperson stood by previous statements denying wrongdoing.

“Any L.A. County poll worker data that Konnech may have possessed was provided to it by L.A. County and therefore could not have been ‘stolen’ as suggested,” the spokesperson said.

Konnech’s main product is PollChief software, an election worker management system used by local governments to assist with poll worker assignments, communications, and payroll. PollChief requires employees to submit personal identifying information, which is retained by Konnech, according to the district attorney’s office.

“It raises a lot of concerns, particularly because we don’t yet know the extent of the information that was downloaded or stolen, whether it involved other election-related databases, to what extent those databases have been compromised, and what changes or manipulation of the information has occurred,” von Spakovsky told The Daily Signal.

“While local authorities are currently investigating, the possible involvement of Chinese sources requires that the FBI and the National Security Division of the Justice Department intercede in the investigation.”