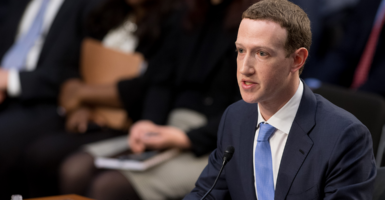 A New York GOP congresswoman who won her race by 0.03% of the vote is understandably concerned about election integrity and specifically about the more than $400 million Facebook CEO Mark Zuckerberg spent influencing the 2020 elections. Pictured: Zuckerberg testfies before a joint hearing of two Senate committees on April 10, 2018. (Photo:Saul Loeb/AFP/ Getty Images

A New York congresswoman who won election by a razor-thin margin recounted a major voting-related issue still causing her sleepless nights during a panel discussion on Tuesday.

“The thing that keeps me up at night right now is this issue of vote-harvesting that happened under Mark Zuckerberg, the Facebook billionaire, [who] spent $419 million on trying to go into the swing states to prime the pump, and a lot of this was legal,” Rep. Claudia Tenney, R-N.Y., said at the America First Policy Institute summit in Washington, D.C.

Tenney created the Election Integrity Caucus in the House after winning election in the 2020 cycle in a nail-biter by just 109 votes out of 312,987 ballots cast.

“[Zuckerberg] went in. They tried to get Democratic voters in key areas, places where they knew they could dredge up Democrat votes, and get them to vote,” she said. “The good news is, we cracked down on ‘Zuckerbucks.’”

Following the 2020 election, several states, including Florida and Arizona passed election reforms in response to the influence of “Zuckerbucks.”

Congressional Republicans also introduced the End Zuckerbucks Act in July 2021, which would “amend the Internal Revenue Code of 1986 to prohibit 501(c)(3) organizations from providing direct funding to official election organizations.”

“So, what this led to is, we’re making progress, and thanks to [the America First Policy Institute], [former Ohio Secretary of State] Ken Blackwell, and the gentlemen [West Virginia Secretary of State Mac Warner and Louisiana Attorney General Jeff Landry] sitting here, we were able to make some progress,” she said.

Landry also spoke out against “Zuckerbucks,” contending that similar tactics are used in socialist or communist countries.

“It’s important to understand exactly what the ‘Zuckbucks’ program did. What they did was, they used this money to basically engage in a ballot-harvesting operation through elected officials,” Louisiana’s top lawman said during the panel discussion. “Now, these are the kinds of tactics we see in socialist, communist, despotism countries.”

“I mean, make no mistake about it. That is exactly what happens in oppressive countries. When you tie the election system and one party together, that means you only can get one result,” he said. “And that’s what the ‘Zuckbucks’ did.”

Landry explained how it played out in his state back in September 2020 ahead of the November elections, prompting a lawsuit against the Center for Tech and Civic Life. The Zuckerberg-funded center received $350 million, which was a part of the $419 million total, from the Facebook founder and his wife, Priscilla Chan, during the 2020 election.

“Our secretary of state alerted us to these grant applications that were going out in Louisiana, and when we took a look at it, we said, ‘You know what? This is problematic,’” he said, adding that the grant applications were primarily going to Democrat-heavy parishes, which is what counties are called in that state.

“We drafted a lawsuit because we believed that the money was absolutely prohibited under Louisiana law, and we sued. We were the only state in the country at the time to sue,” he said, adding that he unsuccessfully tried to explain to other Republican attorneys general at that time what the situation was with ‘Zuckbucks.’

“We see today through the investigations that have been conducted how corrosive this money was,” Landry said.