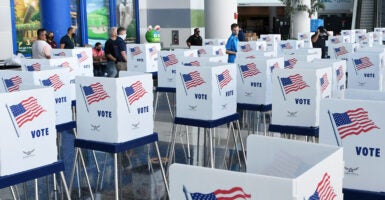 Florida counties that received money from a nonprofit financed by Facebook CEO Mark Zuckerberg either have paid back or are in the process of paying back all funds that weren’t spent during the lead-up to the 2020 presidential election.

The move is in compliance with a new Florida law that restricts private money from funding election administration.

The Chan Zuckerberg Initiative gave almost $400 million last year to the Center for Tech and Civic Life, a left-leaning nonprofit that used the money for grants to election jurisdictions across the country to deal with challenges arising from the COVID-19 pandemic.

Many critics objected that the money predominantly went to Democratic-leaning jurisdictions.

The Center for Tech and Civic Life gave $6.8 million to Palm Beach County, one of the more heavily Democratic counties in the state, for use in the 2020 election.

The office of the Palm Beach County Supervisor of Elections did not respond to an inquiry from The Daily Signal.

The Center for Tech and Civic Life gave at least $11.8 million to Florida jurisdictions, according to a March report from the legal foundation.

“The return of this money to [the Center for Tech and Civic Life] is a victory for election integrity,” J. Christian Adams, president of the Public Interest Legal Foundation, said in a public statement last week.

“Zuckbucks were the biggest factor, juicing blue areas in 2020. A private citizen should not be allowed to influence how elections are run,” added Adams, a lawyer who used to work in the Justice Department’s Voting Section. “At the Public Interest Legal Foundation, we are proud to have played a role in ensuring that this money will not be spent to influence the Florida elections in 2022.”

No agency or state or local official responsible for conducting elections, including, but not limited to, a supervisor of elections, may solicit, accept, use, or dispose of any donation in the form of money, grants, property, or personal services from an individual or a nongovernmental entity for the purpose of funding election-related expenses or voter education, voter outreach, or registration programs.

Officials from two other Florida jurisdictions informed the legal foundation that they were in the process of returning grant money to the Center for Tech and Civic Life.

Leon County requested and received an extension from the Center for Tech and Civic Life to spend the remaining $664,599.64 by June 30, Alex Mosca, public information specialist in the office of the county’s supervisor of elections, told The Daily Signal. The county spent all of the money by May 6, Mosca said.

The Center for Tech and Civic Life sent the Zuckerberg-bankrolled election grants to 2,500 jurisdictions across 49 states for election administration to pay for additional polling places, ballot drop boxes, “voter education,” and other matters amid the COVID-19 pandemic.