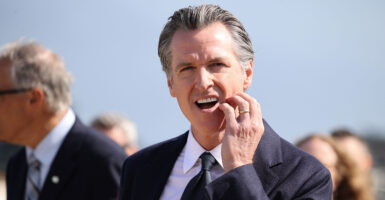 California Gov. Gavin Newsom—seen here Thursday at a climate-related agreement event with the governors of Oregon and Washington state in San Francisco—last week gifted labor unions in the state with a $400 million windfall courtesy of the state's taxpayers. (Photo: Tayfun Coskun/Anadolu Agency/Getty Images)

This legally questionable, ethically adulterated move is yet another blow against beleaguered Californians.

On its surface, the law, Assembly Bill 185, provides $400 million of taxpayers’ money to a select group of people who purchase a private, optional service. (The so-called tax credit is refundable, or available to people who do not pay state income taxes, which makes it a payment instead of tax credit.)

The stated intent “is to help individuals with the cost of being a member of a union.”

But California lawmakers haven’t passed or proposed bills providing hundreds of millions of dollars to help individuals with the cost of becoming members of AAA or their local gym or farm bureau. So, why the special handouts for labor unions alone?

Here’s where the legal and ethical problems arise.

Unions directly finance politicians’ campaigns. According to a conservative estimate from the California Policy Center’s Edward Ring, public sector unions in California spend at least a third of members’ dues—$300 million per year, or $600 million per election cycle—on explicitly political purposes, such as campaign contributions that go almost entirely to Democratic candidates and lobbying for almost exclusively liberal causes.

There is no special interest in California that wields more influence over state and local politics than public sector unions … . With rare exceptions, to defy their agenda is certain political suicide.

And as Jon Coupal, president of the Howard Jarvis Taxpayers Association, noted:

California politicians and public sector unions likely think they’ve found a workaround—forcibly extracting union dues from taxpayers instead of workers. But that’s arguably an even more atrocious free speech violation, because politicians are forcing taxpayers to fund the political speech of a private organization that they are prohibited from joining.

President Franklin Roosevelt warned against public sector unions, arguing that the whole of the people who pay for government wouldn’t have a seat at the negotiating table with public sector unions. Now, not only do California taxpayers not have a seat at the table, but they are forced to fund the salaries of both politicians and unions as they simultaneously seek to dig deeper into taxpayers’ pockets.

Talk about taxation without representation.

Consider one possible scenario: California politicians agree to $10,000 wage increases for public employees, unions increase workers’ dues by $1,000 (since they just delivered $10,000 wage gains), taxpayers pay for roughly $333 of that increase (the exact amount is to be determined), and then unions spend $500 of those additional dues on politicians’ campaigns and the other $500 on their own personal benefits (including political causes that gain them power and money).

It’s a win-win-win for everyone who has a seat at the table.

And a giant loss for those excluded from negotiations who have to foot the bill.

Moreover, while taxpayers don’t directly pay the compensation of private sector union members, they are nevertheless affected by their political activities. Unions were the source, for example, of California’s AB 5 law that’s cost thousands of California independent contractors their livelihoods and contributed to an estimated quarter of a million people leaving the state last year alone.

This new handout might seem like a win for unions and the politicians they fund, but even if the law stands, it will add to the policies that are driving up costs, limiting choices, and making life harder for Californians.

If California lawmakers want to help workers, they should seek to expand workers’ choices and opportunities, including allowing alternatives to one-size-fits-all union representation.