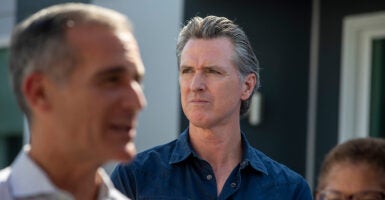 Gov. Gavin Newsom, pictured at a Homekey site on Aug. 24 in Los Angeles, has referred to part of his own jurisdiction as “a scene from ‘a Third World country.’” (Photo: Brian van der Brug/Los Angeles Times/Getty Images)

Declining population for the first time in its existence, rising violent crime rates, soaring homelessness, the highest gas prices in the country, companies leaving in droves—California’s future is withering away.

It’s no wonder then that Gov. Gavin Newsom himself has referred to part of his own jurisdiction as “a scene from ‘a Third World country.’”

Nonprofit California Forward reported earlier this year that “In terms of Education, another pillar of prosperity that tracks performance across the different stages of education, utilizing indicators like early childhood education and graduation rates, California is broadly similar to Latvia, the small country of 1.9 million in the former Soviet Bloc,” yet “Latvia has a GDP per capita of 17,619 or 22% of California.”

At the National Conservatism Conference in Miami (aka NatCon), tech titan Peter Thiel gave a withering, spot-on analogy comparing the striking similarities between California and Saudi Arabia. Both are subsidized heavily by “insane cash flows” of their main industries—oil for the Arab “Magic Kingdom” and tech for the Golden State.

“The way I would summarize the California framing,” said Thiel, a longtime resident of San Francisco and, since 2018, Los Angeles, “it’s roughly somewhere in between. It’s not as good as Norway. We’re not as bad as Equatorial Guinea. You should think of it basically roughly on par with Saudi Arabia.”

The billionaire tech investor, who said he recently bought a house in Miami that’s doubled in value since 2020, said massive subsidies enable an expansive, inefficient, bureaucratic class that crowds out poorer people by driving up real estate prices.

Thiel said both California and Saudi Arabia have their own form of extreme religion—strict Islamic Wahhabism (which restricts women’s rights, for example) with the Saudis and liberal, orthodox wokeism for Californians. But he said most of the bureaucratic machines that run these cultural behemoths are “something like 20% true and 80%” convenient man-behind-the-curtain manipulation.

“It’s just sort of the Saudi prince bringing alcohol into the country or Gavin Newsom having dinner with friends at the French Laundry,” Thiel said. “That’s actually in some ways reassuring because it shows that you don’t really believe the Wahhabi or the woke nonsense, even though it sort of is part of the ideology … We should not confuse it as the main thing that’s going on.”

Thiel said while it’s easy to poke fun at the excesses of California’s terrible policies, he cautioned that Republicans shouldn’t just use “nihilistic negation” of these policies—wokeness, soft-on-crime, terrible energy policy and business regulations—without offering their own positive vision.

“We’re leaning way too far into the nihilistic negation,” Thiel said. “We don’t like the woke stuff, all of that’s true, but it’s not necessarily the way we get back to growth.”

We need a road map to restore California’s economy, protect working-class jobs from destructive regulation, tamp down inflation, protect our southern border, and empower parents with school choice that rewards excellence for students.