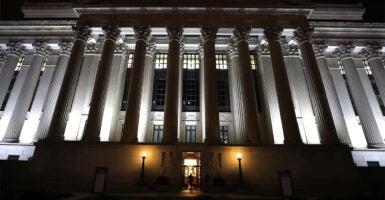 The Biden administration has politicized the National Archives, pictured in 2017, which no longer provides transparency in public records. The agency would not answer by statutory deadline a FOIA request from The Heritage Foundation’s Oversight Project for records related to the FBI’s raid on former President Donald Trump’s Florida home. (Photo: Mark Wilson/Getty Images)

Established in 1934, the National Archives has a mission to identify, protect, preserve, and make publicly available all historically valuable records.

But the National Archives has become politicized by the Biden administration and no longer provides transparency in public records.

Jodi Foor, the National Archives’ deputy Freedom of Information Act officer, would not answer a FOIA request from The Heritage Foundation’s Oversight Project for records related to the FBI’s raid on former President Donald Trump’s Florida home within the statutory timeline.

This inaction forced The Heritage Foundation to sue to get a response to our request. (The Daily Signal is Heritage’s multimedia news organization.)

In releasing its first tranche of records about the Trump raid, the National Archives withheld 96% of the records sought by Heritage from being released to the public, or about 1,612 pages.

The National Archives released only 65 pages of those 1,612 pages of records, with 1,547 pages withheld under the “deliberate process privilege” exemption as well as an exemption that protects from disclosure records compiled for law enforcement purposes.

The deliberate process privilege is an exemption that gives federal agencies the discretion to withhold certain policymaking documents that were prepared to assist a decision-maker in making a final determination.

For 95% of the documents withheld, the National Archives asserted that officials were protecting deliberations with Congress, Trump’s representatives, and other federal agencies.

Foor’s lack of transparency raises eyebrows because Congress tasked the National Archives to mediate all disputes regarding the Freedom of Information Act, or FOIA; arbitrate disputes between requesters and federal agencies; identify methods to improve compliance with the statute; and educate stakeholders about the FOIA process.

Not surprisingly, Foor isn’t even following Attorney General Merrick Garland’s new FOIA transparency policy, which he announced in a March 22 memo. This policy states that records “should not be withheld from a FOIA requester unless the agency can identify a foreseeable harm or legal bar to disclosure.”

Withholding 96% of records requested doesn’t show openness in any respect.

Garland’s memo on transparency goes on to state:

When an agency determines that it cannot make full disclosure of a requested record, FOIA requires that it ‘consider whether partial disclosure of information is possible’ and ‘take reasonable steps necessary to segregate and release nonexempt information.’

The FBI was able to disclose some information on each page of its affidavit justifying its Aug. 8 raid on Trump’s home in Florida, but the National Archives apparently isn’t able to do so in any sense.

Foor’s lack of transparency also conflicts with former President Barack Obama’s FOIA memorandum, which he personally issued on his first day of office on Jan. 20, 2009.

the government should not keep information confidential merely because public officials might be embarrassed by disclosure, because errors and failures might be revealed, or because of speculative or abstract fears. Nondisclosure should never be based on an effort to protect the personal interests of government officials at the expense of those they are supposed to serve.

Foor did not say that the National Archives had a previous agreement with Congress to withhold these records in her response to The Heritage Foundation’s Oversight Project.

So it appears that Foor is using this exemption improperly to protect the personal interests of former Archivist David Ferriero (who departed the agency April 30) and acting Archivist Debra Steidel Wall (who started May 1) at the expense of the American public.