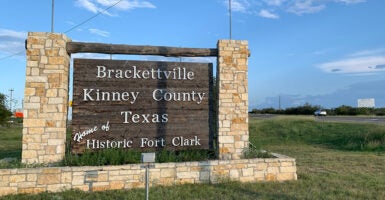 “We have nothing other than our ranchers and hunters," Kinney County Sheriff Brad Coe says of the flood of illegal aliens crossing the border from Mexico. “We lose the hunters, we lose the landowners, what do we have left? Nothing.” (Photo: Virginia Allen/The Daily Signal)

BRACKETTVILLE, Texas—It was 5:15 p.m. on a Monday afternoon and the 13th hour of Sheriff Brad Coe’s workday.

A human smuggler had been caught trying to sneak illegal immigrants across the border into the U.S. The sheriff counted aloud, recalling the five suspected human smugglers who were caught before 8 a.m. that day, Sept. 26.

Between January and June of this year, officials caught a total of 292 suspected human smugglers in Kinney County, which has a population of about 3,600. Last year, law enforcement in Kinney County caught 169 smuggling suspects.

The migrants aren’t staying in his county, the sheriff said, but the local community is beginning to feel the effects of illegal immigration.

The heartbeat of industry in this border community is ranching and hunting, including hunting on exotic game ranches.

“The hunters, they come in, they lease property, [spending] $30,000 or $40,000 a year,” Coe said. “And then if they quit coming, [and] they are starting to slow down because of some of the stuff that’s walking through, [the landowners will] lose that money.”

The sheriff says it’s not uncommon for the hunters to return to their cabin or trailer at the beginning of the season and find that it has been broken into.

One local rancher has a 3,000-acre pasture that he can’t use because illegal migrants “keep cutting his fence,” Coe said.

Unlike Del Rio or Eagle Pass, two other Texas border jurisdictions, Kinney County has no port of entry. Cities with ports of entry benefit economically from a greater number of Border Patrol agents and military personnel shopping in the community, eating at restaurants, and staying at local hotels.

In Kinney County, “we have nothing other than our ranchers and hunters that come and support this county,” Coe said. “We lose the hunters, we lose the landowners, what do we have left? Nothing.”

County Attorney Brent Smith, a Republican, says he has prosecuted about 4,020 cases since taking office in January 2021.

About 4,000 of the 4,020 are connected directly to illegal immigration, Smith said. Crime has “skyrocketed,” he told The Daily Signal.

Two types of migrants cross the border illegally, Smith said—those who “self-surrender trying to get asylum” and those who intentionally evade the Border Patrol.

Many of the migrants who cross into Kinney County don’t want to be caught, which sometime results in high-speed car chases through town, the county attorney said.

Officials put up a rock barricade outside the local public school “to prevent smugglers and drivers [from] driving into campus during car chases,” Smith said.

Some of the illegal immigrants don’t survive the perilous journey. Already this year, Smith estimates, about 20 of their bodies have been found in the county.

“Once hunting season starts and all the hunters get out in the woods, they find a lot more [bodies], usually,” Smith said. “A lot of times, animals destroyed them. You know, you’ll find a rib here and they’re like, ‘Do you report this? Is this a human rib or animal rib?’ You know, unless you find the skull, most people don’t know the difference.”

The humanitarian crisis of illegal immigration is not migrants being “flown to Martha’s Vineyard,” Smith told The Daily Signal, but the “dead bodies all over the whole of the border.”

The influx of illegal immigrants has led many ranchers in Kinney County to install game cameras on their property. The county, and some ranchers, use thermal drones to monitor the migrants.

Smith sent The Daily Signal a video, embedded below, that a thermal drone captured; it shows what officials believe to be a group of illegal immigrants carrying backpacks over the border into Kinney County.

In July, the number of illegal immigrants crossing the southern border led officials to declare that Kinney County is under invasion.

Now, Smith says, Texas Gov. Greg Abbott, a Republican, should declare that the whole state is under invasion.

Abbott also has attracted attention to the border crisis by busing thousands of illegal immigrants to Washington, D.C.; New York City; and Chicago.

If Abbott declares an invasion, Smith says, he believes that the governor then would be able to “enforce the border.”

“There’s two solutions,” Smith said, adding that the first is for the federal government to take action, which he believes the Biden administration will not do.

Administration officials know “exactly what they’re doing,” Smith said. “They’re facilitating [illegal immigration.] So, them solving the problem is not a solution.”

“So, you’re left with one other solution,” he said, “and that’s the governor. So, in my opinion, the only solution to this crisis is Gov. Abbott.”