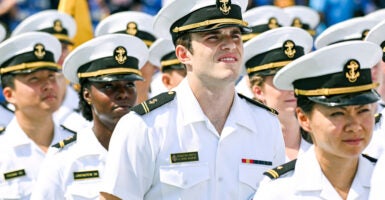 A critical race theory whistleblower hotline is credited with exposing the Navy’s “pronoun” training focused on creating safe spaces. Pictured: Navy midshipmen stand on the field during the march on at the Naval Academy's football game against the University of Delaware on Sept. 3 at Navy-Marine Corps Memorial Stadium in Annapolis, Maryland. (Photo: Mark Goldman/Icon Sportswire/Getty Images)

Efforts to uncover the prevalence of woke, divisive critical race theory-based equity training and policies in the military are bringing to light an extensive problem.

The latest revelation is the Air Force Academy promoting gender-based “inclusivity” indoctrination while advertising for a fellowship that excludes cadets based on sexual orientation.

Those are only the latest tips of the critical race theory and gender ideology icebergs.

These councils and their associated diversity, equity, and inclusion advisers have created a nomenklatura enforcing political preferences that Nadia Schadlow has correctly equated with Soviet political commissars.

One of these diversity apparatchiks was recently uncovered and is under investigation for racist and derogatory public statements. This person is the Department of Defense’s education activity chief diversity officer. This shouldn’t surprise anyone, as this agency has been pushing these divisive ideas for some time.

But this is only a reflection of deeper rot, which also has seemingly infected the military medical community’s thinking.

Meanwhile, the Navy’s own medical command’s culture of excellence prioritizes support for diversity and inclusion, albeit dropping the equity part. Understanding how these efforts affect medical guidance, approval for grants, and selection of applicants merits closer scrutiny, especially given the vice president’s recent remarks on equity in allocation of disaster-recovery assistance and the Federal Emergency Management Agency’s past guidance on equity in COVID-19 vaccination distribution.

A critical race theory whistleblower hotline created by Sen. Tom Cotton, R-Ark., and Rep. Dan Crenshaw, R-Texas, has helped bring a lot of this sort of thing to light, but must be sustained and awareness increased among service members. Already it is credited with exposing the Navy’s “pronoun” training focused on creating safe spaces, and so too could it uncover malfeasance of military medical training and policies.

The nonprofit watchdog group Judicial Watch also has been active in uncovering critical race theory prevalence in the military, and it has outstanding lawsuits against the Navy seeking information on Naval Academy training records. It recently was credited with uncovering critical race theory ideology in the training at the U.S. Military Academy at West Point, despite the Army’s protestations to the contrary.

Overall, the effect has been to subordinate operational readiness in defense of the nation to social shibboleths such as diversity, equity, and inclusion.

Spoehr rightly points out that this has already led to unwise medical decisions, such as waiving prohibitions on HIV-positive personnel from serving in combat zones. Given that soldiers, sailors, and Marines bleed together in combat, this operationally uninformed policy change makes little medical sense.

So, where will all of this lead? The revolutionary French navy of the 1790s provides a good case study. It was a fleet that years earlier was victorious over the British navy at the Battle of the Capes, the 1781 battle that helped us win independence at Yorktown. Revolutionary France undid its fleet’s readiness by prioritizing political reliability as the principal qualification for command at sea.

As a result, three years later, France was unable to muster an effective naval response to British blockades and interdiction of its shipping during war with Britain. As such, the revolutionary French navy suffered a string of naval defeats for 26 years, eventually leading to Napoleon’s defeat in 1815.

Hopefully, our nation will heed such lessons and reverse the caustic influence of critical race theory on military good order and discipline. Then-President Donald Trump’s September 2020 executive order banning related training in the federal government came too late in his administration to markedly change the trajectory in the military.

So deeply ingrained is critical race theory that even a commander in chief’s efforts can be stymied. While Trump was still president, the Navy was so enraptured by the tenets of diversity, equity, and inclusion that in July 2020, it launched Task Force One Navy, a deep look into the prevalence of racism and extremism in the ranks.

The Task Force’s final report, released in January 2021, revealed a Navy that’s still remarkably egalitarian, despite anecodotal claims of racism and extremism. That report was followed shortly by an unfortunate embrace of problematic books such as Ibram Kendi’s “How to Be an Antiracist” on naval professional reading lists.

When it comes to proponents of critical race theory, facts and unbiased research are in short supply. Moreover, despite the military political leadership’s protestations to the contrary, no statistically relevant data has been provided. Little evidence validates the time and energy devoted to diversity, equity, and inclusion indoctrination, or claims of rampant racism and extremism in the military.

It has in fact been a straw man to instill political compliance among the rank and file, sowing discord where little existed before in the military.

In the immediate future, efforts such as the critical race theory whistleblower hotline and legal requests for information must continue apace, and new vigor must be directed at uncovering critical race theory’s influence in the military medical community.

Left to spread for too long, rooting out the caustic influences of critical race theory on our military will regrettably take years to undo.