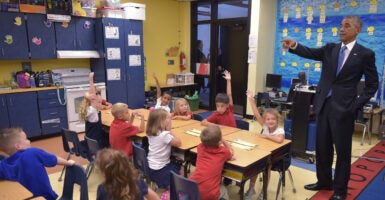 An investigative report from the Claremont Institute details how educators at some military bases' elementary and secondary schools are pushing radical gender ideology and divisive critical race theory in the classrooms. Pictured: Then-President Barack Obama chats with schoolchildren during an unannounced visit to an elementary school at MacDill Air Force Base in Tampa, Florida, Sept. 17, 2014. (Photo: Mandel Ngan/AFP/Getty Images)

In 2021, America witnessed the chairman of the Joint Chiefs of Staff, Gen. Mark Milley, express to Congress a desire to know more about “white rage.” Until controversy led the Navy to change its reading list, it recommended that officers and sailors read the latest racialized pseudoscience from left-wing academics.

We learned that educators at military bases are pushing radical gender ideology that seeks to unsettle and disrupt gender identity starting in kindergarten. A seventh-grade humanities teacher from a military base in Spain said, “Kids as young as 4 years old are already starting to develop a stable understanding of their gender identity. So, elementary school is the perfect time, because you can really show students the diversity of gender expression and gender activity.”

Later in the presentation, it’s made explicit that educational activities about gender expression and identity are particularly important precisely because parents often disapprove of such instruction. This is the new core of pedagogical indoctrination in America: What happens at school, stays at school.

In previous generations, parents were informed frequently by teachers about lesson plans and classroom happenings. These days, parents are kept in the dark as possible enemies, as the teachers are the only “experts” competent to guide children on such sensitive matters as gender and sexuality.

Educators are also pushing the themes of critical race theory and “antiracism” popularized by academic activists such as Ibram X. Kendi. The main assumption of such education is that all differences in group outcomes—e.g., in social welfare, economic success, educational attainment, health outcomes, etc.—must be due to racism. As Kendi has put it: “Racial inequity is evidence of racist policy.”

One of the presenters, an educator at an Army base in Italy, used the example of one of his students complaining about the history of great inventors in America—because the inventors were overwhelmingly white. If inventors are disproportionately white, this must be evidence of racism, even if there’s no evidence of any racist policy driving the unequal results.

The educators featured in our report would no doubt defend their recommendations on gender expression and identity as benign and even beneficial attempts to promote “inclusion.” Similarly, they would defend discussions of “white privilege” and “systemic racism” as merely discussions of the history of race and racism in America.

But as scholar James Lindsay has documented tirelessly, sowing confusion about gender, dividing children from parents, teaching that racism is pervasive and colorblindness impossible, and dividing children by race into classes of oppressors and oppressed—these are all neo-Marxist techniques meant to undermine the traditional American regard for constitutionalism and replace it with race-centered redistributionism.

This is not education; it’s ideological grooming. Rather than learning objective facts about the world or how to be civic-minded Americans, students are encouraged to transform themselves and their environment in the service of revolutionary ideologies about gender and race.

Whether they know it or not, these teachers and the Department of Defense Education Activity that employs them are useful idiots in a revolutionary and anti-American project with deep left-wing intellectual roots.

As the U.S. Senate takes up the National Defense Authorization Act in the coming weeks and months, legislators ought to take a very close look at what we’re teaching the children of our military personnel overseas.