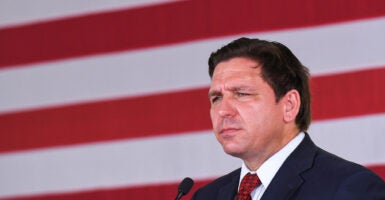 What’s been happening at America’s southern border is so crazy and so out of control that it’s almost hard to comprehend.

As with all national issues, the power of the corporate media to set the narrative for the massive (but shrinking) number of Americans who still rely on them exclusively to stay informed has also played a role. The media is not interested in the border story. Sure, they cover it when they absolutely must, but they have been downplaying the catastrophe from the start.

Florida Gov. Ron DeSantis, Arizona Gov. Doug Ducey, and Texas Gov. Greg Abbott are changing all that. They are creating a story that even the corporate media can’t ignore. In the process, Americans are being forced, for the first time, to confront the reality of the tragedy on America’s southern border.

You don’t have to be anti-immigration to believe in national borders. Countries need borders. It’s a fundamental aspect of national sovereignty. It’s crazy to have to write down something so obvious. Every normal person knows this. But our border policies are not being run by normal people. They are being run by left-wing ideologues with views completely outside mainstream political thought.

The result has been catastrophic for America. It’s also been a tragedy for many migrants, but no one has paid a larger price for the complete breakdown on the border than America’s border towns. Many of these small communities have been crying out for help. They are overrun. They don’t have the resources to cope.

There are many completely innocent migrants crossing the border. They are risking everything to get their families to a better place. They have energy and guts. They are just the sort of people our country should want; we just can’t take them all in without some orderly system. To the extent that they cover the border crisis at all, the corporate media is fixated on telling their story.

There is another side of the border crisis. The part that the corporate media loves to downplay is not all the migrants crossing are innocent and noble. When you, in effect, open the border completely, it’s an invitation to the non-innocent. Gang members, criminals, drug dealers, and even terrorists can cross with the rest.

These people are all landing in America’s border communities. Many of these small towns have been completely transformed in the process. Jails are overflowing. Hospitals can’t keep up. Crime is booming. Drugs are everywhere. People don’t feel safe. Trash is piled up. And the strain on local budgets is astounding. It’s a true crisis.

The biggest problem with the growing border crisis is nobody seems to care. The towns hit hardest are predominantly small and isolated to a few states. The people who write for America’s top newspapers and the talking heads on American television are in the big cities. Conservative media is all over the story. My news company, The Daily Caller, has had reporters all over these border communities. The corporate media? Not so much.

As with the opioid crisis that predated it, crises more isolated to smaller communities can take a long time to seep into the national consciousness.

Opioid overdoses and deaths were skyrocketing to record levels for many years before anyone in America’s media centers seemed to notice. As huge swaths of America were in full crisis, elite America was still celebrating the Sackler pharmaceutical family who was at the center of the problem. As overdose deaths and crime were booming to record levels in places like Appalachia, the Sackler name was going up on museums, universities, and libraries in New York City and other high-wealth locations. There are literally two Americas.

The transport of migrants to elite northern towns has broken the bubble. Suddenly, Washington, D.C.; New York; and even Martha’s Vineyard have a problem. Now, not surprisingly, everyone’s interested.

The main controversy is whether the internal movement of migrants is a human rights violation. Once someone enters a country illegally, the most appropriate legal course is to deport them altogether. By that standard, it is not necessarily unreasonable for the country to move them to the most appropriate location. Nonetheless, there is certainly something that seems un-American about moving people, even those entering the country illegally, against their will.

In this case, however, it doesn’t seem to have happened that way.

When migrants were bused from Arizona to Washington, D.C., the D.C. mayor alleged that they were tricked and taken against their will. Our reporter interviewed migrants just as they were getting off the bus in D.C. The people she spoke with indicated it was totally voluntary. In fact, they were grateful for the opportunity to be transported to these so-called sanctuaries. DeSantis told us the same is true of the migrants he sent.

None of this solves the border crisis. The border has been a huge issue for years, but it’s important to remember that the current acute crisis is voluntary.

President Joe Biden scrapped the policies put in during the Trump administration, even though he had no replacements in place. They literally opened the border. America cannot let in millions of people per year with no meaningful screening or limits.

This week, as flight radar indicated one of his planes was headed for Biden’s vacation town of Rehoboth Beach, Delaware, rumors flew that DeSantis must be sending migrants there. We sent a reporter to check it out. Turns out the whole thing was a hoax.

Our reporter didn’t find any migrants, but she found a lot of other reporters. That’s something that never happens on her trips to the Rio Grande Valley. As she said, “I’ve never seen this much media at the border, just here in Delaware.”

Now at least people are talking about the issue. By America 2022 standards, that’s progress.