To Corporate Media, Some Criminals and Victims Are More Equal Than Others 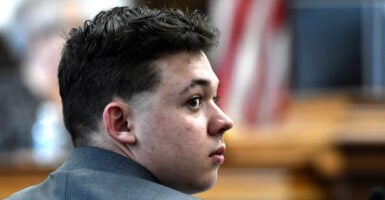 Kyle Rittenhouse looks back at the potential juror pool during the jury selection process at the county courthouse on Nov. 1 in Kenosha, Wisconsin. Rittenhouse was acquitted Nov. 19 of all charges in the shooting of three men—two of whom died—amid rioting in Kenosha in August 2020. (Photo: Sean Krajacic/Getty Images)

That much is clear from a fatal hit-and-run in the early morning hours of Sunday involving a North Dakota man who admitted to hitting a teenager with his car, killing him.

Shannon J. Brandt, 41, said he did it because he thought the teen was part of a “Republican extremist group” that was out to get him, according to court documents, as reported by The Daily Beast.

News accounts don’t say, however, how many people were in that supposed “Republican extremist group,” whether any of them were wearing red “MAGA” baseball caps, or what they were doing out on the streets at 2:30 Sunday morning in a town so tiny its population numbers between just 40 and 60, depending on whose count you believe.

Nor did the reports explain the nature of the threat the “extremists” supposedly posed to Brandt (or even what qualified them as “extremist” to begin with), so we’re left to wait until the case goes to court for all this to come out.

Brandt was charged with one felony count of vehicular manslaughter and one count of leaving the scene of an accident in connection with the death of 18-year-old Cayler Ellingson. He was also charged with driving under the influence after a breathalyzer found him over the .08 legal limit for alcohol.

Brandt was released Tuesday on $50,000 bond, but not before complaining about the bond amount. At least he is alive to pay it.

“I have a job, a life, and a house and things that I don’t exactly want to see go by the wayside—family that are very important to me,” he whined of the legal peril he now finds himself in, according to Fox News. (The moral of the story: If you can’t do the time, don’t do the crime.)

So, does Brandt really expect us to believe that he’s the victim here? If so, he will get his chance to make that case in court at a preliminary hearing on Oct. 11.

What will be at least as interesting, however, will be to see whether—and how—the corporate media covers the court proceedings in this case, given the political and ideological coloration of it.

The reflexive, yet entirely understandable, assumption in Republican and conservative circles is that it would get a lot more sympathetic ink and airtime—and furrowed-brow punditry—in the media were the situation reversed and a young, liberal Democrat had been the victim.

Will the corporate media give Brandt’s day in court the gavel-to-gavel coverage that they gave to the trial of Kyle Rittenhouse, the teen charged with shooting three men—killing two—amid rioting in Kenosha, Wisconsin, in August 2020?

To the liberal media’s chagrin, the jury found Rittenhouse—who many of them had disparaged as a “vigilante”—not guilty Nov. 19 after he testified he was acting in self-defense. Some on the Left went so far as to attribute the Rittenhouse acquittal to “white privilege.”

Just two days after Rittenhouse was rightly exonerated, the driver of an SUV killed six and injured 62 others by plowing through the annual Christmas parade in Waukesha, Wisconsin, a scant hour away from Kenosha.

Darrell Brooks Jr., 40, was arrested and charged with six counts of first-degree intentional homicide and 77 other charges in connection with the Nov. 21 massacre.

In contrast to the Rittenhouse case, for much of the liberal media, it was a one- or two-day story, likely because it didn’t fit their preferred “racist” narrative: Brooks is black; the victims were white.

To borrow a line from George Orwell, some criminals and victims are more equal than others, at least in the eyes of much of the media. You could ask Jussie Smollett, the black ex-actor whose January 2019 hate-crime hoax was reflexively believed by most of the liberal media right up until his conviction back in March. Or Nick Sandmann, the white Covington, Kentucky, high school student, who was unfairly vilified by many in the corporate media for a harmless January 2019 staring match with a militant Native American activist at the Lincoln Memorial. (Author Reza Aslan even tweeted about Sandmann: “Have you ever seen a more punchable face than this kid’s?”)

Brooks’ trial is set to begin Oct. 3, and it will be interesting to see whether it gets the same intense media coverage as Rittenhouse’s trial (along with a similar accompanying presumption of guilty until proven innocent). Don’t hold your breath.