Yes, a Black Kyle Rittenhouse Would Still Be Acquitted 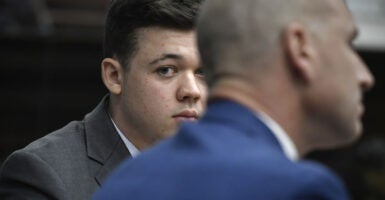 Countless blue-check pundits on social media implied that Kyle Rittenhouse’s acquittal was based entirely on his race. Pictured: Rittenhouse listens as Judge Bruce Schroeder discusses how the jury will view video footage during deliberations at the trial held at the Kenosha County Courthouse on Nov. 17. (Photo: Sean Krajacic-Pool/Getty Images)

A jury acquitted Kyle Rittenhouse last month on charges related to his Aug. 25, 2020, shooting of three white men during a chaotic, destructive night of civil unrest in Kenosha, Wisconsin. This came as little surprise to anyone who watched the trial with an open mind.

Regardless of one’s thoughts on the wisdom of a 17-year-old arming himself to defend the livelihoods of strangers, Rittenhouse had strong claims of lawful self-defense, and conviction seemed like an uphill battle for the state from the outset.

And yet, countless blue-check pundits on social media immediately lost their collective minds in a race-baiting game of “What if Rittenhouse was black?”

Their presumptive implication is that Rittenhouse’s acquittal was based entirely on his race. Several highly followed commentators went so far as to explicitly assert that no person of color could ever intentionally shoot someone with a gun he or she carried in public and be acquitted on grounds of lawful self-defense.

The idea that self-defense is a legal justification largely for white Americans and that no jury would ever acquit defendants of color who claim they acted in self-defense is not just overly reductive, it’s absurd.

Consider just some of the many non-white defendants who were acquitted of murder or attempted murder charges in recent years because juries determined they acted in lawful self-defense:

At the same time, there are plenty of recent and readily researchable cases where defendants of color were charged with serious felonies, yet had those charges dropped by prosecutors long before trial because the state believed it couldn’t disprove the claims of self-defense: Ajay Alvarez, Robert Chesser, Leon McCray Sr., Jawaun Thompson, Eduardo Macias, Shaneisha Heath, and Bernard St. Pierre.

If the talking heads of social media commentary aren’t aware of these cases, which again required nothing more than a basic Google search to find, it should come as no surprise that they’ve also failed to conduct basic research to support their claim that white Americans routinely “get away with murder” by “just claiming self-defense.”

First, this completely misrepresents the reality of Rittenhouse’s situation. He did not simply shoot three people, claim self-defense, and walk out of jail as though nothing happened.

Rittenhouse spent months in pre-trial detention, had his life placed on hold for a year-and-a-half, saw every aspect of his life scrutinized by a hostile national media, racked up untold tens of thousands of dollars in legal fees, and had to convince a jury of his peers that he acted in lawful self-defense.

It also ignores the many times in recent memory that high-profile white defendants unsuccessfully raised claims of self-defense. Just a week after the Rittenhouse verdict, a jury in Georgia convicted three white men of murder in the shooting death of Ahmaud Arbery, a black man. The jury discounted their claims of self-defense.

This is far from the only recent example:

It’s also not true that only white Americans get away with openly carrying firearms in public. While gun control has—to our national shame—historically been used to intentionally disarm non-white Americans, examples abound today of non-white gun owners open carrying firearms in contentious situations without being “immediately shot down” by police.

The American criminal justice system is imperfect. Racial disparities exist and should be addressed.

But simplistic, race-baiting narratives of self-defense as a legal justification solely for white defendants or that no black defendant in Rittenhouse’s shoes could have successfully claimed self-defense under similar circumstances distract from real problems.

A black Rittenhouse tried for those same actions under those same circumstances and with all relevant interactions equally caught on video very likely raises a successful claim of self-defense—a justification entirely warranted under the law, based on the evidence.

In a sensible world, we would at least acknowledge this, and stop demagoguing successful self-defense claims based on the defendant’s race.