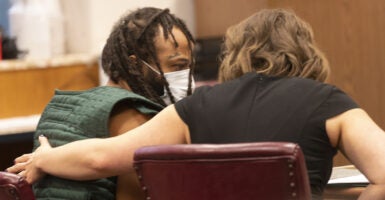 That news media is so monotonously, predictably biased that it has become absurd to hope for honest journalism. Every time something newsworthy occurs involving politically charged circumstances, it becomes painfully obvious that the media cannot help but choose sides.

A perfect example is the disparate treatment of the vehicular attack in Waukesha, Wisconsin, last month and the Kyle Rittenhouse shootings and subsequent trial in Kenosha, also in Wisconsin, last year.

In Waukesha, 39-year-old Darrell Brooks now faces six counts of intentional homicide after he drove his SUV through a crowded Christmas parade route on Nov. 21. Law enforcement officials say he drove in a weaving pattern, leading them to conclude that he was intentionally striking the parade participants.

Brooks has a long arrest record. In fact, he was accused of punching a woman and running her over with his car just weeks earlier. The woman was reportedly the mother of his child, and the car he used was the same SUV he drove through the parade on Nov. 21.

He also has a history of sharing violent content on social media. Brooks, who is black, has posted content that promotes violence against white people. It is curious, then, since all of the people killed in Waukesha were white, that scant few news outlets have dug into his online presence as they have with other criminal suspects.

In fact, the media was strangely reluctant to describe the assailant accurately and showed very little interest in understanding his possible motives.

Two days after the attack, when the sixth victim—an 8-year-old boy—had died of his injuries, The Associated Press ran a story under a headline that antiseptically referred to the incident as a “parade crash,” as though it could have been an accident. This was well after eyewitnesses and police had described Brooks’ actions as visibly deliberate.

A day after that, The Washington Post tweeted that the deaths had been “caused by a SUV,” as though it were some self-driving vehicle run amok. That tweet has since been deleted, following vocal criticism on social media.

When the city of Waukesha was observing a moment of silence for the victims a week after the incident, CNN tweeted that “a car drove through a city Christmas parade,” also seemingly unable to place the blame at the person behind the wheel.

One outlet even tried to reason that Brooks’ shocking rampage was not out of the ordinary.

USA Today ran a story on Nov. 23 arguing that as “horrible as the incident was, the brazenness of the apparent assault is not altogether unusual.” The article quickly pivoted from Waukesha to reports of incidents of drivers running into crowds of Black Lives Matter protesters over the last few years.

To be clear on this point: Ramming cars into crowds of people is abhorrent and criminal behavior. The news media should not have the attitude that, “Well, there’s a lot of this going around.”

The fact that Brooks was even out on the streets on Nov. 21—instead of in jail for hitting the mother of his child with a car days before—was curiously underreported. The media’s lack of curiosity on this matter likely stems from the fact that Brooks was released from jail due to disastrously low bail—$1,000—because the prosecutor, Milwaukee County District Attorney John Chisholm happens to be a leftist who champions leniency for criminals.

“Is there going to be an individual I divert, or I put into [a] treatment program, who’s going to go out and kill somebody?” Chisholm asked rhetorically in 2007, while musing about his bail reform philosophy. “Guaranteed. It’s guaranteed to happen.”

He was right. And the media is not aghast, because it fits into their larger worldview that the cash-bail system is racist. This view is shared by politicians like President Joe Biden and Sen. Bernie Sanders, I-Vt. Vice President Kamala Harris once even encouraged people to donate to bail out those who had been arrested in the Minneapolis riots in 2020.

Contrast the media’s blasé and incurious coverage of Waukesha with their scathing treatment of Kyle Rittenhouse, both when the teenager was arrested for shooting three people in Kenosha last year and during his trial last month.

After Rittenhouse shot three people in self-defense—killing two of them and wounding the third—during the riots in Kenosha in August 2020, he was immediately branded a “white supremacist” who illegally carried a weapon he was not lawfully allowed to possess across state lines, and who entered the riot with the intent to murder people.

Every part of that narrative turned out to be a lie.

The media described the shooting victims frequently as protesters who were there to express their outrage at the shooting of a young black male, Jacob Blake, a few days earlier.

Days after the shootings, NPR apparently conducted its own trial a year in advance, and accused then-President Donald Trump of raising the idea of self-defense “without evidence.”

Yamiche Alcindor of PBS took to MSNBC to castigate Trump for siding with someone who shot “unarmed” people who were merely “at a protest.”

There was suspicion that Rittenhouse was a dangerous right-winger because he expressed support for police on social media, according to The New York Times.

MSNBC’s Joy Reid was consistently the worst offender, as she frequently attributed Rittenhouse’s motives to white supremacy, and referred to the incident as a “vigilante shooting” by someone who killed “anyone he chose.”

And who can forget that then-candidate Biden called Rittenhouse a white supremacist as well?

The full-court press was so strong that Facebook blocked any content regarding the Rittenhouse case from turning up in searches.

At trial, the narrative fell apart. The charge that he was carrying an illegal gun was dismissed, as there was no evidence that he was in violation of Wisconsin state law. In any event, he did not cross state lines with the weapon.

The claim that he murdered “unarmed victims” disintegrated after video evidence clearly showed his attackers chasing him, striking him with a skateboard, and pulling a gun on him. It was abundantly clear that he acted in self-defense, and he was acquitted of murder charges.

While Rittenhouse was found not guilty by the jury, our own news media are guilty of extreme bias in their coverage of these two major news events. Month after month, we see this exposed in their reporting, and each time, we hope that they will learn their lessons and correct their slanted reporting.

But they never do.