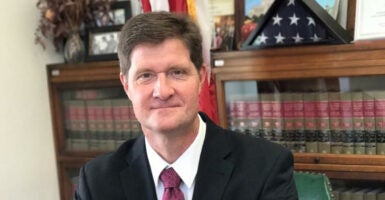 John Chisholm, pictured, the rogue Soros-backed prosecutor in Milwaukee County, released Darrell Brooks from custody when he should have sought no bail. On Nov. 21, Brooks drove his car through a Christmas parade, killing five adults and injuring more than 40 people, including children. (Photo: county/Milwaukee.gov)

After a summer of wildly destructive civil unrest followed by the looming shadow of the high-profile trial of Kyle Rittenhouse, residents of Wisconsin suffered another blow in the form of unspeakable tragedy.

Five people were killed and more than 40 injured when a driver plowed through participants of an annual holiday parade, appearing to intentionally speed up and swerve into lines of marchers, before speeding off.

Hours later, police arrested 39-year-old Darrell Brooks as the suspected driver of the vehicle. He is charged with five counts of homicide.

Investigators are still looking into possible motives, including, according to some reports, the possibility that Brooks did not necessarily target the parade but was instead attempting to flee from a knife fight.

Whether the act was intentional or merely reckless and without regard to others, one thing is already clear—what happened in Waukesha was entirely preventable.

Darrell Brooks should have been in jail several times over. The devastation he wrought happened only because grossly reckless bail policies touted by local officials enabled the release of an unrepentantly violent man whose actions routinely placed members of the community in serious danger.

Brooks is a career criminal with a long rap sheet. His history of violence—including violence toward women—is well documented, and wide-ranging.

In 1999, Brooks pled guilty to felony battery with intent to cause bodily harm, and was sentenced to six months in jail and three years’ probation. Over the next seven years, Brooks had a series of short stints in jail for various drug and obstruction charges.

In 2006, he was convicted of felony statutory sexual seduction for impregnating a 15-year-old girl. Brooks was 24 years old at the time. He was sentenced to probation and required to register as a sex offender.

In 2010, Brooks pled no contest to felony strangulation and suffocation charges, as well as to violating the terms of his probation. He was sentenced to 11 months in jail and three more years of probation.

Brooks spent much of 2011 and 2012 in jail, serving two separate 180-day sentences for charges of drug possession and bail jumping, and a 37-day sentence for misdemeanor resisting arrest.

In 2016, Brooks was arrested and charged with failing to obey Nevada’s sex offender registration laws. He posted bail, then fled the state and never returned to court. He still has an active warrant out for his arrest in Nevada.

In July 2020, Brooks was again arrested after allegedly getting into a fist fight with his nephew over a cellphone and then firing a gun at the nephew’s car as the nephew drove away. Arresting officers found Brooks still in possession of the firearm as well as a small amount of meth. He was charged with a slew of serious felonies, including possession a firearm as firearm and two counts of second-degree recklessly endangering public safety with the use of a firearm.

Brooks’ bond was initially set at $10,000 but was quickly lowered to $7,500. He remained in custody until his Feb. 9 trial was postponed. His attorney then successfully argued for Brooks’ bail to be dropped even lower, and on Feb. 21, Brooks posted $500 bond and was released.

On Nov. 5, with his 2020 charges still pending, Brooks was again arrested and charged with several serious felony offenses after a woman—reportedly the mother of Brooks’ children—told police that he purposefully ran her over with a vehicle after an argument. According to reports, the vehicular assault left tire marks on the woman’s pants and injured her so severely that she was hospitalized.

Incredibly, despite two decades of violent behavior, an open felony warrant in Nevada, routine failures to abide by his probation or bond conditions, and an active case involving the violent use of a weapon, Brooks was allowed to post $1,000 cash bail. By Nov. 11, he was back in the community.

When all relevant information comes to light about possible motive or premeditation, it seems incredible that no one could have reasonably foreseen that Brooks would commit this specific type of violence and leave this amount of carnage in his wake.

Brooks’ propensity for violence and his lifetime spent disregarding the safety of others made a violent tragedy anything but unforeseeable.

It also could have been foreseen that this kind of tragedy would inevitably occur as a result of the well-intentioned but ill-thought-out and poorly executed bail reform policies that progressives are putting into effect across the country.

In fact, John Chisholm, the rogue George Soros-backed prosecutor in Milwaukee County who released Brooks when he should have sought no bail, issued a prophetic statement in 2007. He said: “Is there going to be an individual I divert, or I put into [a] treatment program, who’s going to go out and kill somebody? … You bet. Guaranteed. It’s guaranteed to happen.” He went on to argue, though, that “does not invalidate the overall approach.”

We disagree. And now that the dire consequences of these rogue prosecutors’ policies are sparking public backlash, Chisholm has called for an investigation into Brooks’ “inappropriately low” bond.

Unfortunately, this is emblematic of the rogue prosecutor movement more generally. They take a criminal-first, victim-last, passing-the-blame approach.

And while the consequences here were undoubtedly tragic, it’s far from the only example of rogue prosecutors’ lax bond policies wreaking havoc on their communities.

In Chicago, police have pointed to the “skyrocketing use of electronic monitoring as a key factor in the city’s shocking 50% rise in killings” last year.

And no wonder. In Kim Foxx’s Chicago, there are apparently no consequences for violating bail terms. According to the Chicago Tribune, “About 400 people are charged every year with felony escape. During [her predecessor’s] last three years in office, she dropped a total of 55 such cases, compared with 420 for Foxx.”

And then there’s San Francisco’s Chesa Boudin. As two of us (Cully and Zack) have previously written, “Since taking office, Boudin has also been criticized for releasing suspects with long criminal records who have gone on—surprise, surprise—to commit other crimes.”

The events in Wisconsin were tragic. But the nightmare was a completely avoidable consequence of a criminal justice system run by Soros’ rogue prosecutors.