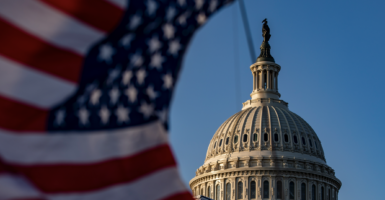 Republicans released their "Commitment to America," promising to fight for a strong economy, a safe nation, and an accountable government. Pictured: The Capitol on Dec. 18, 2019. (Photo: Samuel Corum/Getty Images)

House Republicans released their “Commitment to America” on Thursday morning, promising to fight for a strong economy, a safe nation, a future built on freedom, and a government accountable to its people.

The Commitment to America promises that Republicans will fight inflation and lower the cost of living, curbing “wasteful government spending that is raising the price of groceries, gas, cars, and housing” as well as increasing take-home pay, creating jobs that pay well, and stabilizing the economy through “pro-growth tax and deregulatory policies.”

In efforts to make the United States a safe nation, the Republicans promised to secure the border, combat illegal immigration, reduce crime, protect public safety, and defend the United States’ national security by supporting troops and investing in an “efficient, effective military.”

Part of the “Commitment to America” also focuses on a “future that’s built on freedom”—including efforts to promote student success and giving parents a say in their children’s education and defending fairness in women’s sports. And as part of this focus on a future that’s built on freedom, lawmakers also promised to confront Big Tech and demand fairness, as well as to help Americans achieve longer, healthier lives.

To hold the government accountable, Republicans promise to uphold free speech, protect the lives of both unborn children and pregnant mothers, and to protect religious freedom and the Second Amendment.

Holding Washington accountable includes conducting “rigorous oversight to rein in government abuse of power and corruption,” providing “transparency to the American people,” requiring “the White House to answer for its incompetence,” and saving and strengthening “Social Security and Medicare” as well as reducing national debt.

The Republicans also promise to “end special treatment for members of Congress by repealing proxy voting, and increase accountability in the election process through voter ID, accurate voter rolls, and observer access.”

“Fortunately, conservatives in Washington are coming to the rescue. From putting parents in charge and reversing inflation to securing the border and countering Communist China, the Commitment to America is a welcome plan for the 118th Congress,” Roberts said.

“We need more leaders who have the courage to put forward an agenda, and I applaud Leader [Kevin] McCarthy for encouraging his caucus to do so,” he added. “Conservatives expect both a plan from congressional leaders and the commitment to follow through on that plan. The Heritage Foundation is proud to have worked with Leader McCarthy on this agenda and we are ready to fight for these ideas in the next Congress.”

Heritage Action Executive Director Jessica Anderson also applauded the plan, praising McCarthy for putting together “a clear plan to take on the nation’s most pressing issues.”

“Now more than ever, America needs leadership from Congress and solutions like these that will support American families and restore American greatness,” she said. “Heritage Action is committed to fighting for the Commitment to America alongside our Seven Priorities in the next Congress.”