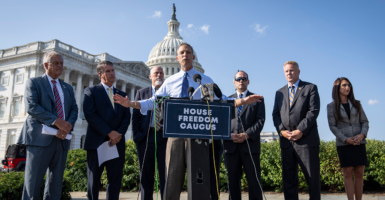 "Why would Republicans cast one vote in favor of this tyranny?" Rep. Scott Perry, R-Pa., asks during a Thursday press conference held by the House Freedom Caucus on Capitol Hill. (Photo: Drew Angerer/Getty Images)

The leader of the House’s most conservative caucus is calling on party leadership to prevent “leftist Democrats” from getting “another bite” at tyranny as Congress prepares to vote on a short-term government spending bill before the fiscal year ends Sept. 30.

“We call on each and every Republican to vote ‘no.’ Vote ‘no’ to continued spending that supports these outrageous policies, especially when reinforcements are just over the horizon,” Rep. Scott Perry, R-Pa., chairman of the House Freedom Caucus, said at a press conference Thursday outside the Capitol.

Perry listed COVID-19 vaccine mandates, the energy and border crises, an “out-of-control, weaponized bureaucracy,” and the FBI raid of former President Donald Trump’s Florida home as examples of why Republicans should not vote for Democrats’ spending bill.

Lawmakers are working on a short-term spending bill, called a continuing resolution, that would fund the government through early December and avoid a government shutdown before the fiscal year ends Sept. 30, Fox News reported.

Congress so far has been unsuccessful in passing a spending bill and is unlikely to do so before the deadline, hence the need for a continuing resolution to keep the government running, CBS reported.

Perry told reporters that the House Freedom Caucus is asking House Whip Steve Scalise, R-La., “to request that every single Republican vote ‘no.’”

The continuing resolution would have to pass in both the House and the Senate so that President Joe Biden could sign it into law ahead of the Sept. 30 deadline, Roll Call reported. The resolution requires the support of at least 10 of the 50 Senate Republicans to succeed, CNN reported.

Prior to the press conference, Rep. Chip Roy, R-Texas, said he had attended a roundtable discussion with about 12 families with relatives who died from fentanyl poisoning.

“That’s what happening in our country right now because of [the] policies of this administration,” Roy said. “Wide-open borders empowering cartels to put pills into our communities laced with fentanyl causing 79,000 people to die in the last year. The No. 1 cause of death for people aged 18 to 45.”

“This is avoidable, but it’s being purposefully done by a radical Left administration that is endangering the American people and endangering migrants when they say that they’re helping those migrants. Thousands of dead migrants on ranches in South Texas. All of this is happening in real time,” he said.

Are we going to continue to fund the very bureaucracy that is causing Americans to die, causing cartels to get empowered, our borders to get overrun, Texans to get endangered?

Are we going to continue to fund a bureaucracy that is targeting parents, labeling them as ‘domestic terrorists’ for daring to go to a school board and challenge them if their daughter got raped in a bathroom?

Roy said the message of the House Freedom Caucus to Democrats is to “stop screwing over the American people.”

“If Kevin McCarthy cuts a bad deal in the lame duck, it could make it harder for him to win the speaker vote, and so that’s a leverage point that the Freedom Caucus is trying to exert on Kevin McCarthy,” Dickerson said.

Republicans are pushing for McCarthy to focus on their policy priorities such as cutting spending, regulations, and stopping “all the stuff that Biden is doing” rather than caving to Pelosi, he added.

It’s time for Republicans to stand up and unite. We cannot green-light one more liberal priority that will simply send America further in the wrong direction.

We must show strength now and prove to the American people that we will end the madness in Washington and return power back to them, where it rightly belongs.

Editor’s note: This article has been corrected to reflect that the lawmakers working on the short-term spending bill were from both chambers of Congress.