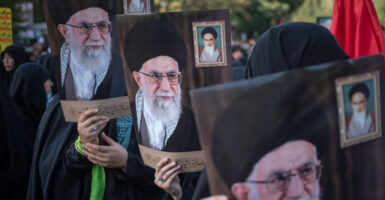 If Iran's supreme leader, Ayatollah Ali Khamenei, reported to be ill, were to die after a nuclear deal is sealed with the U.S., his successor could decide to abandon the deal or covertly violate it. Pictured: Iranian women display portraits of Khamenei at an anti-Israel protest in Tehran on Aug. 9. (Photo: Morteza Nikoubazl/ NurPhoto/Getty Images)

Rumors of the declining health of Iran’s supreme leader, Ayatollah Ali Khamenei, have further complicated the cost-benefit calculus for U.S. policymakers on the Iran nuclear issue.

Khamenei’s health problems would make another nuclear deal even more risky than the original agreement of 2015. As the ultimate decision-maker in Iran’s Islamic revolutionary regime, the supreme leader’s blessing is necessary for Tehran to reach any nuclear agreement.

The death or incapacitation of Khamenei, who has ruled since 1989, would likely plunge Iran into a period of political uncertainty and possible instability.  The 83-year-old ayatollah reportedly was treated for prostate cancer in 2014, and unconfirmed reports regularly surface about his health problems.

If Khamenei dies before a final agreement is reached, the negotiations could not be concluded until after a new supreme leader is anointed by Iran’s Assembly of Experts, an opaque process that could take months.

Meanwhile, Iran’s accelerating uranium-enrichment efforts would bring it ever closer to a nuclear weapon.

On the other hand, if Khamenei dies after a deal is sealed, his successor could decide to abandon the deal or covertly violate it.

The harsh repression, economic failure, and entrenched corruption during Khamenei’s rule have fueled rising political opposition and widespread resentment of the regime. As a result, the next supreme leader is likely to be even more dependent on the repressive organs of the state, particularly the Islamic Revolutionary Guard Corps, which controls Iran’s nuclear program, ballistic missile arsenal, and large swaths of Iran’s economy.

The Revolutionary Guard Corps opposes any meaningful restrictions on Iran’s nuclear and missile programs, the crown jewels of its military power and political influence.

With the supreme leader unwell and no clear successor, the last thing the White House should do is pursue any policy that pours tens of billions of dollars into an Iranian system whose leadership is uncertain.

Because of the stranglehold the Revolutionary Guards and senior clerics have over the economy, any sanctions relief or new investment now would disproportionately favor the consolidation of power by Iran’s most hard-line elements.

Time to Get Tough on Iran

Iran has slow-walked the negotiations to revive the 2015 nuclear agreement, seeking to squeeze maximal concessions from a Biden administration desperate to sign a deal.

Tehran undoubtedly calculates that its surging uranium-enrichment efforts strengthen its diplomatic leverage, while Europe’s energy crisis due to Ukraine-related sanctions against Russia will stimulate Europe’s appetite for Iranian oil exports and undermine the sustainability of U.S. oil sanctions against Iran.

Iran’s regime, therefore, felt free to double down on its negotiating demands in recent weeks. The European Union, which is mediating the indirect talks between Iran and the United States, presented the “final” text of a proposed agreement to Tehran on Aug. 8, with a deadline for Tehran to answer “yes or no” by Aug. 15.

Iran responded by insisting on unacceptable changes, including guarantees that it will receive compensation and the U.S. will “pay a price” if Washington withdraws from the deal, that foreign companies that invest in Iran will be protected from U.S. sanctions, and that Iran will receive some front-loaded sanctions relief before Congress reviews the deal.

After the U.S. agreed to offer some front-loaded sanctions relief, but refused Iran’s demand for other guarantees, Iran responded with another unacceptable demand; namely, to shut down the International Atomic Energy Agency’s ongoing investigation of Iran’s violation of its nonproliferation commitments under its Comprehensive Safeguards Agreement.

Secretary of State Antony Blinken on Friday stated that the Biden administration remains committed to the nuclear negotiations, albeit with this caveat:

However, the latest response takes us backwards, and we are not about to agree to a deal that doesn’t meet our bottom-line requirements and/or that tries to continuously introduce extraneous demands that are not relevant to the [Joint Comprehensive Plan of Action] itself.  If we conclude a deal, it’s only because it will advance our national security.

But it’s difficult to see how U.S. national security will be advanced by a flawed agreement with a regime that continues to flout its nuclear nonproliferation commitments, to launch proxy attacks against U.S. troops and allies in the Middle East, and to orchestrate efforts to assassinate former U.S. officials, including former national security adviser John Bolton, former Secretary of State Mike Pompeo, former Secretary of Defense Mark Esper, and former State Department Iran policy coordinator Brian Hook.

The Biden administration has turned a blind eye to those flashing warning signs and remains more concerned about the negative political consequences of a bad nuclear deal for itself than for Iran.

Bipartisan congressional opposition to a prospective deal has steadily risen as more details about the negotiations have emerged. For this reason, the Biden administration is unlikely to sign any agreement until after the Nov. 8 congressional midterm elections.

Was Iran Behind Attempt to Kill Salman Rushdie in America?