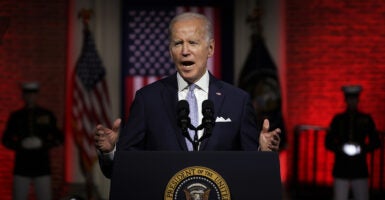 Last week, this column focused on the eye-opening recent revelations from Missouri and Louisiana’s lawsuit, still ongoing, that exposes the depth and breadth of the collusion between the Biden regime and the oligarchs of Big Tech.

Those lightly redacted documents, made public via a Twitter thread from Missouri Attorney General Eric Schmitt, shine a spotlight on the extent to which numerous governmental agencies and high-ranking apparatchiks within the Biden administration worked hand-in-glove with Facebook and Twitter to censor and suppress dissident COVID-19 “misinformation” that threatened to destabilize the ruling class’s ill-gotten perch atop America’s social hierarchy.

The result of Schmitt’s revelation is to clarify the exigency of the present moment insofar as the collapse of any purported distinction between the “public” sector and the “private” sector is concerned.

Though now crystallized for a mass audience, many on the right have intuited that urgency for a while now, going back at least as far as U.S. Supreme Court Justice Clarence Thomas’ seminal concurrence last April in Biden v. Knight First Amendment Institute, in which Thomas suggested the legal framework of “common carrier” regulation as one possible remedy for our Big Tech woes.

But the problem is hardly exclusive to the technology industry. Social media deplatforming and algorithmic manipulation remain huge problems demanding clear, forthright public policy responses, but the same underlying sentiment—the arrogant and malicious impulse to subjugate and “other”-ize the “deplorable” half of American society, humiliating them into second-class subjection—is already playing out in other industries as well.

De-banking—the politicization of lines of credit and the severing of basic financial services to “controversial” conservatives—is already very much here to stay. Just ask (recent congressional candidate) Laura Loomer about PayPal, or ask the spirited Canadian truckers (remember them?) about GoFundMe. In recent years, moreover, conglomerates such as Bank of America have stopped lending to certain firearms manufacturers—the very defenders, in this case, of the Second Amendment. Other examples abound.

Considering that a widely accepted element of “fascism” is the cooptation of the “private” sector by the “public” sector, especially in service of entrenching a one-party state, it is one of the greatest ironies of our age that the political party seemingly seeking to do precisely that can unironically slander its preeminent partisan rival as somehow being filled with “semi-fascists.”

Indeed, as many have pointed out, the man now lambasting his political foes as “semi-fascist” is the same one who just sent the federal law enforcement to execute a predawn raid on the private residence of his former, and perhaps future, ballot box opponent. Alas, self-awareness is not one of Uncle Joe’s strengths—nor, for that matter, is a rudimentary familiarity with Western history.

That vile oration, which posited that so-called MAGA Republicans have replaced Nazis, Soviets, and radical Islamists as the true enemies of America, can only be interpreted as a de facto declaration of war from the president of the United States on half of the very sovereign citizenry from whom he derives any putative legitimacy.

In its rancor, partisan vitriol and deliberate siccing of some Americans upon their fellow countrymen, Biden’s speech was the opposite of the sentiment expressed in Lincoln’s magisterial Second Inaugural Address: “With malice toward none, with charity for all, with firmness in the right as God gives us to see the right, let us strive on to finish the work we are in, to bind up the nation’s wounds.”

There are no easy panaceas for lifting us out of this (largely self-induced) mess. Certainly, ballot box remedies in 2022 and 2024 can, and hopefully will, help. God-willing, there are enough kindhearted Americans remaining to soberly recognize that a two-tiered America is an “America” in name only, and to vote out the bums who have fomented such a terrifying reality. There is nothing good down that rabbit hole. Anyone who has ever thumbed through a history book can tell you how that story ends: not well, and sometimes with great bloodshed.

In the interim, and as but one means of attempting to forestall our continued descent into the two-tiered abyss, the right must aggressively double down on its already-ascendant populist realignment on issues pertaining to political economy.

Common carrier regulation for some of the leading Big Tech behemoths, and likely the titans of other industries such as private and commercial banking, ought to be a no-brainer at this juncture.

The right must also continue to evolve on its approach to antitrust; some leading Republicans, such as Sen. Josh Hawley, R-Mo., have led the way on this, and others must now join along.

Amid the collapse of the “public”-“private” distinction and the “other”-izing of half the citizenry by no less than the president himself, the stakes could not be higher.

For instance, the antitrust debate now is not an academic one about the continuing relevance of Robert Bork’s “consumer welfare standard”; rather, it is about securing the very ability of half the citizenry to conduct their lives with access to the most basic means and institutions of civil society. The debate is less about economics and more about dehumanization.

The passing of the iconic Queen Elizabeth II this week is a somber occasion, but it is also imperative that Americans not forget the core lesson of our 18th-century independence from Britain: Tyranny, on this land, will not be abided. The onus is now on the right to act accordingly, as our late-stage republic seemingly hurdles ever closer to the brink.

This article has been corrected to reflect the correct term for Robert Bork’s “consumer welfare standard.”