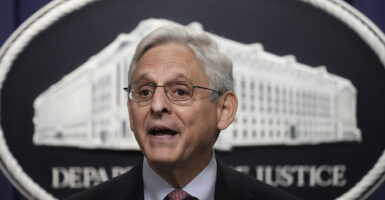 The president of the Catholic League on Thursday sent a letter to the Justice Department's inspector general about the apparent anti-religious bias of a top official of the department. A copy of the letter was sent to Attorney General Merrick Garland, seen here speaking at the Justice Department on Aug. 2. (Photo: Drew Angerer/Getty Images)

Bill Donohue, the president of the Catholic League for Religious and Civil Rights, on Thursday sent a letter to Justice Department Inspector General Michael Horowitz calling for an investigation of a department official for apparent anti-religious bias.

As The Daily Signal first reported on Monday, Eric P. Bruskin, assistant director of the commercial litigation branch in the Justice Department’s Civil Division, called the Christian legal organization Alliance Defending Freedom a “hate group” in a comment on LinkedIn.

Bruskin’s former colleague, Jason Weida, had written on LinkedIn that he was “honored to speak with [senior counsel] Matt Sharp” at an Alliance Defending Freedom conference. Bruskin commented in response to Weida’s post: “Jason, this is a hate group. You’re speaking at a conference for a hate group. Are these the beliefs you hold? If so, then it’s time we end our professional association.”

Fred Lucas and Roman Jankowski, writing for The Daily Signal, contended that Bruskin “appeared to follow the lead of the Southern Poverty Law Center, a left-wing group that regularly brands Alliance Defending Freedom and other conservative organizations ‘hate groups.’”

Donohue said that Bruskin’s comment violates Justice Department rules regulating employees’ conduct on social media. The department’s website states: “Department employees should not make comments that can be perceived as showing prejudice based on race, gender, sexual orientation, or any other protected basis.”

‘Hate group’ should be reserved for terrorist groups like the Klan and Antifa. Most important, it is one thing for partisan activist entities to label ADF a ‘hate group,’ quite another when someone in a senior DOJ position does.

Donohue also sent a copy of his letter to Attorney General Merrick Garland.

Bruskin’s characterization of the Alliance as a “hate group” would likely apply to the Catholic League as well, Donohue suggests, adding, “We are not about to wait until some DOJ figure like Bruskin thinks he can abuse his office by targeting us.”